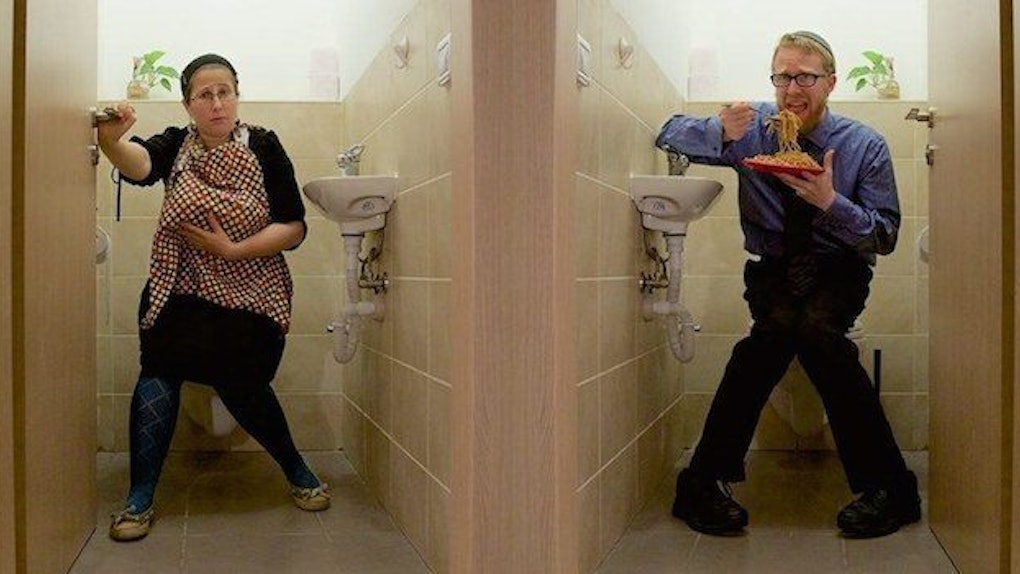 This Photo Shows Why Mothers Shouldn't Have To Breastfeed In Bathrooms

To her surprise, it quickly went viral.

On one side of the photograph, a mother breastfeeds in a bathroom stall; on the other side, a man eats a plate of spaghetti in an identical stall. Both look extremely uncomfortable.

I should feed my baby where? My baby eating is not a gross side-effect of having children. If you are not willing to eat your lunch in the bathroom, then don't expect to me feed my kid there.

Inspired by the week's prompt, “Make a statement,” Shugert's aim was to protest the notion that breastfeeding should only be done behind closed doors.

In an interview, the mother of three admitted she was shocked how popular her photo became because in Israel, breastfeeding remains a relatively taboo topic.

Some of the commenters were saying that breasts shouldn't be sexual, but I believe that breasts have a dual purpose. In my culture -- Orthodox Judiasm -- sexuality is used as a powerful force within marriages and not something to be shown to everybody.

And women shouldn't be forced into unhygienic or uncomfortable conditions to feed their children.

I believe that everyone should feel comfortable in their day-to-day life, whether it's nursing, or having lunch, or both.

Cofounder of 52Frames, Shai Davies, couldn't be happier about the recognition that Shugert's photo has garnered.

If a picture is worth a thousand words, Tamar's photograph could fill entire libraries.

We couldn't agree more. See the powerful photograph below.

Citations: This Photo Perfectly Sums Up Everything Wrong With Expecting Mothers To Breastfeed In The Bathroom (Buzzfeed)