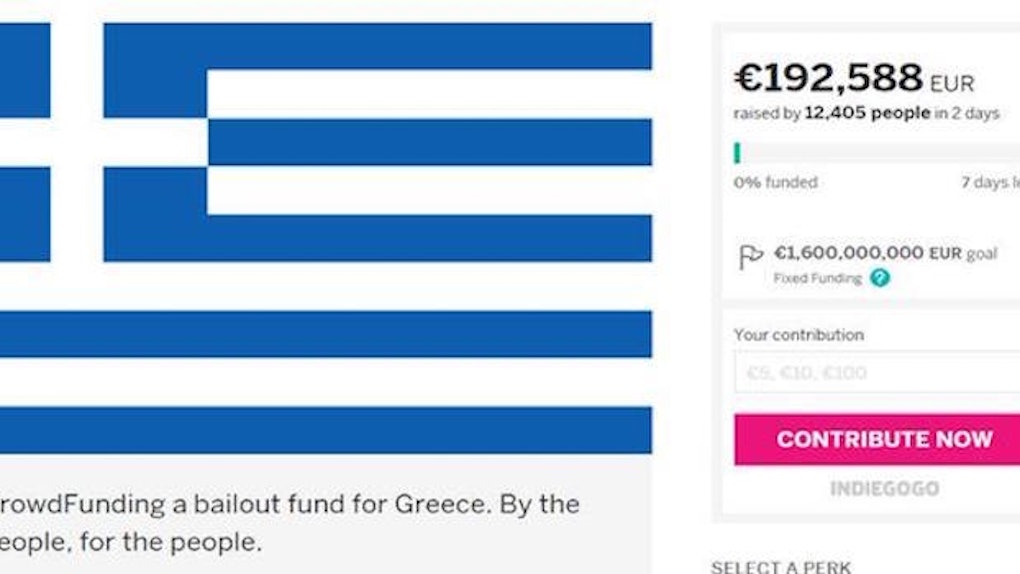 Man Launches A Crowdfunding Campaign In Order To Bail Out Greece

London's Thom Feeney is tired of watching politicians unsuccessfully debate how to bail out Greece.

So, the 29-year-old shoe store employee came up with an alternative solution to obtain about $1.8 billion: Leave it up to the people.

Feeney started a crowdfunding campaign on Indiegogo, asking Europeans to think of the Greek people as "cousins," since the nation is a proud member of the European Union.

On the campaign page for the Greek Bailout Fund, he wrote,

I was fed up of the Greek crisis going round in circles, while politicians are dithering, this is affecting real people. While all the posturing is going on, then it's easy for the politicians to forget that. I just thought, sod it, I'll have a crack.

Feeney points out there are approximately 503 million people living in the countries joined by the European Union.

So, if each EU citizen donated just a little over $3, Greece's economic turmoil would be lessened.

We promise that all profits will go to the Greek people and all products will be 100 [percent] Greek.

He ensures them the campaign is most definitely not a joke nor a political statement, and he says all the money will be refunded if the target is not reached.

I'm confident the people of Europe will get this campaign and some time soon we'll all be raising a glass of Ouzo and having a bloody great big celebration.

The only question left is how Greece will actually receive the money; Feeney is trusting Indiegogo and a crew of "better qualified" people to make it happen.