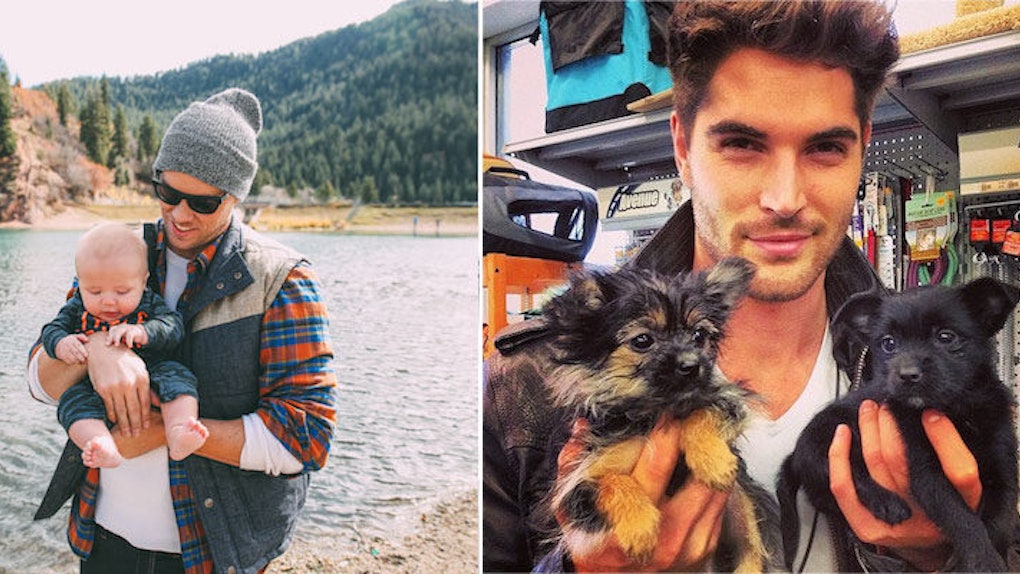 Guys With Dogs And Babies Really Are More Attractive To Women

Can we please be honest for a second? There is nothing hotter than a guy with a dog. Wait, actually, there is: a guy with a baby.

Hold up, could you ever really choose which is hotter? I mean, do we really need to make a choice? Can't we all just agree that guys with dogs or babies are hotter than the rest?

I know you agree. There's just something so attractive about a guy who is responsible for something that walks on all fours.

New Instagram accounts like Hot Dudes With Dogs and Tumblr pages called Hot Men With Babies have us gripping our phones a bit tighter than we normally do, and it's no surprise they've been exploding in the news and across the web.

Seriously, they're having a moment.

If you have a thing for dudes with dogs and men with babies, you're not alone: There is actual science out there that proves it's totally normal for us.

Guys who have responsibilities are so much sexier

A survey with 2,000 British participants found  one in five women instantly think a man with a dog is far more attractive than guys who don't have a canine companion.

Those surveyed also felt owning a dog is twice as hot as having a big income, and only one in 20 women found men in designer clothes immediately attractive the way they did when they saw dudes with dogs, the Daily Mail reports.

And it turns out women find men who know how to take care of a baby more attractive, too. NYMag reports women are far more likely to give their number to guys who played with a baby.

A study published in the Journal of Human Behavior in the Social Environment showed women gave a guy their cell number 40 percent of the time he asked after they saw him playing with a baby in a waiting room.

When the man didn't play with the baby and then proceeded to ask the women for their numbers, he only received the digits 12 percent of the time.

The simple explanation for why girls always choose guys who look after a baby or are responsible for a pet is just that: They appear to be more responsible, and they look like they can take care of themselves as well as a partner.

Not having to tell a guy to do very basic things like take daily showers and eat three meals a day really just makes us go wild.

Obsessing over guys with dogs and babies is totally instinctual

Finding a man with a smaller, four-legged companion by his side insanely hot is just part of the survival complex.

Historically, women were attracted to the provider -- the alpha male who had the most resources to provide for her children. This innate survival method ensured the longevity of a woman's offspring.

Parenting Science says women still naturally seek out defining qualities in a man that would set them up to be great dads, in both physical and mental aspects.

The study determined women are actually able to choose a man who enjoys taking care of and being responsible for an infant just by facial photographs. It's scary but true; women are truly the smarter sex.

And while that might seem like a sixth sense women possess, it may just be more about avoiding the guys who look completely incapable of taking care of themselves, not to mention a baby.

Guys with dogs and babies are usually healthier and more fit

The fact that we're all more attracted to guys who have a dog or baby may not even be that we're looking for someone to care for our offspring.

It could just be that we're turned on by hot bodies and healthy dudes.

There are tons of studies that show the positive health effects of owning a pet.

Not only are puppies date magnets, but WebMD reports they're good for your heart, mind and soul. Having a dog has proven to reduce cardiac stress, and owning a dog is a lifestyle that promotes regular exercise and daily high-energy activities.

Finally, cuddling with a canine produces the same endorphins women feel when beginning the relationship with their babies.

So wait, not only is he hot, but he's a cuddler? Score.

The same goes for men who have a child. Chances are, visiting the park, chasing their little one as they try to escape the perils of their stroller and cleaning up after their babies' messes are giving dads a little extra workout.

Do you see the legs on that guy chasing after his baby? Those calves, though...

There really is no arguing it. Dudes with dogs and guys with babies are the hottest men in the world, and they have us drooling all over social media and in real life.

For whatever reason, people feel like men on the street carrying a kid or walking a dog seem more approachable. And guys, having one of these hot items by your side makes for an excellent ice breaker.

So, if you own a puppy or small child, turn off your computer and go for a walk with your little friend. They'll thank you, and women may actually give you a shot.