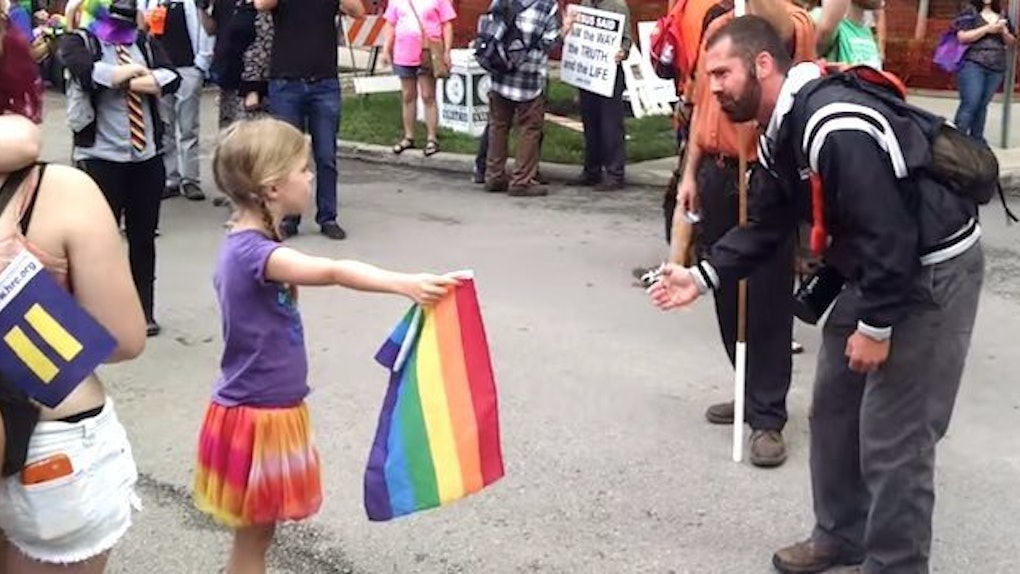 Many people are rallying in support of the young girl who stood up against a homophobic preacher during a recent festival in Columbus, Ohio.

Earlier this week, a video surfaced online showing a first grader named Zea silently waving a rainbow flag while the preacher ranted about the "sins" of homosexuality.

The inspiring footage quickly went viral after the girl's father, Ryan Bowling, posted it to YouTube, along with a caption commending the young girl for her actions.

Zea faces down a fire and brimstone street preacher, at a festival in Columbus, the day after the SCOTUS marriage equality ruling.

According to a post on Bowling's Facebook page, the preacher was raving about Jesus and how sodomy is a sin.

When Zea approached, however, he allegedly “deflated visibly” and quieted down, Daily Mail reports.

Dozens of onlookers then approached the young girl to give her high fives and praise her for displaying such strength and good will.

A witness named Zachary Traxler was so moved by Zea's actions, he decided to do something amazing. He created a t-shirt with an image of her approaching the preacher on the front and a printing of the 14th Amendment on the back.

The tees will be available starting July 13 for $18 to $28 at Traxler Tees, and all proceeds will be donated to an LGBT nonprofit of Zea and her family's choice.

Watch the inspiring video below.