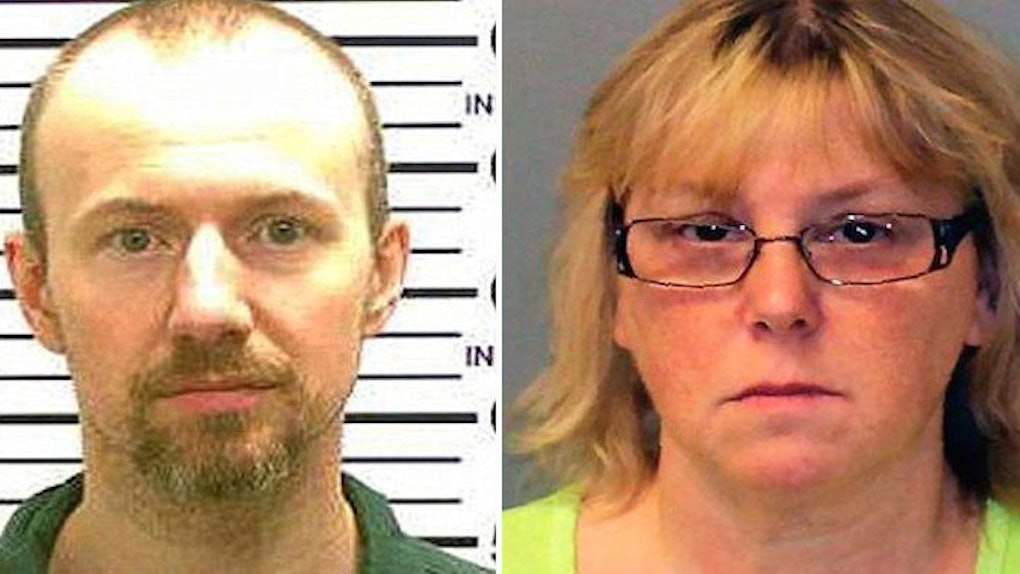 The prison worker responsible for the escape of two convicted murderers reportedly used to have sex with one of them four times a week.

A former inmate at Clinton Correctional Facility told the New York Post Joyce Mitchell would have sex with David Sweat in a storage room of the prison's tailor shop where she supervised the inmates.

Sweat, 35, and Richard Matt, 48, received power tools hidden in frozen meat from Mitchell that allowed them to tunnel out of the prison on June 6.

Mitchell, who has been arrested and charged with aiding the escape, previously confessed to having sex with Matt.

And now Erik Jensen, who also worked at the tailor shop of the prison, claims Mitchell, 51, often spent 30 minutes in the storage room with Sweat and had sex with him up to 100 times, according to the Daily Mail.

Jensen told the Post Mitchell would tell the other inmates she and Sweat were going into the private quarters alone to count clothes.

But the tailor shop workers instantly recognized the lie; it was obvious Mitchell was attracted to Sweat, who was serving a life sentence for killing a sheriff's deputy.

Jensen described how she lit up whenever Sweat was near her,

...that look on her face. She was ecstatic.

He said Mitchell's reaction to Sweat's presence reminded him of an unpopular high school girl being approached by a "good-looking [jock]."

Sweat was removed from the tailor shop at some point over the past year after Mitchell was investigated for conducting an inappropriate relationship with him.

Mitchell was not charged, however, since there was no hard evidence of their trysts.

She was supposed to be the escapees' getaway driver but bailed on them at the last minute, possibly because the pair told her they were going to murder her husband.

Lyle Mitchell recently told "Today" his wife of 14 years previously swore on her son's life she did not have sex with the two inmates.

Authorities are currently searching for Matt and Sweat in upstate New York after discovering DNA belonging to the inmates in a cabin not far from the prison.