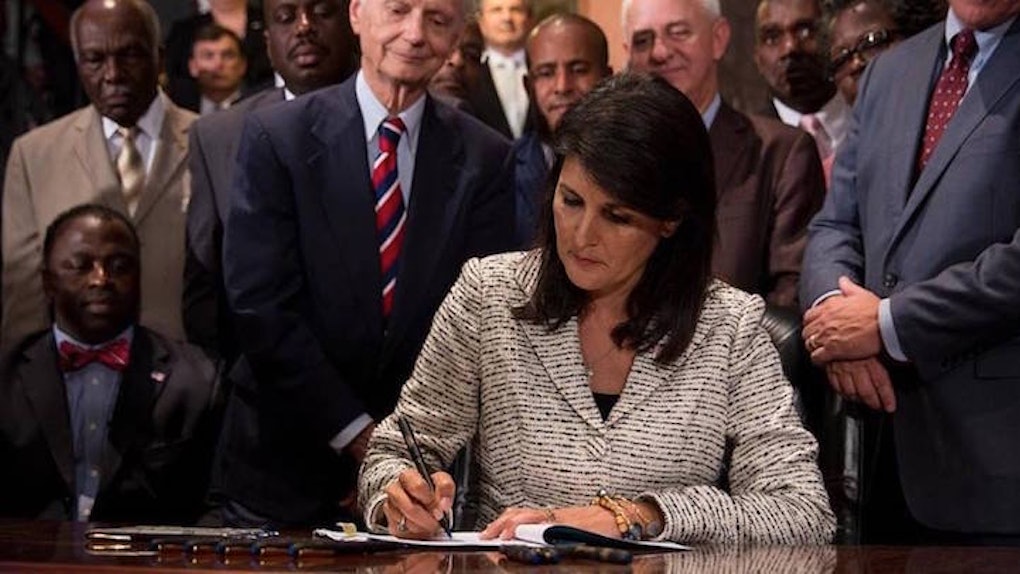 The Confederate flag flying outside the South Carolina Statehouse was taken down at 10 am today.

Republican Governor Nikki Haley called for the flag to come down just days after nine people were killed by shooter Dylann Roof, 21, at Emanuel African Methodist Episcopal Church in Charleston on June 17.

I just had to do this. I had to. It's one of those times when I'm completely at peace with this. I just didn't question it for a second.

The flag, which was originally created to represent the Confederate States Army, was toted by Roof in various photos and appears on his license plate.

Haley signed a bill regarding the flag's removal not long after the South Carolina House of Representatives approved the measure by a vote of 94 to 20 on Thursday, Yahoo! News reports.

House lawmakers debated the issue for over 13 hours, partially because some wanted to amend the bill to protect the flag's future.

Those efforts were quashed, however, due to the fact that they could delay the flag's removal by weeks or even months.

According to The Post and Courier, the Confederate flag had been atop the South Carolina Statehouse until years of protests resulted in it being transferred to a nearby Confederate Soldier Monument in 2000.

Legislators enacted a law at the time stating the flag could only be taken down from this location with a two-thirds vote from both the Senate and House.

African Americans repeatedly asked for the flag to be removed, but it wasn't until the Charleston shootings that South Carolina's government accepted the flag's association with racism.

South Carolina can remove the stain from our lives. I never thought in my lifetime I would see this.

The flag will now be placed in the state's Confederate Relic Room, which is situated not far from the Statehouse.

Here is a clip of the Confederate flag coming down: