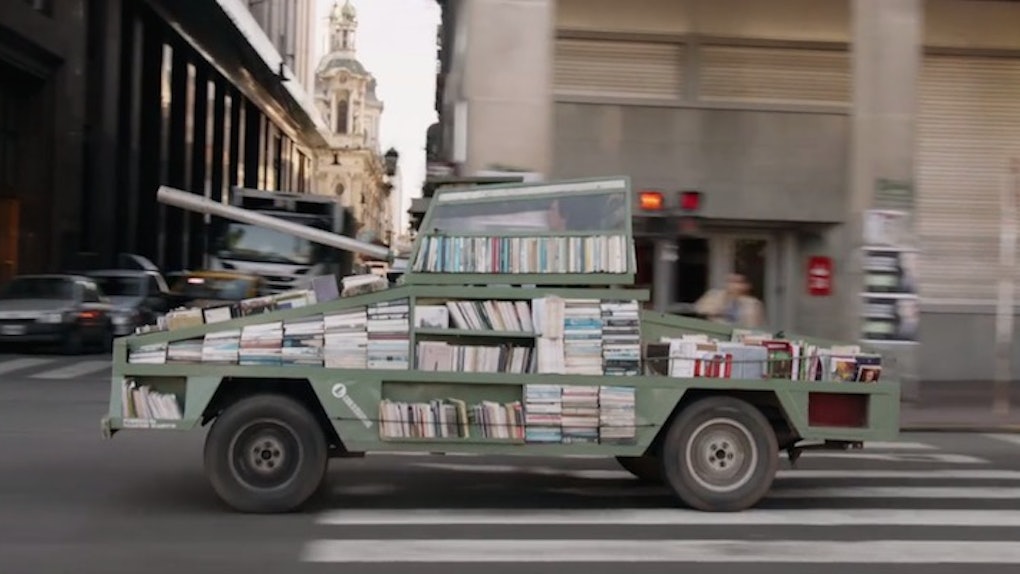 Lemesoff toured Buenos Aires in his customized, army green Ford Falcon, a vehicle historically known as the chosen transportation of his country's dictatorship in the 1970s and 80s.

Unlike his iron-fisted predecessors, Lemesoff aims to spread knowledge.

The car, filled to the brim with all kinds of books, is part of an ongoing art piece called "Weapons of Mass Instruction" (Arma de Instruccion Masiva).

With the help of 7 UP, Lemesoff filmed his creative process and resulting adventures.

Thanks to sturdy, handmade shelves, the artist has room for about 900 tomes.

If interviews with Lemesoff's friends are any indication, he's well-known as an eccentric character.

So, it makes sense he's the face of 7 UP's "Feels Good To Be You" ad campaign.

With the help of a local boy, the video recreates the famous image of a man standing in front of a tank.

Although the original was shot at 1989's Tiananmen Square protests in China, it's become an iconic image of pacifism.

And nonviolence is exactly what Lemesoff hopes to spread.

He arms his country with literature.

This 1979 vehicle is finally being put to good use.

Watch the full film below.