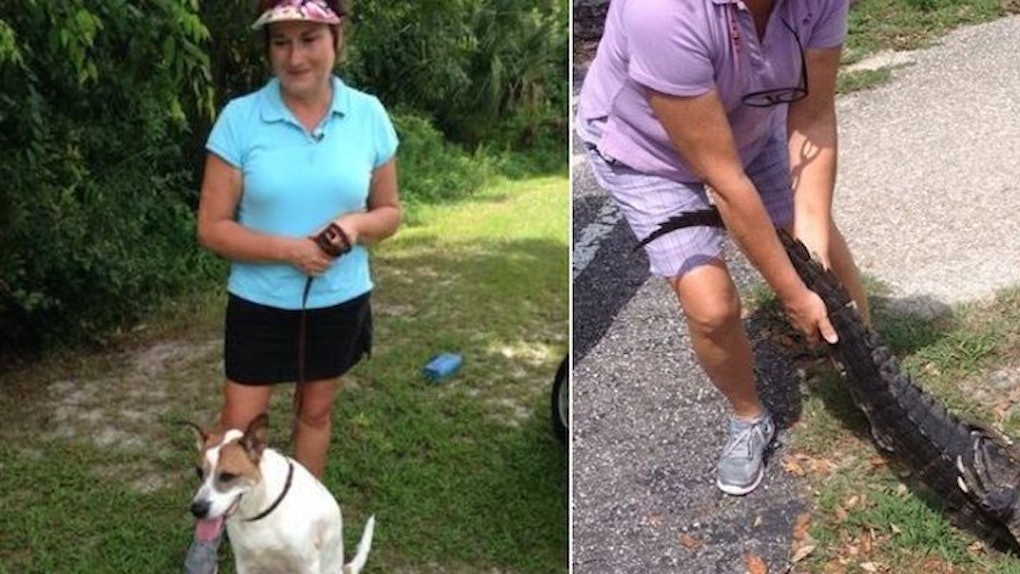 A Florida woman took on an alligator with her bare hands when the giant reptile attacked her dog.

Lori Beiswenger is the manager of the Point O' Woods Golf & Country Club in Inverness, Florida.

According to Daily Mail, she was working by a pond on the course about two weeks ago when she heard her 9-year-old dog, Hope, "screaming" in agony.

In an interview with Bay News 9, Beiswenger reportedly said,

It was the worst scream I have ever heard from her. I just ran over and I saw them rolling around on the bank. All I could see was teeth. Gator teeth and her teeth.

A 7-foot alligator had pulled her pet into the pond and locked its jaws around the dog's body.

Beiswenger didn't hesitate for a second before jumping into the neck-deep water and grabbing a hold of the alligator's tail.

I just kept pulling in, saying, 'You're not getting her, you're not going out there,' because I knew what he had in mind.

Jody Daniels, a friend of Beiswenger's who volunteers at the golf course, then went to get the dog's body with a shovel.

The alligator, however, wasn't about to give up on its prey just yet.

It charged after Hope, but Beiswenger, Daniels and a few others threw themselves on top of its body, immobilizing the alligator so they could tie up its hands and mouth.

What happened to the alligator next is not clear.

The attack left Hope with a severed artery in addition to numerous other wounds requiring stitches on her chest and side.

She underwent emergency surgery and is reported to be slowly recovering.

Beiswenger admits that she "wasn't thinking" when she challenged the alligator.

It was the dumbest, bravest thing I have ever done, but I wasn't going to let her go.

This is not the first time Hope narrowly escaped death.

The dog was due to be put down just before Beiswenger adopted her and at 2 years old,  she was hit by a car.