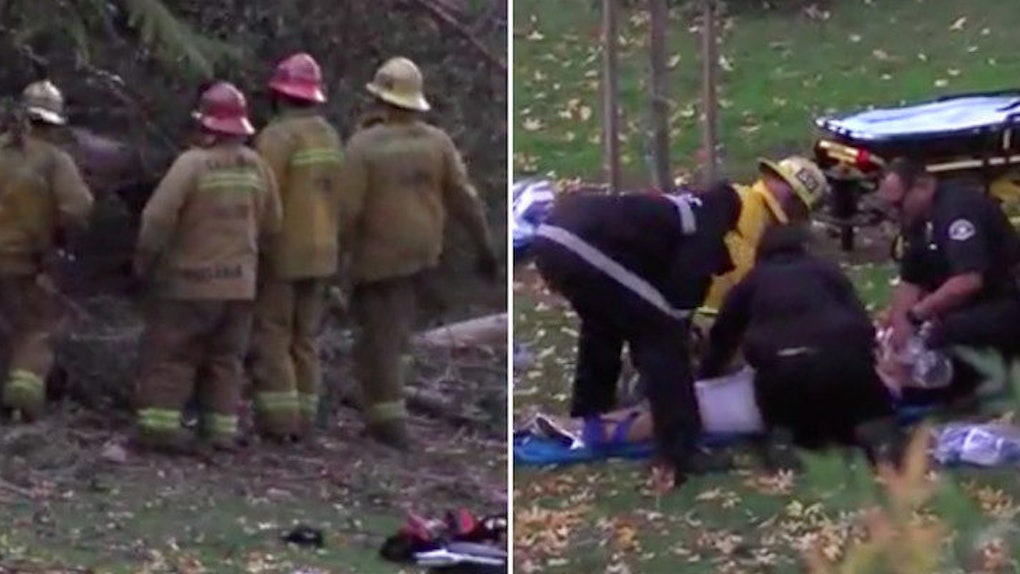 A wedding guest was killed after an 80-foot tree came crashing down while the party was taking photos in Penn Park, Whittier, California on Saturday.

Seven others, including a four-year-old girl, were injured when the tree fell around 4:30 pm.

The young girl is still in critical condition after suffering head trauma.

Witness Gilbert Duran posted a video on Facebook and described the scene like one "from a movie." He said,

I watched this thing collapse on a wedding party. It was the craziest thing I've ever seen in my life. This is just nuts, man. We watched kids go flat under the tree. We went in there, we were able to save some of the kids -- we got them out. We got the lady out -- the mother of the bride -- and she wasn't breathing man, she was already blue in the face.

Emergency services arrived on the scene to find a number of people trapped under the tree.

Other guests were performing CPR on the victims.

Video footage shows firefighters cutting away at branches in a bid to free trapped wedding guests.

The mother lost her life. A four-year-old is injured. How do you explain it? You can't. The tragedy of the situation is on the hearts and minds of many people. We need to pray for the family because of the injuries and losing someone on a day that's supposed to be a great celebration.

John Tripp, deputy chief at Los Angeles County Fire Department, said the tree is likely to have fallen due to the deluge of rain California's experienced combined with drought conditions earlier in the year.

We've seen this happen throughout Southern California with both the drought conditions — trees are stressed — and we did have a large amount of rain.