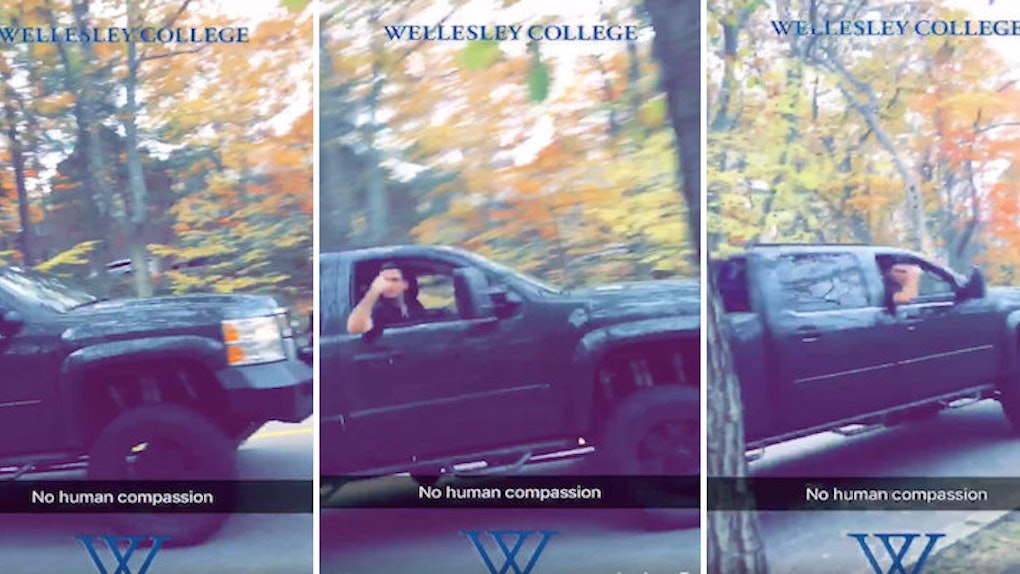 Now that we have an outwardly racist sexual predator and a homophobic misogynist serving as the two faces of our country, it seems like the rest of the bigots quietly lurking in the country are coming out of the woodwork and revealing their true racist, sexist colors.

What's even more upsetting about this event? Wellesley is Hillary Clinton's alma mater.

The fact that these bigoted, deplorable men drove to Clinton's alma mater — the place where she most likely came into her own as a woman — and proceeded to wreak havoc shocks and hurts me.

The scariest part is, these guys specifically targeted Wellesley's Harambee House. According to the Boston Globe, this house "serves as the focal point for African-American students on the women's school's campus."

And of course, because these guys are millennials, they documented their entire experience on Snapchat.

I don't know about you guys, but the majority of the men I know respect women. (This election has really driven home what a peaceful, loving microcosm I live in.) So I'm always deeply jarred by men aggressively harassing women in America.

Seeing the look of excitement and joy on the boys' faces after they literally terrorized women at Wellesley really frightens me to the core.

I can feel the subtext of his words. To me, it sounds like what he's really saying is, "The white, straight men are back in business!"

Really, dudes? Allowing minorities and queer people to coexist with you doesn't mean anything has been taken from you.

Allowing minorities and queer people to coexist with you doesn't mean anything has been taken from you.

Lawrence P. Ward, the vice president of student affairs at Babson, expressed his dismay at the boys in a letter to the Babson community. He said,

Two Babson students [on Wednesday] drove around campus in a pickup truck, waved a Trump flag, and antagonized students. Their actions, as reported to me and other college officials, were highly offensive, incredibly insensitive, and simply not acceptable.

In another statement released today, Babson College President Kerry Healey expressed that the boys' behavior is not reflective of the school. She said,

As a community that both values and stands for civility, respect, diversity and inclusiveness, the behavior we are learning about is of serious concern. It is not in keeping with the high standards to which we hold ourselves as members of the Babson community and certainly is in no way a reflection of the integrity of Babson students, generally.

Rand-Riccardi and Tomasso were also (rightfully) kicked out of their frat, Sigma Phi Epsilon.

Great job, dudes! Not only did you harass and traumatize the students at Hillary Clinton's alma mater, you also publicly embarrassed your frat and your school. Well done.

Babson is a pretty prestigious, small business school in New England for crying out loud. You would expect men getting an education of this caliber to be civilized at best. (Although, I suppose my inexplicable, lifelong anxiety surrounding frat boys isn't entirely irrational now, either.)

Sydney Robertson couldn't be more correct at the end of her post. This is NOT our America, and these men do not reflect the plethora of good, kind men in this country.

Trump's win doesn't allow anyone to get away with acts of horror.