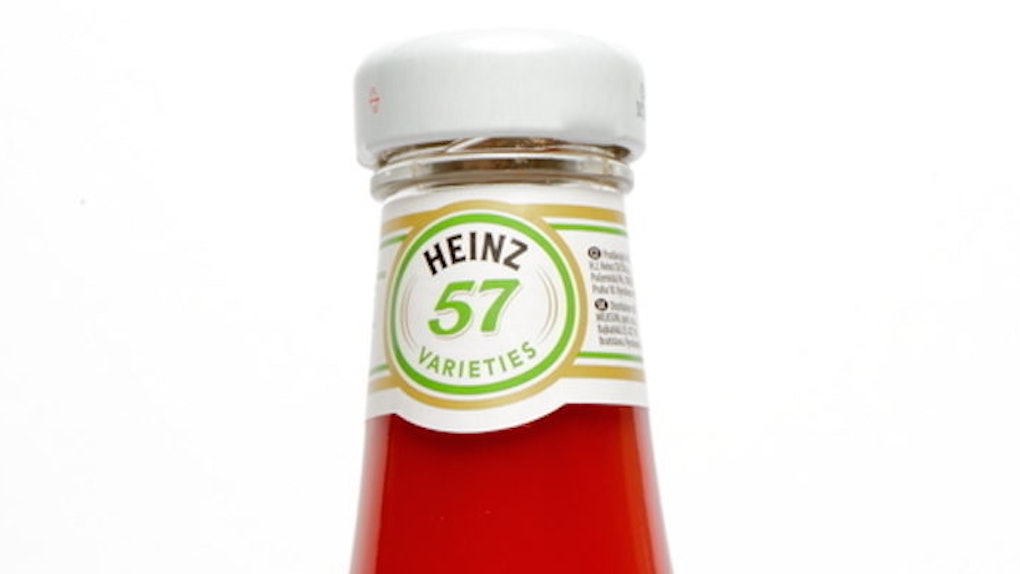 Heinz is like Kleenex or Band-Aids (Did you know that's just a company name? They're actually just called bandages), as its become ubiquitous with the product it holds.

What did you picture?

You pictured a Heinz ketchup bottle -- either the glass one which makes you fight to retrieve its contents or the plastic one which squirts out its insides with the eagerness and velocity of a teenage boy's first orgasm.

(Woah, I just legitimately creeped myself out big time.)

Anyway, what else do you picture?

Look closely at the image you're picturing in your mind and you'll see this:

I can see you thinking, "What the fuck does that number 57 mean?"

You'd probably guess "57 Varieties" is Heinz simply explaining how many varieties of ketchup it sells.

That guess would be wrong.

As Metro points out, they have close to 5,000 varieties on the market.

The real answer is a lot weirder and far more arbitrary.

The number originates from a train ride Henry Heinz, whom the company was named for, took in 1896.

While riding, he saw a sign advertising "21 styles of shows."

Basically, he just liked the sound of that and he decided to follow suit.

Heinz was making over 60 different varieties at the time, but he decided to plaster his bottles with "57 Varieties."

The advertising technique stuck, and the company is still doing it over 100 years later.

Go ahead and do what you want with that information.