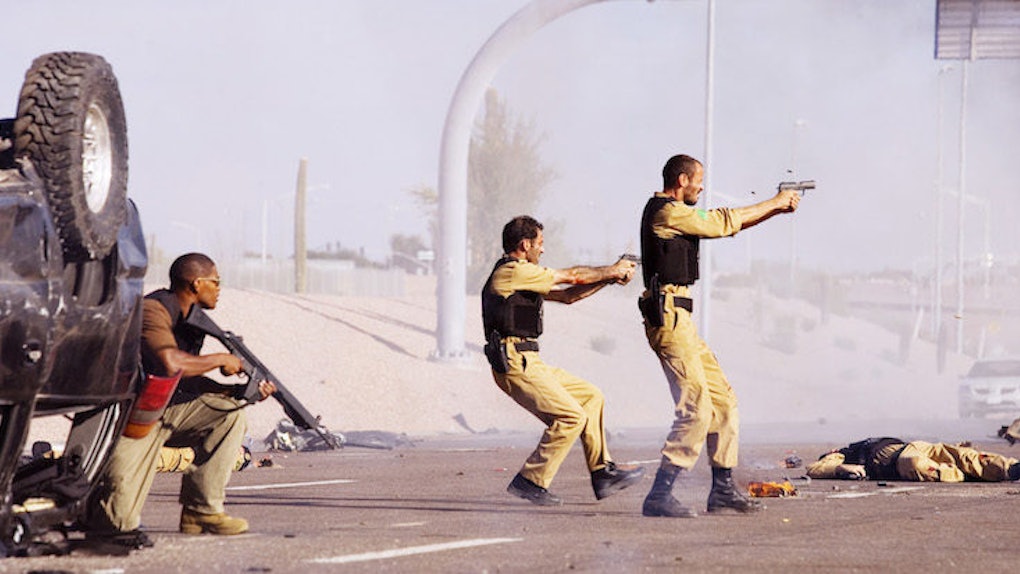 How Movies Throughout History Show The Evolution Of Terrorism

Although we generally view films as entertaining distractions, they’re also important reflections of their time.

Movies are a reaction to what’s going on in reality and, in many cases, a format by which we can attempt to understand reality. By looking at Hollywood war and action movies from different years, you can get a clue into what was going on in the American psyche.

We looked back at how American fears, perceived enemies and terrorism evolved over the years, as seen in movies.

During the decade following WWII, films were made about the people in the war. "From Here To Eternity," with its famous romantic beach scene, shows the attack on Pearl Harbor near its end.

The first movie made about the Korean War was "The Steel Helmet" in 1951, where American soldiers in North Korea fight against the country’s major mid-century threat: communism. Communism continues to come up as the enemy for decades to follow.

America’s other fear was nuclear war. "On the Beach," from 1959, deals with a post-nuclear war world where people in Australia are preparing to kill themselves to avoid radiation poisoning. Sounds cheery!

The threat of communism continued in the public’s view through the 1960s, as with 1962’s "The Manchurian Candidate."

The Vietnam War was dragging on and Americans’ opinions turned. As people protested against President Lyndon B. Johnson, John Wayne made a pro-war film, 1968’s "The Green Berets."

The 1960s also saw the start of "James Bond" movies, which do a fairly good job of laying out Western worries.

The first, "Dr. No," 1962, features an atomic reactor. The second, "From Russia With Love," 1963, includes Russians as the enemy -- which would go on to be a running theme in action movies for several decades.

The Vietnam War ended in 1975. Many American veterans returned with PTSD -- a term coined at the end of this decade -- and the public grappled to understand this war.

One of the most famous cinematic instances of this is 1979’s bizarre and brilliant "Apocalypse Now." While the movie is set in Vietnam, it focuses on the altered mindsets of American soldiers.

America faced a series of airplane hijackings in the 1970s, with many hijackers demanding money and to be let out at a certain destination. These real-life events swiftly filtered into film, like in the "Airport" series of disaster movies.

"Skyjacked," 1972, features a Vietnam vet hijacking a domestic flight and demanding to be taken to the Soviet Union as a military defector, successfully encapsulating each national fear of the decade.

There was a smattering of action flicks throughout the 80s featuring heroic fictional Americans winning out over real-life threats.

In 1984, "Red Dawn" (no, not the 2012 remake) was America’s fears realized as the Soviet Union attacked on American soil along with Cuban troops. The movie (spoiler) does not end in an entirely triumphant manner for the Wolverines, echoing the persistent threat in reality.

"Invasion U.S.A." with Chuck Norris imagines the city of Miami ravaged by attacks from Cuban troops led by a Soviet operative. These domestic, worst-case-scenario films show the height of fear across the country.

Chuck Norris was out to save the day again in "Delta Force," 1986. Here, we get the start of the rise of the Middle Eastern terrorist.

"Delta Force" was inspired by the real-life hijacking of a plane by Hezbollah. While in real life this was an extended hostage situation with the alleged perpetrators remaining at large into the 2000s, Chuck Norris victoriously kills the accented and keffiyeh-wearing hijackers.

Hollywood was also looking at terrorism by Americans in the States. "Mississippi Burning," based on a true story, was one of several films dealing with white supremacist terror enacted during and after the Civil Rights Movement.

Homegrown terrorism became more of a theme in the 1990s following the Unabomber attacks and 1995 Oklahoma City bombing, along with acts of violence from groups against animal testing, environmental destruction and abortion, among others.

The Soviet Union dissolved, ending the Cold War. But as the country had less to worry about from the USSR, al-Qaeda had been founded. "Navy SEALs," 1990, starring Charlie Sheen, was a military-glorifying film about terrorists from “Al Shudadah.”

"Executive Decision," 1996, was about an Islamist terrorist hijacking an American plane. In his review, Roger Ebert added this parenthetical:

(It would have been easy to make the terrorists members of a non-sectarian movement, and I wish they had; what purpose does it serve to slander a religion?)

"Executive Decision" was referred to this year as the start of “ludicrous portrayals of Islamic terrorists” by Jon Ronson in a GQ article about Muslim-American actors only being able to get work playing terrorists.

After 9/11, this image was, predictably, not much improved. In 2001, "24" premiered and became known for showing preposterous -- and largely illegal -- counterterrorism action.

The "24" producers, who went on to make "Homeland," recognized the show may have contributed to Islamophobia and illegal actions by American troops and worked to improve what they put on screen.

"The Kingdom," 2007, is about a terrorist attack in Riyadh, Saudi Arabia. Sharif Nashashibi wrote in The Guardian the movie was an example of a new trend in film:

There are two differences between the recent crop of such films and their older counterparts: they now employ real Arabs to perpetuate the old stereotypes, and they utilise a token Arab 'good guy' to make up for the fact that the rest of the Arab characters are bad.

While some movies were directly about terrorism, others spoke to the fears Americans had after the attacks. "Flightplan," 2005, used paranoia on planes to drive the plot.

In the last few years, we’ve been seeing movies about specific events, and the Americans involved in them. Of course, there was "Zero Dark Thirty" in 2012, which was about American officials and, some argued, was a justification for torture.

Last year, we had "American Sniper," which was denounced by the American-Arab Anti-Discrimination Committee for promoting Islamophobia.

Next year, we’ll see what "Transformers" director Michael Bay made out of the 2012 Benghazi attack on the American diplomatic compound.

But we’ve also seen a rise of superhero flicks like "The Avengers" and the new "Batman" series. Todd VanDerWerff at Vox argued superhero movies are our response to 9/11:

They began, as with America's actual reaction to 9/11, as films about vulnerable individuals finding the strength in themselves to overcome tragedy. Then they became stories about beings and organizations with nearly infinite power that would do whatever necessary to keep the homeland safe. And now, increasingly, they are grappling with the costs of the retribution they've doled out, and the security systems they've built.

We’re still in the midst of America’s actions in the Middle East, and movies are following that, whether directly or indirectly.

Movies can be, to some extent, a form of societal therapy, especially when they deal with ongoing issues. They’re also important markers of America’s general mindset -- and prevailing prejudices.

But when all of that gets too heavy, at least we have some movies that can still be a total escape from reality.