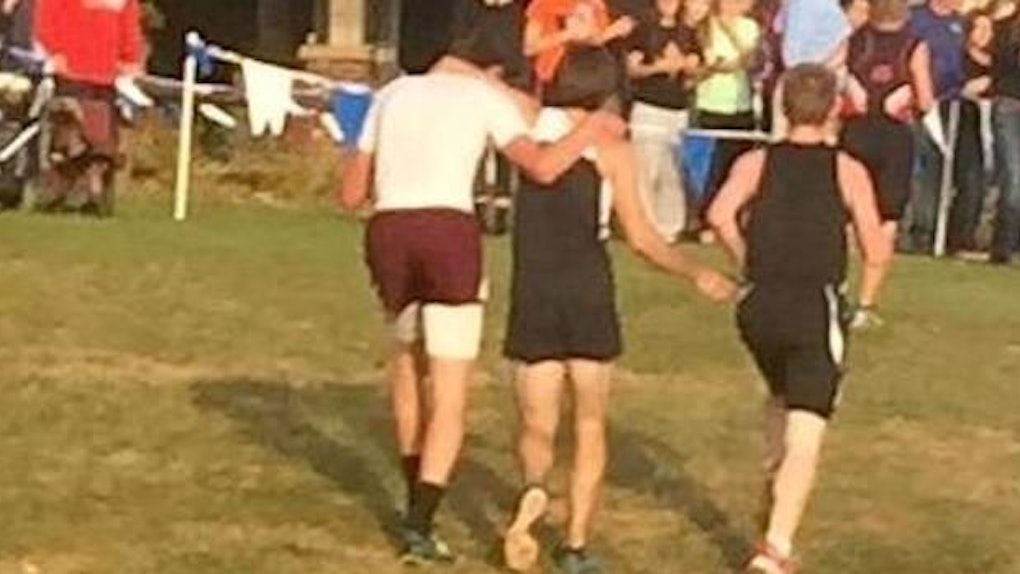 A high school cross country champion was stripped of his title for helping a rival finish the race.

But a few minutes after crossing the finish line, Hougland saw Mediapolis High School's Garret Hinson, also 17, collapse about 15 meters away from the end of the race.

Zach saw him and shouted at other runners, 'Is anyone going to help him?'

Nobody responded, so Hougland took Hinson's arm and put it around his neck to help him walk. At the very end, Hougland let go of his competitor so Hinson could finish by himself.

Hougland said it didn't cross his mind Hinson was a rival or he might be breaking a rule by providing assistance. He was, instead, thinking about how he would feel if he was in Hinson's place, and no one came forward to help him.

Race officials, however, ruled Hougland's move worthy of disqualification and the revocation of his title.

NFHS [National Federation of State High School Association] rules do not allow a competitor to receive or give assistance from or to another competitor during a race. If a competitor receives or gives assistance, that competitor is disqualified from the event.

Hougland is still allowed to compete in the state championship this weekend because his team qualified by finishing third overall, WHO-13 reports.

But Hinson, who said he was "amazed" at Hougland's sportsmanship and was also disqualified, strongly objects to the officials' decision.

When I first found out from his coach that he had been disqualified, I was more upset over that than I had been over how my own race had went. Cross-country is a sport that takes months of dedication and training. To take away someone's chances at a state run for helping out someone that was obviously struggling when it was too late to have really affected any results doesn't seem right.

The Mediapolis High School girls' cross country team will be competing in the state championship as well, but instead of their usual uniforms, they will reportedly be wearing shirts they made with Davis County colors to honor Hougland.

Among the first people to thank Hougland for his sportsmanship was Hinson's mother. Hougland said she called him "her hero."