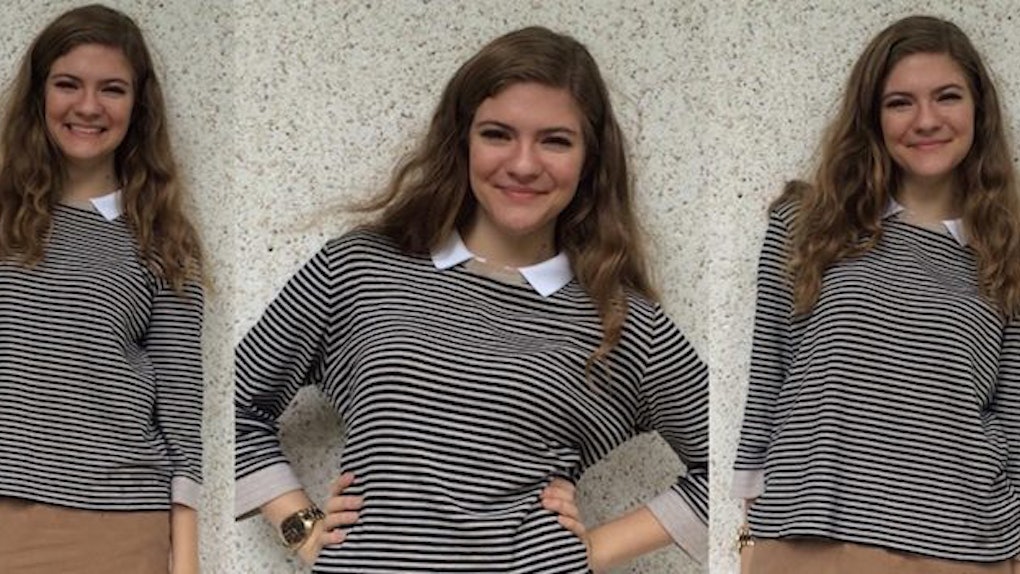 This Student Body President's Skirt Got Her Suspended From School (Photo)

These days, dress code debates are as American as naming your gun and throwing it birthday parties.

After being publicly reprimanded and sentenced to an in-school suspension due to allegedly violating the dress code, Beaufort High School student Carey Burgess retaliated in a post shared to Instagram and Facebook.

The post featured a photo of Burgess in the offending outfit and several paragraphs detailing her experience.

About 20 minutes into the day, my friend and I were excused from class to venture to the vending machine because our teacher was planning to do nothing all class period, as usual. On our way back, I learned something very important about myself: I am a whore. As I was walking down the hallway, I heard a voice behind me. 'Your skirt is too short. You need to go to in-school suspension and then go home.'

The student body president added the experience brought her to tears “in front of [her] friends and classmates because [teachers] do not have the decency to pull [her] aside and explain the problem.”

The post drew support from fellow students at the South Carolina high school and quickly spread beyond the walls of the school.

Burgess told The Beaufort Gazette her clothing was addressed in the past, once for her striped sweater and several other times for corduroy pants, skinny pants and navy sweaters.

The student insisted, however, her issue is with more than just the dress code and includes sexist comments and behavior from male students and staff.

Community support has been more than I ever imagined… I was shocked to find out how many girls at all Beaufort County schools feel oppressed and discriminated against in the classroom.

BHS Principal Corey Murphy suggested the success of Burgess' post is not due to its core message resonating with readers but, rather, the quality of the advanced student's writing.

She's a wonderful writer; she's a very gifted writer… That's what it was, you can feel the emotion in her words. Something like that, that's impressive.

It would surely be a testament to the quality of education at Beaufort if a student's post went viral, despite its message having no merit, due to the talent of the student penning the paragraphs.

Unfortunately, it's not likely this is the case, especially with BHS teachers “planning to do nothing all class period, as usual” as Burgess' post mentioned.

Murphy told the Gazette he plans to speak with the teacher who has the reportedly empty lesson plan and added it's normal for his own daughter and other students to say they didn't do anything at school.

As for Jennifer Woods, the administrator who publicly reprimanded Burgess for her outfit, Murphy said he supported the way she approached the issue. However, he added Burgess' outfit as it appeared in the photo she posted was entirely within the parameters of the BHS dress code.

Fellow Beaufort students, parents and students from other schools shared their frustrations over sexist inconsistencies in school dress codes via comments on Burgess' post.

How is my skirt so short to get sent home but guys can wear Chubbies and expose WAY more leg than me and still be in school.

When asked his position on the preppy, colorful men's shorts featuring tiny 5.5-inch inseams, Murphy pulled examples from online of both inappropriate and acceptable ways to wear Chubbies.

I won't vilify a garment. It's just the wear of it.

Whether or not this strategy brings up tricky issues with body size, type and image was not yet addressed by the administration.