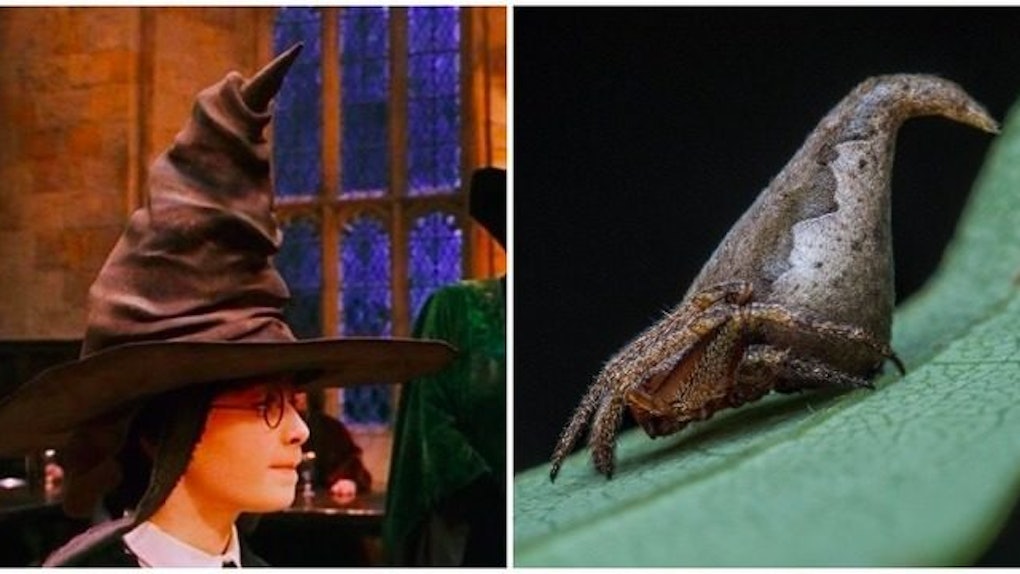 New spiders that look like the Sorting Hat were just named after the "Harry Potter" character. Because scientists have fun, too.

Or, well, that had been true until this very moment. I USED to not like spiders.

But, seeing as I like any and all things related to "Harry Potter" in any way, (JK Rowling could take a sh*t on a pile of old dog sh*t and I'd be like, 'That's better than "Divergent.”') I must now amend my stance.

Now, on face value, this spider looks like one of Satan's hemorrhoids — but once you realize it resembles the speaking, singing, personality-ordering magical wizard's hat that placed Harry Potter himself in Gryffindor, even though he would've been perfect for Slytherin as well (our CHOICES make us who we are), suddenly it looks adorable.

OK, adorable is too much. It's still a super-gross spider — and my enemy until the end of time.

But it's at least sort of friendly looking. Or something. I don't know. OK, I still hate it, but whatever, the name is so cute.

The spider, which was found in India by Javed Ahmed, Rajashree Kalap and Sumukha J. N., looks the way it does in order to mimic foliage, so that it can hide from predators.

In the Indian Journal of Arachnology, the scientist said the name was given to the spider in an "effort to draw attention to the fascinating, but oft overlooked world of invertebrates, and their secret lives."

And, honestly, it worked. I'm writing about it right now, after all.

And JK Rowling, who is a human being who can influence what organisms are named, apparently, loves it, too. It coincides pretty perfectly with the newest Harry Potter spin-off "Fantastic Beasts and Where To Find Them."

Scientists should follow these people's lead and just start naming everything they want to get attention after Harry Potter. New species of frogs, tree fungus, terminal illnesses. It'll be great.