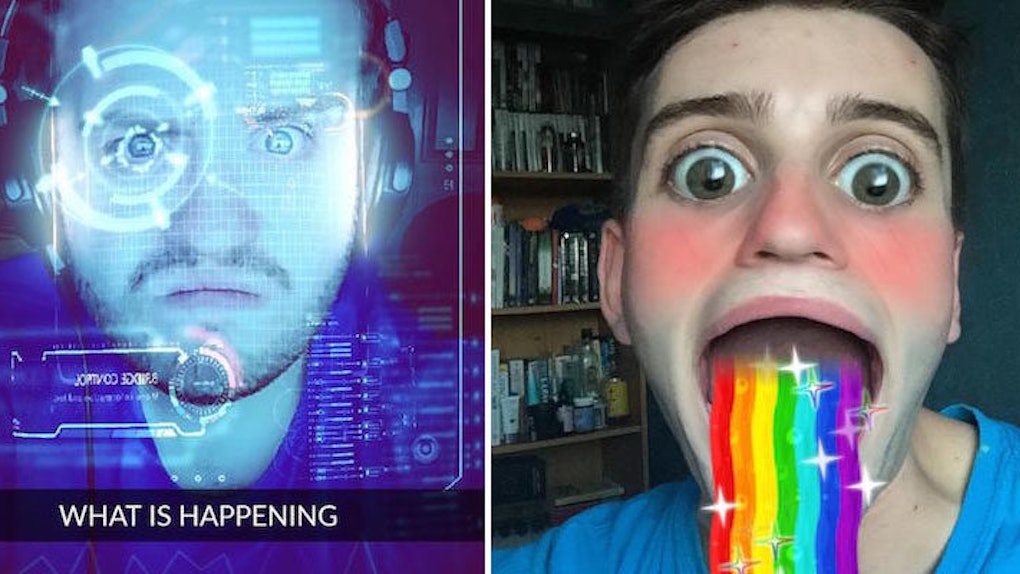 The New Snapchat Lets You Puke Rainbows, So Naturally Life Is Complete

Your Snapchat selfies are about to get a whole lot sillier, thanks to a new update released this morning.

In a blog post, reps for the social media app announced a new Lenses feature allowing users to add real-time effects to their photos and videos.

To activate the feature, hold your finger on the screen over your face. A menu will appear, enabling you to choose a slew of silly, interactive effects (my favorite makes it appear as if you're vomiting rainbows — Lady Gaga would be proud).

Two features designed to improve the user experience are also underway at Snapchat. The first, which is free, tags users' profiles with award badges indicating the users' levels of activity on the app. The feature, called Trophies, was created with the hope of making the platform function like a game; the more you use it, the more badges you'll unlock.

The second feature, available for a $0.99 fee, allows users to replay three snaps of their choosing -- but users still cannot use the feature to replay the same snap multiple times.

The Replay feature is an expansion on the app's previous one-replay-per-day policy, and it is Snapchat's first-ever public venture into in-app purchases. Though the company concedes the fee may be “a little pricey” for some users, it insists the feature is well worth it for the chance to rewatch a snap missed the first time around.

All three features roll out today, so head to the iTunes store to download the update.

Users can now add different effects to their photos.

tfw everyone with an iPhone gets the snapchat update and you're left out @thejessbess @TheCiscoKidder pic.twitter.com/we4T8NLEY7 — JAY [ham] KAY (@NurseMurderer) September 15, 2015

These effects include rainbow-vomit waterfalls...

This is the best snapchat update ever pic.twitter.com/kQWKUDf8Do — $tel (@mukeproblemss) September 15, 2015

...and download the update over at the iTunes Store.

Citations: The Way You Snapchat Will Never Be the Same Again (Cosmopolitan)