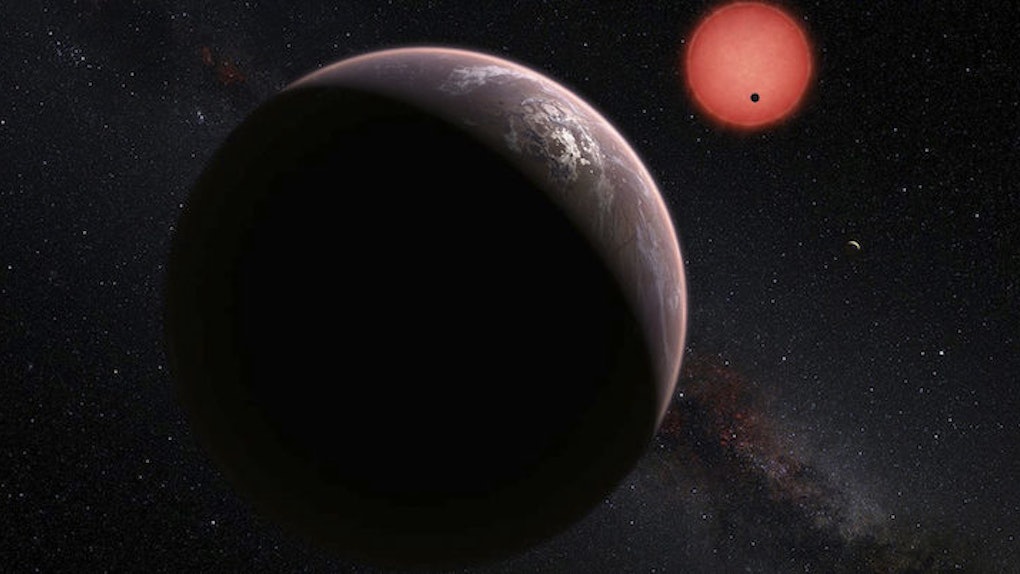 There Might Be Alien Life On These Three Newly Discovered Planets

Three new planets appear to be the universe's most likely locations for alien life.

The planets, all of which are about the size of the Earth, were located by a telescope in Chile called the Transiting Planets and Planetesimals Small Telescope, or TRAPPIST, according to Fox News.

Researchers from the University of Liège in Belgium reported on Monday the planets are the first to be found orbiting one particular dwarf star.

Located fewer than 40 light-years away, the dwarf star known as TRAPPIST-1 (after the telescope) is said to be roughly the size of Jupiter and is categorized as ultra-cool because it is much cooler and dimmer than the sun, making it more conducive to searching for life with respect to brighter stars.

The distances in which all the planets orbit their star suggest the planets are able to contain water in liquid form, a key ingredient for the existence of life, TIME reports.

Ultra-cool dwarf stars can also survive for billions of years due to their small size, providing plenty of time for intelligent life to emerge.

Out of the three planets, the most likely location for alien life is the planet called TRAPPIST-1d, which sits the furthest away from the TRAPPIST-1 star.

Unlike the other two planets, TRAPPIST-1d's temperatures might be perfect enough for liquid water to exist all over its surface.

Astronomer and lead study author Michaël Gillon of the University of Liège described TRAPPIST-1d's most probable landscapes to Mashable.

The landscape is reddish, as the star does not emit bluer light. You are on a ground made of rocks, or of ice. Or you are on a huge reddish ocean. Maybe there [are] big volcanoes in eruption in the background. Maybe there is some creature coming closer and closer to you. We can't say. Not yet.

The planets' temperatures and close proximity to TRAPPIST-1 were ascertained by the length of their orbits.

It takes the two planets closest to TRAPPIST-1 fewer than three days to complete their orbits compared to about 73 days for TRAPPIST-1d.

This means the planets are 20 to 100 times closer to TRAPPIST-1 than Earth is to the sun, though their temperatures apparently aren't that extreme.

It will be a long time before a spacecraft visits TRAPPIST-1, but other telescopes such as the Hubble Space Telescope will soon determine whether the planets emit methane, oxygen and carbon dioxide, making the planets more likely to sustain life.

Further vital details could also be revealed in 2018, when NASA launches the James Webb Space Telescope, the most powerful telescope in history.