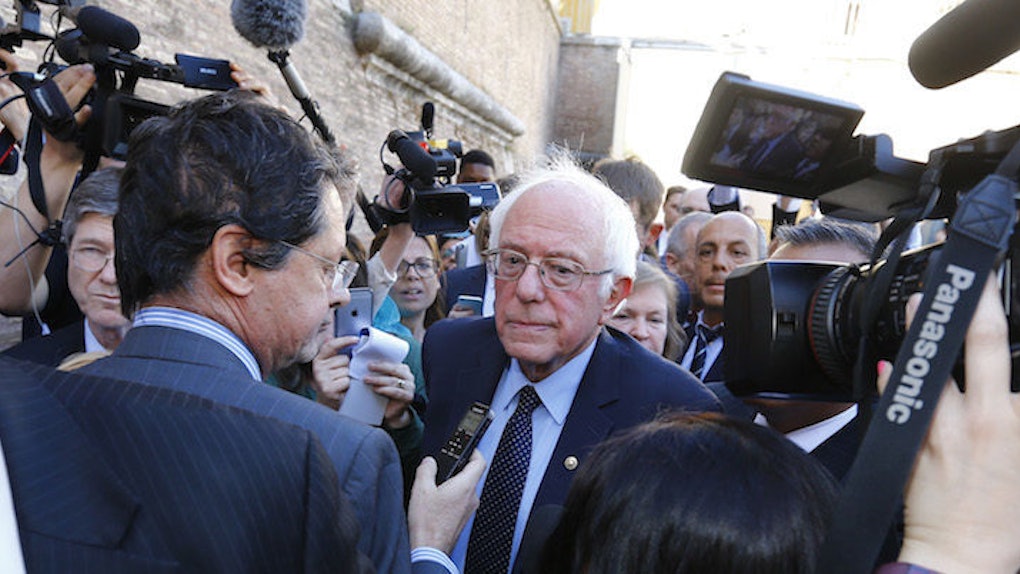 Cenk Uygur is a very busy man. When he's not hosting The Young Turks, a YouTube news outlet, you might find him getting arrested for protesting money in politics at the US Capitol.

I'm not kidding. On Monday, Uygur was among the largest number of individuals ever arrested at the Capitol as part of the Democracy Spring protests.

Fortunately, it did not prevent him from sitting down with me on Wednesday to discuss all of this, as well as Bernie Sanders' presidential campaign. I've never heard anyone talk about getting arrested so enthusiastically.

When I asked Uygur what the experience was like, he said,

[Democracy Spring] was amazing. To see all those people there, you feel the power. If you were among those protests, let alone among those who were arrested, there's not just great solidarity but a feeling of empowerment... That together we are bigger, we are stronger than those guys inside the building who've corrupted our system.

Uygur, who has offered some of the most refreshing commentary on the US presidential campaign thus far, is definitely not shy about challenging the status quo. So it's no surprise he was smack dab in the middle of the Democracy Spring protests.

The Young Turks host is really effective at getting people to think about the way the system is rigged across the board.

During our discussion, he made a particularly insightful point about why the media is afraid of a candidate like Bernie Sanders, who doesn't play by the rules. Uygur stated,

The establishment media has completely and utterly been unfair to Bernie Sanders. It's not a conspiracy; they didn't all get into a room and shake on it. It is the nature of who they are. If you have a corporate executive making the decision on who is going to run a station or a network, and then that person makes the decision on which anchors to hire… Well, they're all going to want like-minded people and people who are not going to rock the boat. So if you're already in great shape, and you're a multi-billion dollar company and you're part of an oligopoly, the last thing you want is someone to rock the boat... The corporate media is the system, they are part of this power establishment that has been corrupted and is keeping democracy away from the American people. That's why if you have someone saying a message you don't like on air, they're gone. The people who remain on air are those who are most compliant, the most willing to toe the line and make sure there is no change whatsoever.

Uygur noted the mainstream media has made a consistent effort to ignore reality, particularly when it comes to the sentiments and perspectives of young voters. He said,

It's interesting how the establishment media turns the truth on its head. Young voters are the ones who are going to be the next generation of your party. So, should you be happy that they are enthusiastic about one of your candidates? You should be thrilled. You should be leaning toward the person who is exciting the next generation of voters. Yet, both the Democratic party and the establishment media say that's a bad thing. They say, 'Oh, Millennials don't know what they're talking about, that's why they're supporting Bernie Sanders.' But, wait a minute, Millennials get their news from the Internet where you can dive in so much deeper and you get so much more of the policy than you get from the very broad discussions on TV.

He makes a good point, and it really makes you think.

Simply put, the mainstream media is a part of the corrupt system Bernie Sanders is campaigning against, which helps explain why a lot of coverage has been skewed against him. It also helps explain why major media outlets are quick to dismiss young voters as uninformed and naive, given they've come out to support Sanders in droves.

To borrow from remarks Bernie Sanders made in a recent interview with The Young Turks (conducted by Uygur),

The media is an arm of the ruling class of this country.

Prior to our conversation, Uygur interviewed Jane Sanders, wife of Bernie Sanders, discussing how she would be as First Lady, among other topics. Watch the interview below.

Uygur followed up this conversation with a panel discussion featuring Rosario Dawson, Linda Sarsour and Nomiki Konst, discussing Bernie Sanders' candidacy and the current state of American politics. Check out the full segment below.