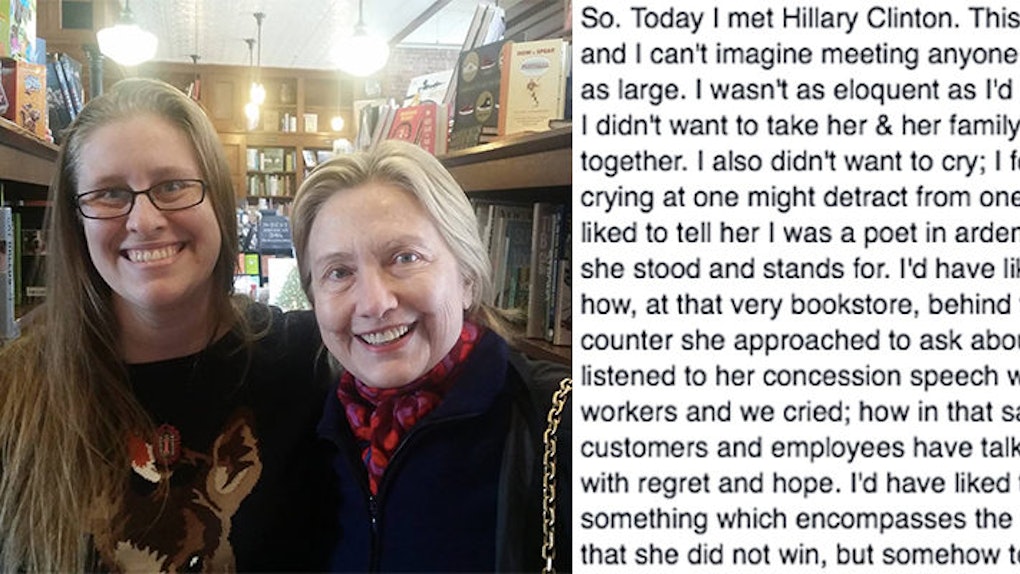 She says she held back tears after meeting Hillary Clinton over the weekend.

Despite being excited, she says she wasn't as "eloquent" as she'd like to be, and decided to give Hillary, Bill and their family their space.

"I thanked her, apologizing if I was being inappropriate or intrusive, because again: privacy. We all deserve privacy," she wrote.

"She" is Hillary Clinton supporter Jessica Wick, an employee at The Savoy Bookstore in Rhode Island where the Clinton's visited on Sunday, November 20.

In a Facebook post written on Monday, November 21, Wick detailed what it was like to see Clinton — and said what she really wanted to tell the former presidential nominee.

I'd have liked to tell her I was a poet in ardent support of what she stood and stands for. I'd have liked to tell her how, at that very bookstore, behind the very same counter she approached to ask about a book, I listened to her concession speech with two of my co-workers and we cried; how in that same spot customers and employees have talked about her with regret and hope.

It isn't exactly a surprise that Clinton was spotted at a bookstore, either.

Just last week, the former First Lady said that there were times she wanted to "curl up with a good book" and never leave the house following her Election Day disappointment.

Despite that disappointment, though, Wick says she's still proud of her candidate. Wick said,

I told her I voted for her, that she meant and means a lot. I thanked her, apologizing if I was being inappropriate or intrusive, because again: privacy. We all deserve privacy. She was gracious and she was warm and she said the bookstore was beautiful. Bill Clinton shook my hand and complimented my sweater.

Before Wick met Secretary Clinton, the politician had only been spotted by a passerby once before since Election Day. On that occasion, a mom and a young daughter got to meet Clinton while hiking, and now Wick had the pleasure of doing the same.

They were kind. We were unprepared to meet them. I wish they were the First Family Elect, but that wish is only new by about November 9th. I wish them a good future, and loads of good books and interesting reading. This was definitely one of the coolest things to have happened to me.

Secretary Clinton has no scheduled appearances on her calendar for the upcoming months.