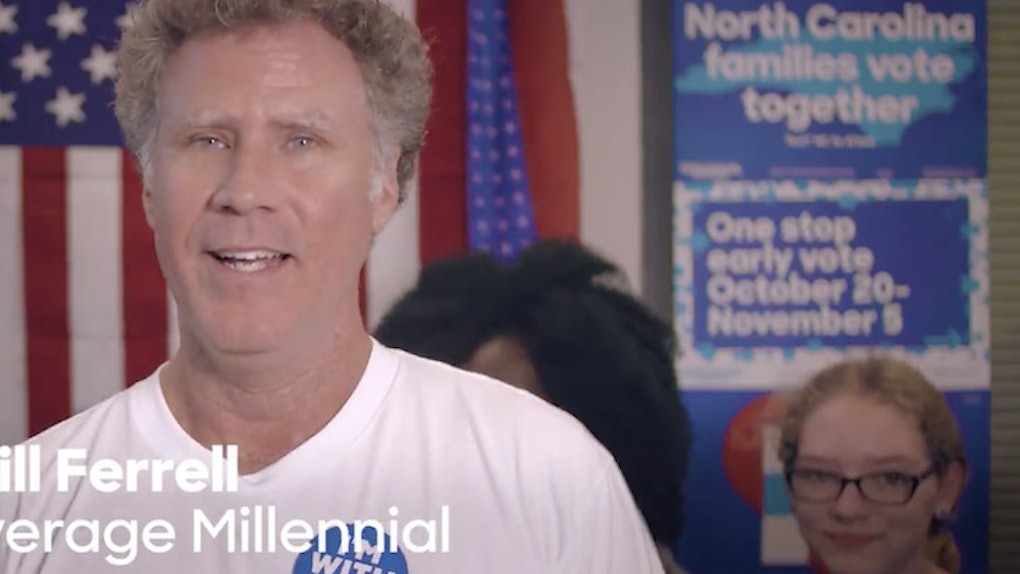 Will Ferrell Is A Basic Millennial In New Hillary Clinton Ad

If you need more convincing on why you should vote for Hillary Clinton, Will Ferrell is sure to get the job done.

Sure, you probably weren't expecting me to finish that opening line with Will Ferrell's name but it's fucking true!

In a valiant effort to connect with the Millennials of America and urge them to vote for Hillary Clinton on November 8, the 49-year-old comedian and actor is reminding everybody that he himself is a Millennial, too.

Hillary Clinton took to Twitter to unleash a hilarious ad spot featuring the "Anchorman" actor. The hilarious video starts off with Will Ferrell engaging in general Millennial-like conversation with a group of actual Millennials.

Since we all know Will Ferrell isn't within the 18-34 age range, the "Saturday Night Live" legend does everything in his power to convince you that he is a Millennial and that you should vote for HRC ASAP.

How exactly does he do that? Well, how would YOU convince a group of young voters that you were just like them?! With hip slang of course! Ferrell begins his pep talk saying,

I just wanted to talk to you directly, one vibrant youth to another. So let's all put down our Snapchat, Tinder, Instagram, and other assorted app-based technologies for a minute so we can keep it 100.

I'm not too sure about you, but after hearing that sentence alone, I'm sold on Ferrell being a legitimate Millennial. But voting for Hillary Clinton? I'm going to need some more convincing (not really).

Our voting history is public record. That's right, bae. Whether we vote or not is available online for any of our fellow millennial friends to see. Or even worse, our parents. If you don't vote, everyone might find out that you're the opposite of on fleek or that you're basic. Or even worse, that you've got no chill. All this on top of what will be a serious case of FOMO.

The video ends with Ferrell asking the film crew if he's pronouncing "Tinder" and "bae" correctly. There's even more proof that he's just like us -- a true Millennial (NOT).

Check out the hilarious video below for a closer look.

Citations: Will Ferrell Pretends to Be a Millennial in Hilarious New Hillary Clinton Ad (Complex)