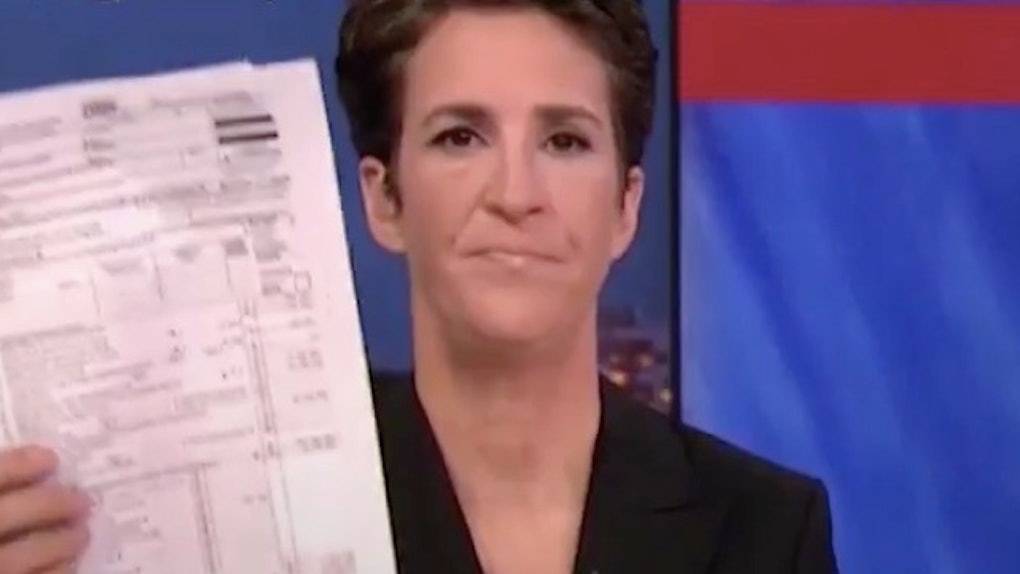 On Wednesday night, Rachel Maddow got a lot of people very excited when she tweeted she had President Donald Trump's tax returns.

Subsequently, a very interesting theory emerged regarding how they were actually obtained. Many now believe the White House released them.

During the US presidential campaign, Trump was consistently asked to release his tax returns.

As Maddow pointed out last night, he offered inadequate excuses for not doing so, and since becoming president, he has flat-out refused to release them.

People have wondered what Trump might have to hide by not releasing his tax returns, which is why Maddow's announcement generated so much attention.

There has been a lot of speculation about what might be revealed about Trump via his tax returns, especially in relation to his ties to Russia.

Ultimately, however, many were left disappointed by what Maddow reported.

In the end, nothing damning was revealed about Trump's taxes on "The Rachel Maddow Show."

From this, we learned that Trump paid $38 million in taxes and made over $150 million that year.

Long story short, we were reminded that he's really rich, and that we still don't have any solid evidence to prove he colluded with Russia to win the presidency, as some believe.

But, there is a very interesting theory about how Trump's returns got into Maddow's hands in the first place.

There's a theory Trump leaked the return on purpose.

The documents revealed on Maddow's show were given to tax expert and Trump biographer David Cay Johnston.

Johnston claims the documents were delivered to his home, and "pushed over the transom" at his house (a window above a door).

Johnston also believes the documents could've been sent to him by President Trump.

This theory gained momentum when people noticed a tiny detail on the tax documents: a stamp on the second page that reads "Client Copy."

In some ways, it makes sense that Trump would want this out there.

These documents disprove speculations emanating from a previous report from the New York Times, based on info from his 1995 income tax returns, that he may not have paid taxes for 18 years.

In other words, this gives Trump an opportunity to claim he pays millions in taxes every year, while also allowing him to reiterate the fact that he's exorbitantly wealthy.

There's also the fact that the White House released details of Trump's 2005 tax return even before Maddow's show.

This proves that Trump is more than capable of releasing his returns, in spite of past claims, and adds to the mystery of who gave the tax documents to Johnston.