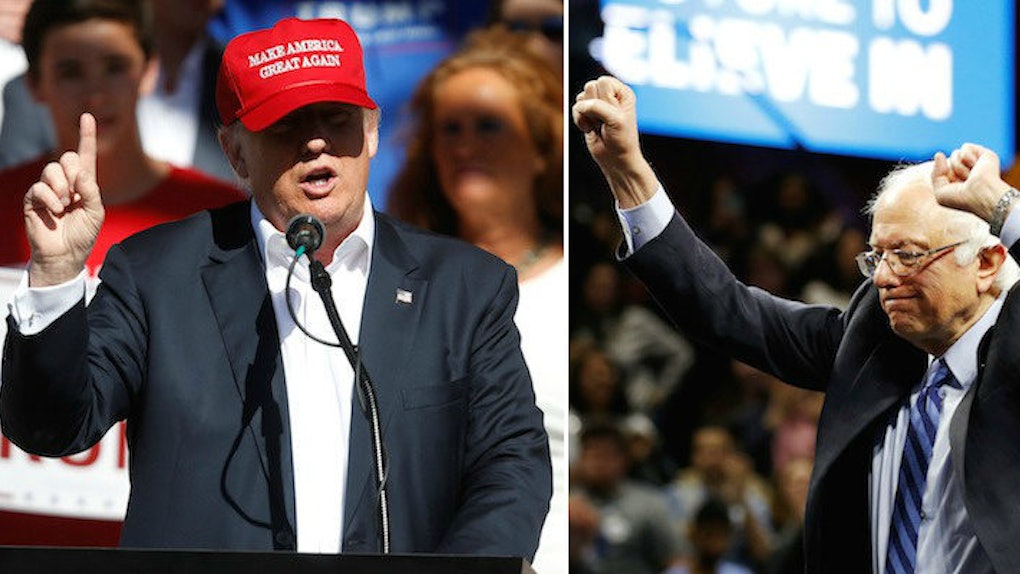 If You Want To Guarantee Trump Loses, You Better Be Voting For Bernie

Bernie Sanders might be significantly behind Hillary Clinton in terms of delegates, and she might be ahead of him by 12 points nationally, but a new poll suggests Bernie would fair much better against Donald Trump in a general election.

According to the NBC News/SurveyMonkey Weekly Election Tracking Poll, Sanders is favored over Trump by 13 points.

The poll, which involved 12,714 adults (including 11,089 registered voters) and was conducted between May 2 and May 8, showed Clinton would also defeat Trump, but only by 5 points (49 percent to 44 percent).

As MSNBC notes, the poll results are likely a product of the fact that Independents and younger voters (under 30), including those who identify as Republicans, are much more likely to support Sanders than Clinton.

Simply put, Sanders has a lot of appeal across partisan lines among Millennials. This is significant, since this generation makes up the largest voting demographic in the nation.

Correspondingly, a majority of Independents (52 percent) said they would vote for Sanders over Trump.

It's vital for candidates to appeal to undecided or unaffiliated voters, often referred to as "swing voters," if they hope to win in the general election. It seems Sanders is doing very well in this regard.

In other words, Clinton might be the Democratic frontrunner at the moment, but if you want to make sure Trump loses she may not be the best bet.

Sanders has a very tough road ahead if he has any hope of winning the Democratic nomination, but polls like this definitely have the potential to add momentum to his campaign.