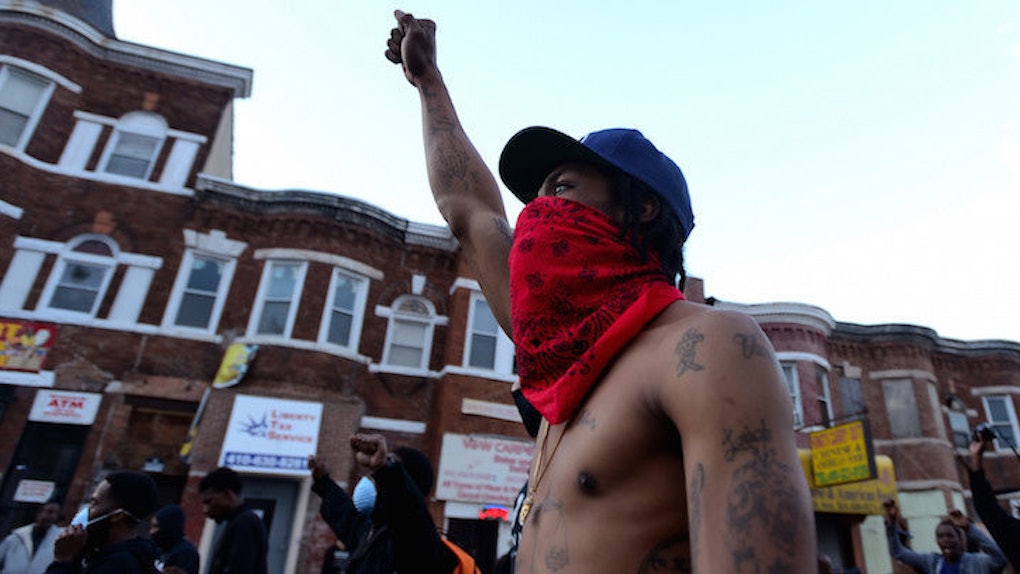 When You're Raised in Baltimore, Violent Protests Don't Surprise You

I grew up in Baltimore, albeit it in the suburbs, 15 minutes away from where the Freddie Gray riots began on Monday night.

I did not live the kind of life that many of the individuals who were looting and protesting in the city endured. I don't know their realities on a visceral level, and I can't fully relate to them.

I'll be the first to acknowledge they know much more about life in the less affluent sections of downtown Baltimore than I ever will.

We can only speak from our own experiences, and my experience may have been different.

But like them, I see Baltimore as home, and I want to see it fixed.

When I was still in high school, I worked in downtown Baltimore with troubled youth, tutoring them in English and math. I had the opportunity to witness firsthand the kinds of problems the city faced, even 15 years ago.

There was tremendous racial disparity between neighborhoods, a failing public education system and a mistrust toward police that seemed to reach an all-time high in my lifetime.

Martin O'Malley was mayor at the time, and his efforts to reduce crime in the city were simultaneously successful and heavily criticized.

His “crackdown” manifested itself in a zero-tolerance approach that led to tens of thousands of arrests for minor crimes, and fomented animosity toward police officers.

This was the Baltimore I knew, and when friends who watched David Simon's "Homicide: Life on the Street" and "The Wire" asked me if that was the city I lived in, I reluctantly said,

“Yes. I mean I lived in the suburbs, but I know that part of the city. It resembles the show.”

I never wanted to admit it, but recent events make it impossible to deny that a city known for its sparkling harbor, fresh seafood and beautiful baseball stadium is also a hotbed of racial turmoil -- and this is nothing new.

Most major cities across the United States experience racial divides, conflict with police and accusations of police brutality against minorities.

In 2012, Baltimore ranked sixth for highest murder rate in the country.

At one point between 2006 and 2007, it had a murder rate seven times the national average, and six times that of New York.

These statistics, and really even a simple drive through downtown Baltimore, solidify the conception that the Freddie Gray riots we've been discussing today were in many ways a long time coming.

It's possible to trace racial tensions in this city back even before the 20th century.

However, in 1911, one of the first racially restrictive zoning laws was put into place, and it was in Baltimore. This law prohibited individuals of one race from buying a home in a neighborhood dominated by a different race.

The law was struck down six years later, but area residents responded by signing covenants that barred blacks from their neighborhoods.

One of the areas where many of my childhood friends grew up, Roland Park, is still significantly white.

Not long after the 1911 zoning law was struck down, the Great Depression put redlining into practice, the effects of which have been felt even in the 2000s in court cases like The City of Baltimore versus Wells Fargo.

Redlining enabled real estate risk maps to be created. Within these maps, neighborhoods were color-coded.

Neighborhoods coded red were ones that banks were advised not to lend to. Most of these neighborhoods were populated by black residents.

This would prompt the white homeowners to leave, and real estate values would plummet, putting financial burdens on the black residents left behind.

Blockbusting also created racial divides that exist into today. In spite of a strong Civil Rights movement within Baltimore, Police Commissioner Anthony W. Batts pointed out in March of this year that, “Baltimore is still dealing with 1950s and 1960s-era racism.”

Under Secretary of State Wendy Sherman delivered a speech about Iran on April 27, but preceded it with recollections of this 1950s and '60s Baltimore that Batts speaks of.

She recalls going to Civil Rights marches as a child. She remembers her father trying to help black baseball player Frank Robinson find a home in an all-white neighborhood, and convincing homeowners not to flee.

Decades later, we see tensions manifest themselves in other ways. Baltimore has paid $5.7 million dollars in police brutality lawsuits between 2011 and 2014.

Mayors from Kurt L. Schmoke to the current Baltimore mayor, Stephanie Rawlings-Blake, have had to prioritize violent crime, drug violence and revitalizing neighborhoods to sustain the city.

An African-American real estate developer, P. David Bramble, made an observation about Baltimore that perfectly captures the city: “You go feast to famine in a matter of blocks, and it's very stark for people who are from out of town.”

The only thing Bramble gets wrong here is, the divide is stark to everyone. One childhood friend who lives in downtown Baltimore, Sarah*, 27, agrees that “there has been racial tension in the city for a long time,” and that it has now culminated in riots, looting and destruction on a scale we have not seen in Baltimore since 1968.

“It's incredibly sad, and it's been a problem for a long time, but that doesn't make it a valid excuse for destroying buildings that were supposed to provide housing for low-income elderly, or throwing rocks at police officers,” she is quick to add.

Sarah's sentiment is one that everyone from citizens of Baltimore, to police officers in the city, seem to share.

Keith Tiedemann, a 32-year veteran of the Baltimore Police Department who retired as a Major, states that,

“enough is enough. This is about protest and frustration, but it has also encompassed criminality. In 1968 [after Martin Luther King's assassination], protest burned the city down. When you turn violent, the protest element loses its power. The CVS that was destroyed this week was just a place where elderly people in the neighborhood got their prescriptions.”

Removing Race From The Equation

While some see the riots as a result of racial tension within Baltimore, others see it as a nationwide problem resulting from mistrust toward police.

“In every big city, this kind of reaction is not necessarily as much about racial tension as it is tension with police. People simply don't like having their freedoms taken away.”

While it is possible to remove race from the equation, in a city like Baltimore, it can be difficult.

Here, race just seems to be tied up in the matter.

Between 2006 and 2007, 52 percent of black males in their 20s in Baltimore were in prison or under some kind of correctional supervision.

According to a 2002 Maryland Drug Threat Assessment, the main distributors of heroin, one of the major drugs plaguing Baltimore and its police force, are African-American gangs.

In 2014, attacks on Latino students mandated a deployment of Baltimore City Police around area schools.

This stemmed from the shooting death of a 15-year-old Latino boy at the hands of a black man, which did not appear to be racially motivated, but was widely interpreted this way.

Baltimore City As A Pressure Cooker

The city's history of tenuous interaction between races, and with police, seems to have led up to this moment.

Every zero-tolerance policy had consequences; O'Malley's program was effective, and perhaps worthwhile, but it, nevertheless, perpetuated a problem.

Every redlined neighborhood, every racially-motivated real-estate practice, and every police brutality lawsuit in this city added fuel to the fire.

When Freddie Gray died, it may have just been the final, inciting incident—an excuse for decades of frustration to explode onto the city streets.

Unfortunately, this frustration has manifested itself in unproductive, self-sabotaging violence that may not come to an end until, according to Tiedemann, “there is nothing left to burn and nothing left to loot.”

All we can do now is learn from this experience.

We can take it as a reminder that every “crackdown” on violence has its consequences, which must in turn be managed; we can learn that every moment in a city's history informs its present and its future; we can see for ourselves that the message of a protest gets lost when the talking ends and the violence begins.

*Editor's Note: Name changed per the request of the interviewee