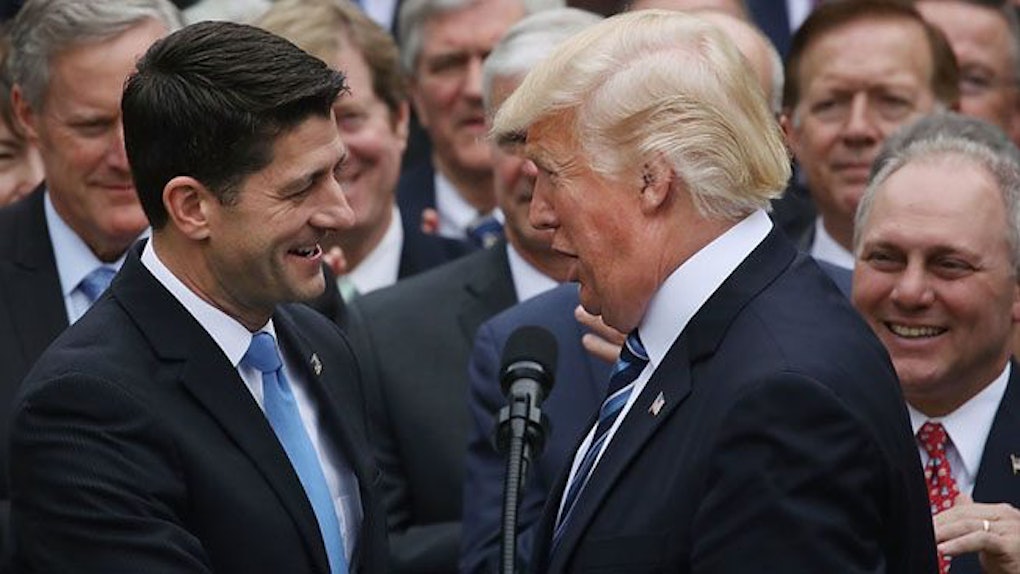 Twitter Reacts As GOP Celebrates AHCA At The Rose Garden

A viral photo taken at the White House has Twitter buzzing, and it's generated a wave of negative reactions from both liberals and conservatives.

The controversial scene comes from the White House Rose Garden, where Republican politicians met on Thursday afternoon following the American Health Care Act's (AHCA) passage through the House of Representatives.

It's clear why the sight of GOP representatives and the Trump administration celebrating generated so much conversation, too.

The most charged reactions came from those who were seemingly incensed by the idea that a group of leaders that is almost exclusively older white men are deciding the fate of a healthcare system that affects so many different types of people.

Another reaction focused on the optics as well, but with a focus on something different: the idea that the Republican party was trying to manufacture the image of victory.

Overall, the conversations surrounding the images from the Rose Garden on Thursday tells us so much of what we need to know about the healthcare debate going forward.

The points to look for are the following.

There's a long way to go.

There are huge, uncertain steps that need to be taken from here in order for Obamacare to actually be repealed. The bill, or a revised version of the bill, has to be agreed upon by 51 senators.

Until it actually makes it through the Senate, and completes a few steps after that, repeal will remain a long way away.

That's why people have likened the Rose Garden celebration to a way-too-early touchdown celebration.

The photo could end up looking pretty bad for Trump long term.

There's a case that Republicans met at the Rose Garden to create the image of unity between the members of its party.

However, if AHCA doesn't actually make it through the Senate, Thursday's White House Press conference could be remembered as this administration's "mission accomplished" moment.

That moment, of course, first occurred 14 years ago when George W. Bush declared essentially declared victory in Iraq aboard a Navy ship, only to have the war endure for over a decade.

And it could also be used as an attack against Republican candidates.

Republicans could easily argue that they were celebrating a victory for the American people and their voters, a number of which have genuinely been hurt rising costs prompted by Obamacare.

Still, Democrats could just as easily use the images from Thursday as material for campaign ads to help win seats during the 2018 midterm elections, especially if the AHCA passes and ends up doing more harm than good.

As for the critique about the make-up of the group at the Rose Garden: Yes, the GOP House caucus is majority white and male.

In other news, water is wet.