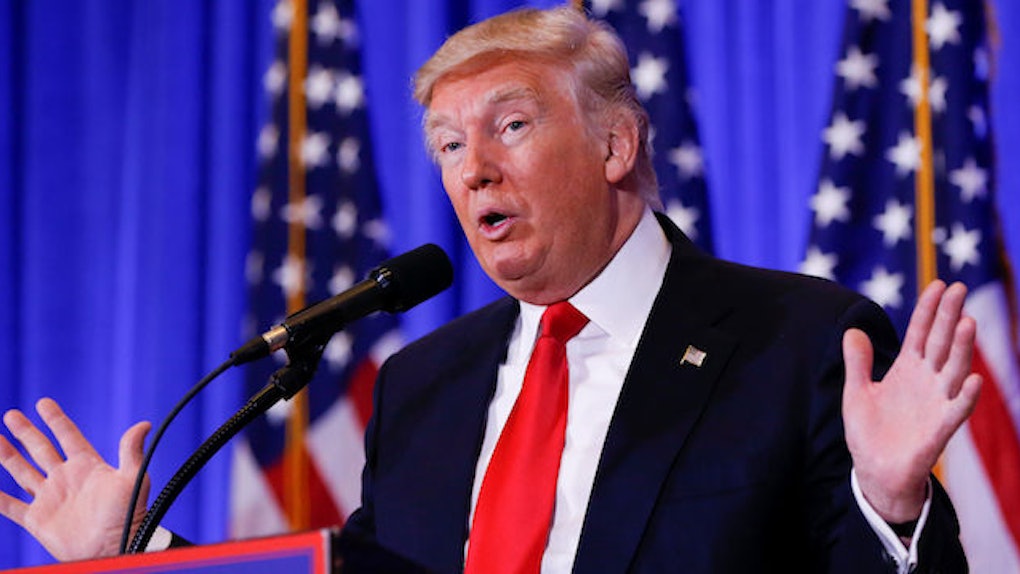 Trump's Pic Of Him 'Writing' Inauguration Speech Has Sharpie

Remember the New Yorker who'd promptly pop up on your television at around 8 o'clock on weeknights and utter the words "you're fired" so many times you began to think he invented the idiom?

Well, that guy is about to become the 45th president of the United States whether you like it or not.

That's right. On January 20, President-elect Donald Trump will officially take the oath of office along with Vice President-elect Mike Pence to serve as the leaders of the American people.

If you've been following American politics for the last two years, you're well aware of the fact many people don't believe Trump is fit to be president of our great nation.

Unfortunately for them, the 70-year-old reality TV star and real estate mogul came out on top against Hillary Clinton.

The last stop before taking the White House? The inauguration, of course!

As expected, the president-elect took to Twitter (where else?) to share a photo of himself writing his inaugural address. Hopefully, there's no locker room talk included.

Innocent enough, right? There was only one little problem. The internet had something to say regarding everything about his photo.

President-elect Donald Trump took to Twitter on January 18 to show off a photo of himself "writing" his inaugural address. He even nicknamed his Mar-A-Lago estate the "Winter White House."

Of course, the internet had plenty to say about his tweet. First and foremost, his facial expression is quite questionable. What the hell is going through his mind?!

Perhaps the most shocking discovery happened when someone realized Trump was using a writing utensil very similar to a Sharpie. They even called him out saying his notepad was likely blank.

Look, whether he's using a Sharpie or not, there are more jokes to be made here... Like, what's really on that sheet of mostly blank paper?! Here's an idea.

This also seems quite accurate (sadly).

But come on, the man's even said he's been writing his inaugural address for THREE WEEKS. There has to be more on that paper!

You know what? There's always a chance the paper is completely covered in Trump's most sincere thoughts.

Oh, come on! Did you seriously think you were going to get through a Trump-related article without seeing Putin's mug?