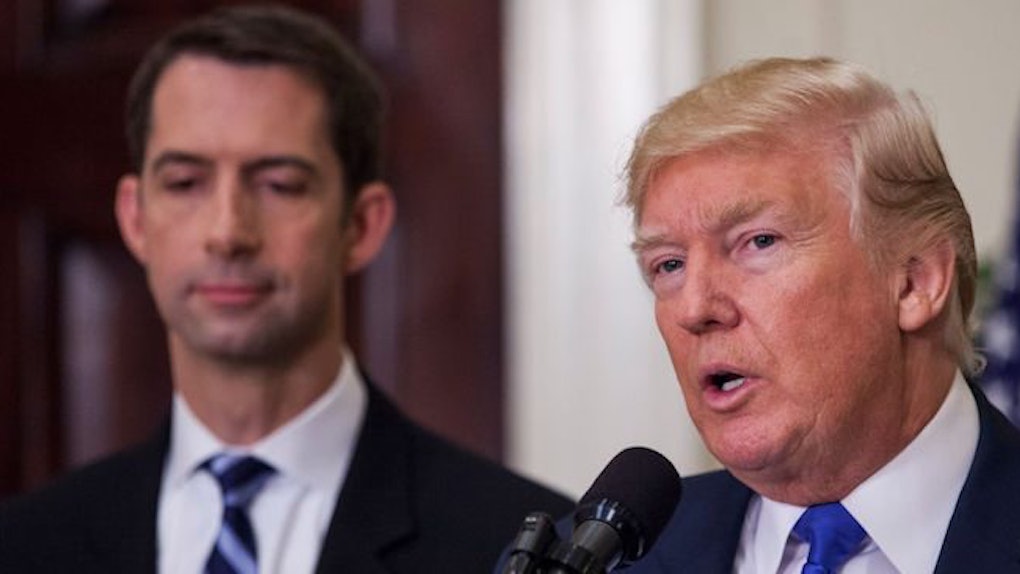 Donald Trump made tackling illegal immigration one of the centerpieces of his presidential campaign. Now, however, Trump is also going after legal immigration, embracing a controversial plan that has many people expressing their outrage on social media. On Wednesday, Aug. 2, the president endorsed a bill put forward by Republicans in the Senate that would represent a profound change to immigration policy in America. The bill would cut legal immigration by half in the United States, according to The Washington Post.

The bill, also known as the Reforming American Immigration for Strong Employment (RAISE) Act, was first introduced by Senators Tom Cotton and David Perdue in April.

Cotton and Perdue's bill would limit the number of green cards given to foreign nationals attempting to reunite with family in the United States, cap the number of refugees accepted at 50,000 per year, and eliminate the diversity visa lottery, which is a program that grants visas to countries with low rates of immigration to the United States, NPR reports.

Currently, roughly one million green cards are awarded per year, according to Migration Policy Institute. Apparently, Cotton, Perdue, and Trump feel this is far too many.

The bill would implement a new immigration system with a point-based structure for green card applicants based on factors such as English ability, education levels, and job skills, The Post reports.

Experts contend curbing legal immigration in such a major way could have a detrimental impact on the U.S. economy.

While announcing his support for the bill, Trump claimed the current immigration system is unfair to hard-working American families.

But economists claim this approach to immigration would be a "grave mistake," according to a survey conducted by The Washington Post in July. Bernard Baumohl, one of the 18 economists who participated in the survey, told The Post curbing legal immigration in such a drastic way "increases the risk of recession."

And a lot of people seem to see this as an inherent product of xenophobia.

Immigration has always been central to America's identity and history, but Trump, whose wife is an immigrant and whose grandparents were immigrants, seems determined to ignore this.