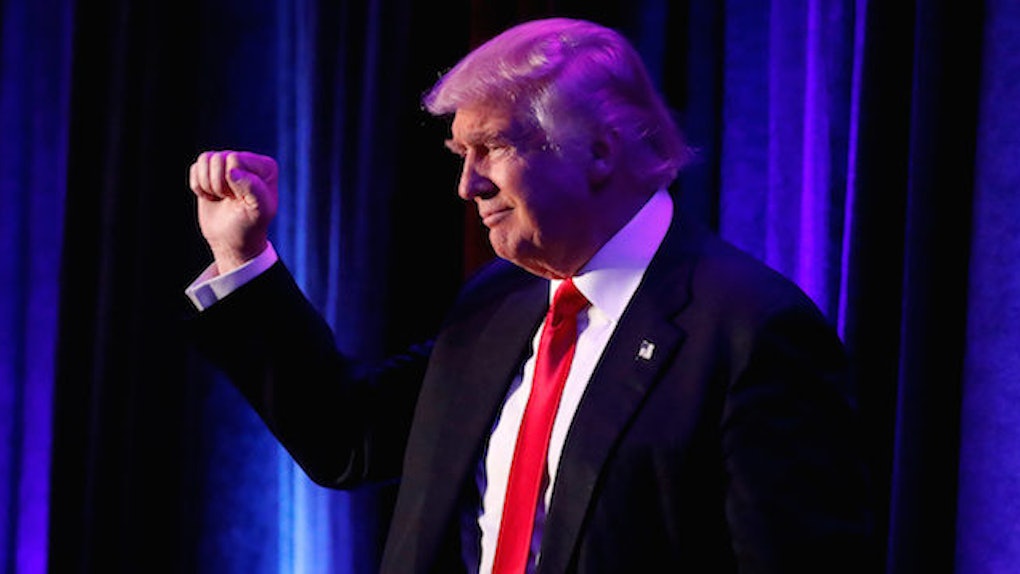 Trump Says Black Americans Didn't Vote Because They 'Liked Him'

He had a dinner that was supposed to be in honor of Vice President-Elect Mike Pence at the Trump International Hotel in DC, which totally doesn't feel like a conflict of business and political interests, so don't worry about it at all.

The New York Times described it as "a free-flowing speech," which is its way of saying, "What the hell did I just listen to."

As is fitting of his egotistic character, Trump took a dinner that was supposed to be about Pence and, instead, went on and on about himself and the people he deems losers.

He did take a moment to actually honor Pence, advocate against LGBTQ+ and women's rights, saying,

They all liked Mike. They were a little bit, you know, a little concerned with me.

At one point, Trump said he won, despite the "haters." But even the "haters" couldn't help but call his win "unprecedented." This was possibly in reference to a CNN book about the election called "Unprecedented."

We know he's read it based on an illuminating interview he had with Axios, where he was asked about what books he'd recommend reading. He responded, "CNN."

Ultimately, Trump could not think of a book he'd recommend. President Barack Obama would probably have a few ideas for him.

Back at the dinner on Wednesday night, Trump took a moment to thank the people he has decided to credit with his election victory.

At one point, he thanked black Americans who did not come out to vote on Election Day. He said they didn't vote "because they liked me, or they liked me enough that they just said, 'No reason.'"

Back in the factual world, black voters were not particularly big fans of Trump. Eighty-eight percent of black voters went for Hillary Clinton, while just 8 percent voted for Trump.

While it's true that's a slightly worse margin for Clinton than Obama had, it's more realistic to blame Trump's victory on the white Americans who voted for him.

But what is truth, anyway?