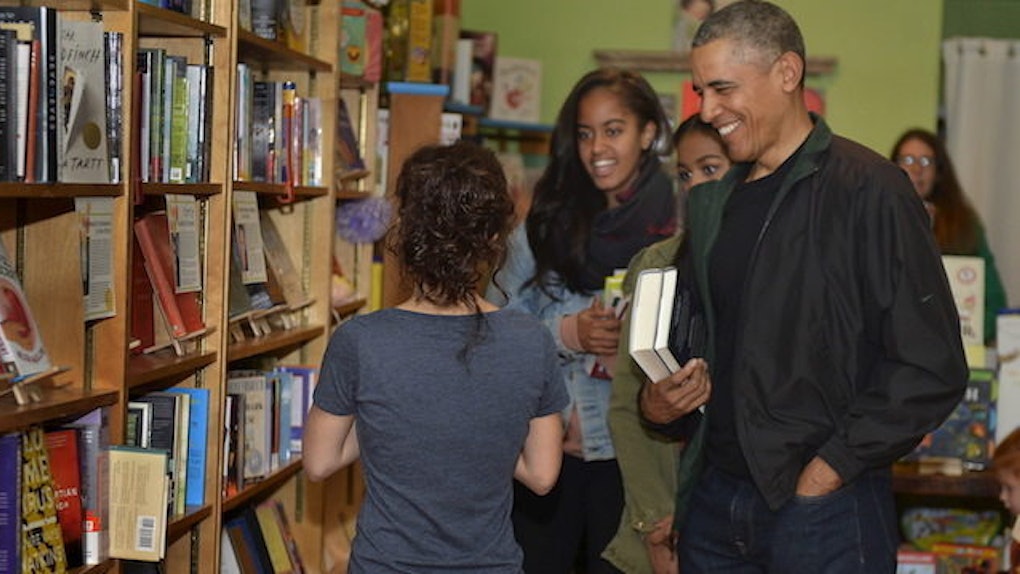 5 Books Barack Obama Loves That You Need To Read

Now that President Obama is stepping down, we're pretty certain he'll have time to join our book club.

Judging from his chat with The New York Times' Chief Book Critic Michiko Kakutani on January 13, he'd be an invaluable member.

Not since Lincoln has there been a president as fundamentally shaped — in his life, convictions and outlook on the world — by reading and writing as Barack Obama.

We're definitely willing to hear some of his recommendations.

So, without further ado, here are some titles Obama discussed with Kakutani and how they've played into his life.

"The Golden Notebook" by Doris Lessing

OK, Obama gets "Dad of the Year" for gifting Sasha with a fully-stocked Kindle. One of the books on the device? "The Golden Notebook."

In the story, Anna is a successful author who uses four notebooks to detail various aspects of her life: her African experience, politics, etc.

When she falls in love with an American writer and is threatened with insanity, she ties all those topics into one golden notebook.

Part of what was interesting was me pulling back books that I thought were really powerful, but that might not surface when she goes to college.

"The Three-Body Problem" by Liu Cixin

In this sci-fi go-to, a hush-hush military operation attempts to establish contact with aliens during the onset of the cultural revolution in China.

Every once in a while, we need to escape from reality and welcome a chance to explore other worlds.

The scope of it was immense. So that was fun to read, partly because my day-to-day problems with Congress seem fairly petty — not something to worry about. Aliens are about to invade!

The man's got jokes!

Anything written by Junot Díaz

However, as a fan and an English major who sat in lectures with Díaz, I can attest anyone — regardless of creed — will appreciate his work.

He's incredibly intelligent, raw... and will curse extensively at a Catholic college, if given the opportunity (Manhattan College Jaspers, raise your hand).

If you're not reading something by Díaz, you're doing literature all wrong.

"Fates and Furies” by Lauren Groff

Fates and Furies: A Novel, $7, Amazon

Groff's bestseller examines Lotto and Mathilde's relationship over a 20-plus-year span and how there are two sides to every relationship.

Obama thought it was a "very powerful read," and since it's on my shelf, I'm just going to go out on a limb and say we're book besties.

"The Underground Railroad" by Colson Whitehead

Though a heavy read, Whitehead's popular release details a scary part of our history we cannot ignore.

According to The Times' transcript, Obama claimed,

[It's a] reminder of the ways in which the pain of slavery transmits itself across generations, not just in overt ways, but how it changes minds and hearts.