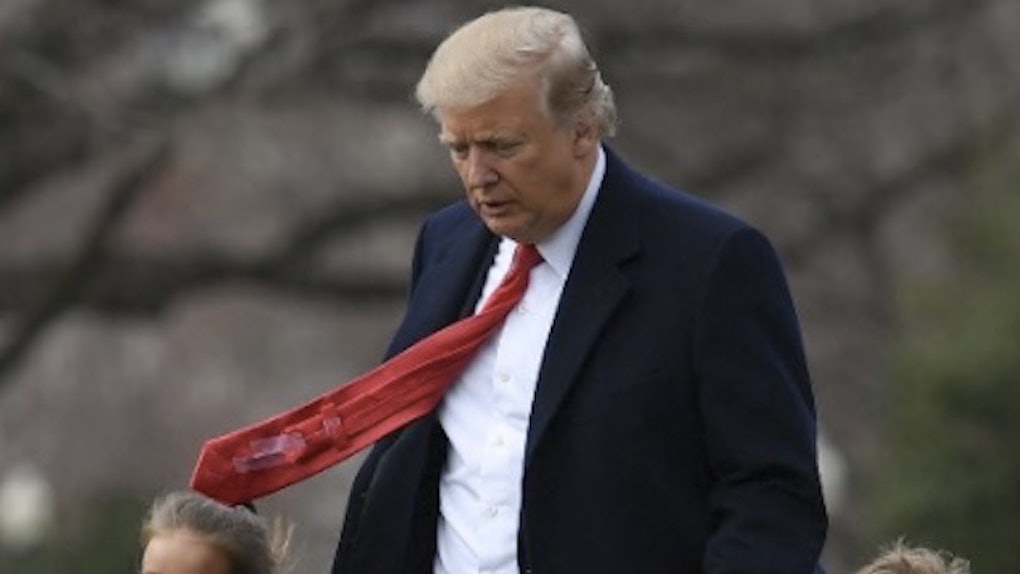 Trump Tapes His Tie Together, Which Is A Metaphor For His Presidency

He also loves to tape his ties together, rather than opt for a tie clip — and there's nothing surprising about his impractical move.

It is a metaphor for Trump's presidency.

It makes perfect sense Trump would do something like use scotch tape to hold his tie together.

You might think a man who makes his own ties would also be able to procure a tie clip.

Instead of buying one item that will permanently solve a problem, Trump would rather continue to expend another resource over and over, despite the fact it's not ideal.

But Donald Trump doesn't like to take the reasonable route in life. He is not an individual with patience for dealing with tiny details.

He just wants to get shit done, even if it's not very effective in the long run and everyone notices it's a little weird.

Trump loves quick fixes, even if there's another, more sensible option staring him in the face (a tie clip).

This is also reflected in his approach to policy and the presidency more generally.

Instead of actually addressing the massive inadequacies and inhumane nature of America's immigration system, Trump would like to build a wall — even though it will be extraordinarily costly and people can climb over or dig under such a wall.

Instead of looking at areas in the military where money is being wasted or not properly allocated, Trump wants to increase America's defense budget — which is already the largest in the world at roughly $600 billion — by another $54 billion.

Instead of consulting experts and thinking about the long-term consequences of acting on feelings instead of facts, Trump prefers to follow his instincts (or reports from Fox News and Breitbart).

Simply put, Trump is basically trying to hold this country together with scotch tape.

Sooner or later, he'll run out of tape, or it will just fall off.