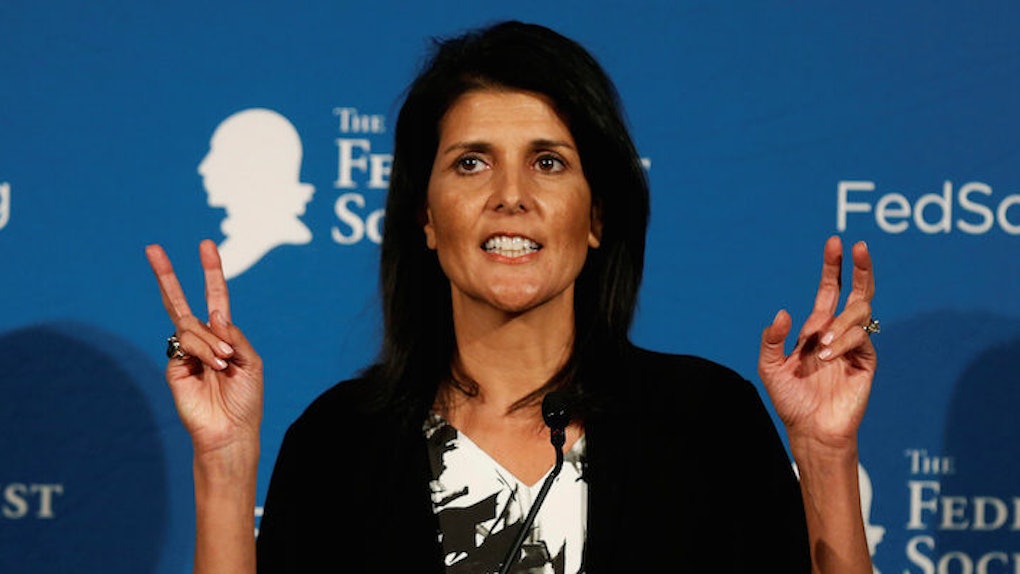 Trump Picks Nikki Haley To Be US Ambassador To UN

Donald Trump has picked South Carolina Governor Nikki Haley, who once called him "everything a governor doesn't want in a president," to be the US ambassador to the United Nations.

She will still need to be confirmed by the Senate for the post, but this is pretty big news.

Haley was very critical of Trump during his campaign, particularly regarding his proposal to ban Muslim immigration to the US, among other matters.

Even though Haley said she was "not a fan" of Trump, she still told people she'd vote for him in late October.

Trump is trying to turn enemies into allies.

Back in March, Trump lashed out at Haley on Twitter (as he typically does when people criticize him).

But it now looks like Trump is trying to make nice with some of the people he clashed with during the election cycle, or he is at least trying to convince people he's capable of compromising and working with his enemies.

Trump is also reportedly considering Mitt Romney for secretary of state. Romney, along with Haley, was one of his harshest critics during the election cycle.

Haley is the only woman and only person of color Trump has picked for his administration so far.

Haley, who is Indian-American, is the first woman and the first person of color Trump has selected for his administration.

But she has no international experience, and many feel she's not qualified for the position.

You might say this is Trump's attempt to show the world he's tolerant, given many consider him to be racist, misogynistic and xenophobic.

On the other hand, some seem to feel this is Trump's empty attempt to check off the diversity box.

He's sending a woman to represent the US in the international arena, while stacking his administration with white men to handle domestic affairs.

So, it's somewhat difficult to see this is as a big step forward.

Trump is not a fan of the United Nations.

Trump has been very critical of the UN as an institution, so it's understandable why some people feel appointing Haley was just symbolic and not a true sign of progress for the president-elect.

In a speech Trump delivered to the pro-Israel lobbying group AIPAC back in March, he said the UN is "not a friend" to the US,

It's worth noting the US was instrumental in the establishment of the UN, and has a huge amount of influence as one of the five permanent members of the UN Security Council.

The UN is certainly worthy of criticism, but it plays a vital role in foreign affairs.

Trump's vague but strongly-worded critique of the UN ignores these factors.

As we discuss Trump and the UN, we also can't forget the time he tweeted this:

It's certainly going to be an interesting world with Donald Trump as president.