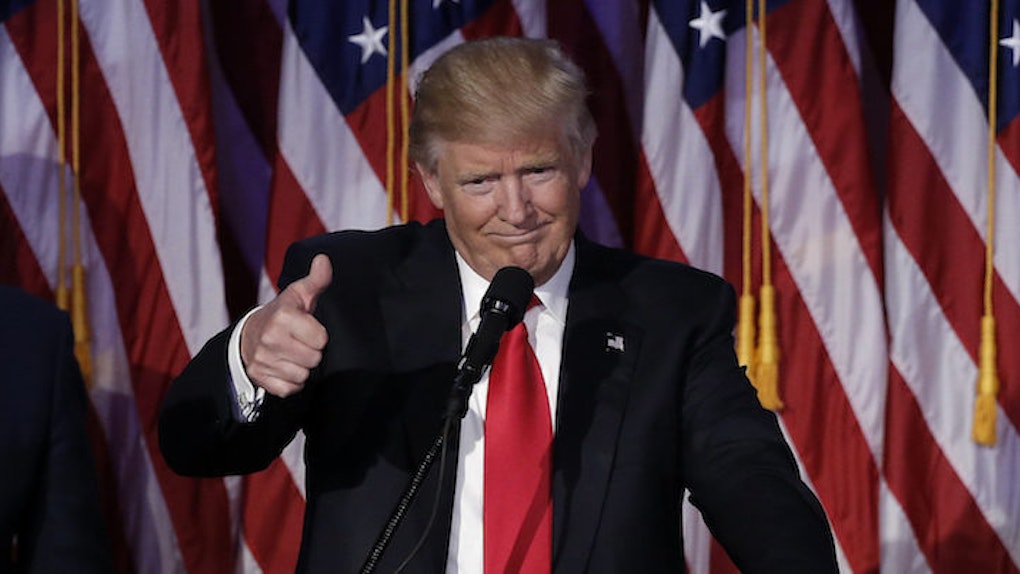 After Donald Trump was elected president of the United States, I expected him to go on some sort of Twitter rant saying things, like, "I told you so!" and "Crooked Hillary, blah blah blah."

Can you blame me? He's made a name for himself as a hot-headed, irrational Twitter user with a knack for degrading his enemies in 140 characters or less.

This morning, he proved me wrong, though -- and I'm not sure if I should become hopeful for our country or remain a sobbing, terrified mess.

President-elect Trump (I just cringed) tweeted for the first time as our elected president at 7:36 am on Wednesday, and the internet did not break.

He didn't bash Hillary Clinton. He didn't boast about winning and he certainly didn't insult anybody.

Such a beautiful and important evening! The forgotten man and woman will never be forgotten again. We will all come together as never before.

Um, is the Donald we know? Has he suddenly changed overnight?

Where are the insults? Where is the name calling? Am I dreaming?

This is the least "Trump" tweet ever, but it's also very him at the same time. Why? Because it tells us nothing, and it leaves us with questions.

Who are the forgotten men and woman he's talking about? Is he referring to us? Forgive me, but I'm still shocked.

Through this tweet, he basically labeled becoming the president of the United States "beautiful and important."

Honestly, I think a 5-year-old kid could have put more emotion into becoming the president than that, but I won't digress.

On the bright side, it's not threatening or hurtful, which is start. Hopefully Trump's days as a Twitter troll are over, but only time will tell.

If he takes to Twitter like the old times, we have no one to blame but ourselves.