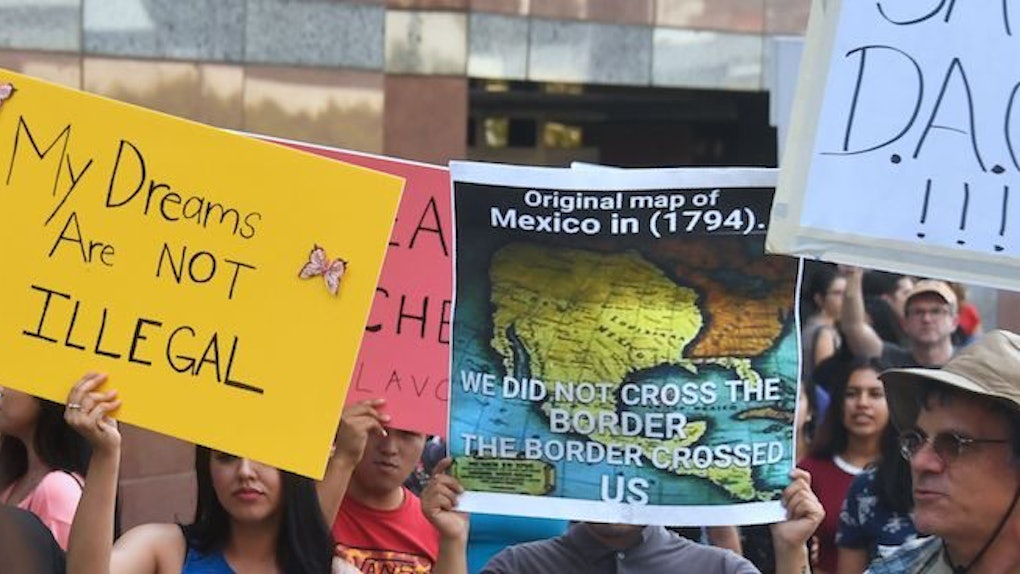 Is this actually a crisis averted? Congressional Democrats said on Sept 13 they have struck a deal to protect DACA, or Deferred Action for Childhood Arrivals, with President Donald Trump, according to the Associated Press. Democratic leaders Sen. Chuck Schumer and Rep. Nancy Pelosi announced late on Wednesday that they had hammered out an agreement with the president to protect thousands of undocumented young “Dreamers” who came to the United States as children.

In a joint statement, the Democrats said that the leaders had struck a bipartisan agreement to maintain DACA and beef up border security. The statement, announced following a White House dinner, read in part,

We agreed to enshrine the protections of DACA into law quickly, and to work out a package of border security, excluding the wall, that's acceptable to both sides.

The announcement follows President Trump's controversial announcement earlier this month that he would end the Obama-era DACA program, which protects young undocumented immigrants who arrived in the United States as children from the threat of deportation. The Trump administration announced on Sept. 5 that it would be ending the program with a six month delay, in the hopes that Congress would be able to work out a permanent solution in the meantime.

The announcement, of course, terrified the 800,000 or so young immigrants who were protected from deportation under the program, and were suddenly left unsure about their fate in the country they had been raised in.

A source briefed on the deal told the AP that the agreement specified bipartisan legislation called the DREAM Act, which would provide eventual citizenship for the childhood arrivals.

The other half of the deal is reportedly an agreement to work out a package on border security, but not Trump's much-touted border wall.

The proposed border wall with Mexico — which Trump often talked up on the presidential campaign trail — has been a thorny promise for the president. Though he promised during his campaign that Mexico would pay for the wall, following his election he has repeatedly pushed Congress to fund a wall, even threatening a government shutdown to get the needed budget. Now, a wall has been specifically left out of the deal, according to the statement from Schumer and Pelosi.

White House Press Secretary Sarah Huckabee Sanders said in a tweet that there had been no agreement to exclude the wall, however. "While DACA and border security were both discussed [at the meeting,] excluding the wall was certainly not agreed to," she wrote. The White House did not immediately respond to Elite Daily's request for comment.

This is the second bipartisan deal between Trump and Congressional Democrats in just a few weeks.

On Wednesday, Sept. 6, Trump bypassed his own party to clinch a deal with Democrats to raise the debt ceiling and fund more aid for Hurricane Harvey, which had just devastated Texas. The New York Times noted that the deal was a slap in the face to Republicans — Speaker of the House Paul Ryan had rejected the same deal earlier in the day.

Of course, a government shutdown is a big deal, but for many young immigrants, this probably feels a lot more pressing.

DACA, an executive order enacted under former President Barack Obama, allowed undocumented immigrants who had arrived in the United States before the age of 16, who had no significant criminal record, and who were in school or serving/had served in the armed forces, to apply for a temporary work permit and be protected from deportation for a period of two years, eligible for renewal. For many of these so called "Dreamers," what it meant  was simply security in the only country they had ever known.

So this will likely come as welcome news. Now, let's see how it plays out.