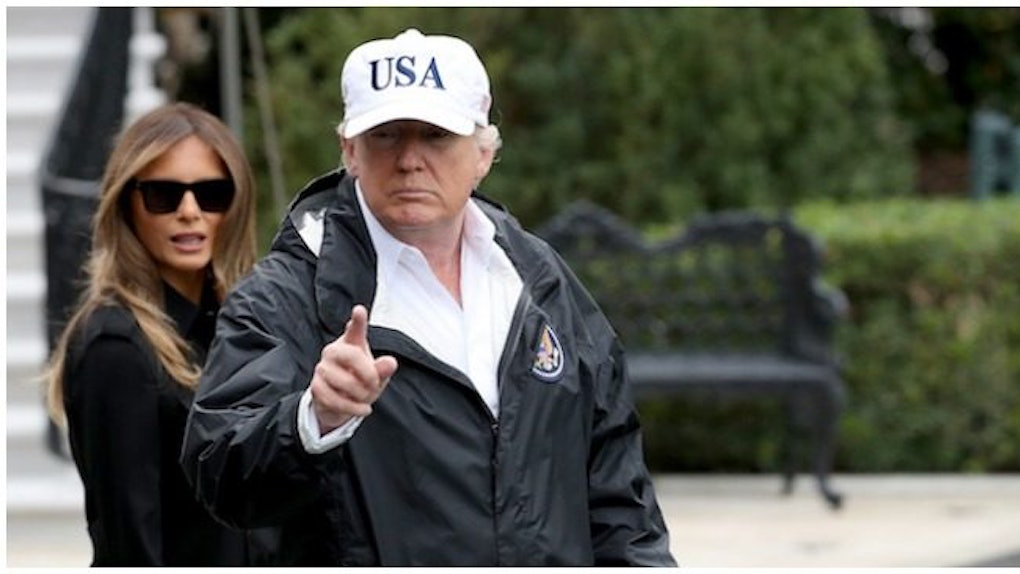 Where Was Obama During "The Last Hurricane?" Trump Wants To Know

Earlier on Thursday, Sept. 14, during a visit to Florida to survey damage from Hurricane Irma, President Donald Trump, First Lady Melania, and Vice President Mike Pence handed out food to victims. During the visit, Trump got chummy with one of the gentlemen in line. After exchanging a few words, he asked the man to share with the cameras what he had just said, so the man turned around and shouted, "Where was Obama on the last hurricane? He was playing golf."

This is not the first time we have heard that line, and it certainly won't be the last. But it's just not true.

It's possible that the unnamed gentleman was referring to October 2016's Hurricane Matthew, which hit the east coast of Florida and caused wind damage and some flooding before hitting North Carolina with the brunt of the damage, according to Weather.com. That said, Obama was not on vacation or golfing. In fact, he made several statements about the storm and freed up federal funding for recovery efforts by declaring disasters in several states, including Florida.

It could also be a referral to flooding in Louisiana in 2016, during which Obama was on vacation in Martha's Vineyard, much to the chagrin of conservative pundits and Louisiana residents. The Red Cross called the flooding the worst disaster since Superstorm Sandy, according to CNN, and critics were furious that Obama continued golfing.

But The Los Angeles Times reported that Obama's golf vacation wasn't exactly what it seemed: he reportedly received regular briefings, and he sent the Department of Homeland Security's Jeh Johnson down to Louisiana to survey the damage. Additionally, per CNN, he visited flood-ravaged areas of Louisiana on August 23 -- five days after a critical op-ed by a Louisiana newspaper demanded the president's presence.

But even that may not have been the storm to which the Trump supporter was referring.

He was most likely referring to the oft-cited demand to know where Obama had been during Hurricane Katrina, an odd refrain people were using in the wake of the devastation of Hurricane Harvey.

Thanks to the proliferation of virulently anti-Obama fake news, many people believe that Obama was off golfing during Hurricane Katrina, the storm that devastated New Orleans in 2005. That, however, isn't the case. Obama was, in fact, present in New Orleans, visiting victims and helping out.

And I will repeat this for viewers at home: Obama was not president until January 2009. He wasn't even really a nationally known public figure back in 2005.

And Bush was derided, at the time, for doing a fly-over while on vacation and not much else. The botched FEMA response to Katrina? Under Bush's watch. (That, however, hasn't stopped roughly 29 percent of Louisiana Republicans from blaming Obama for the federal government's disastrous response to the storm, per New Orleans' Times-Picayune.)

Meanwhile, Obama, while president, was on the ground in New Jersey and New York during the aftermath of the utter devastation of Superstorm Sandy.

So Trump's cutesy aside to the camera -- wink, wink, nudge, nudge -- is just another example of his incredibly disrespectful anti-Obama-at-any-cost stance.

As far as I see, there is no Trump belief system -- just an anti-Obama one. There are myriad examples of Trump trash-talking his predecessor for everything from the Iran Nuclear Deal -- which was determined by the P5 + 1, not just Obama -- to Obama's Cuba policy to the Paris Climate Accord, and much, much more.

Trump's dig at Obama's golf vacations is also highly hypocritical. In the 237 days Trump has been in office (as of Sept. 14), he has spent 75 days at one of his Trump-branded properties, according to The New York Times. The Trump Golf Count says that at least 55 of those days were spent at one of his golf resorts, with 24 golf outings confirmed by the White House. That's roughly 23 percent of his presidency spent at a golf resort. Obama, on the other hand, golfed 306 times total during his eight-year presidency. That is an average of a little more than 38 rounds per year, according to Golf Digest, a number Trump is on pace to blow out of the water.

That is to say nothing of Trump's own response to Harvey: he waited several days (much like Obama did after the Louisiana flooding) to make a first visit, and then, instead of surveying the damage, he discussed crowd turnout in Corpus Christi, Texas.

So, you know, stones, glass houses, and such.