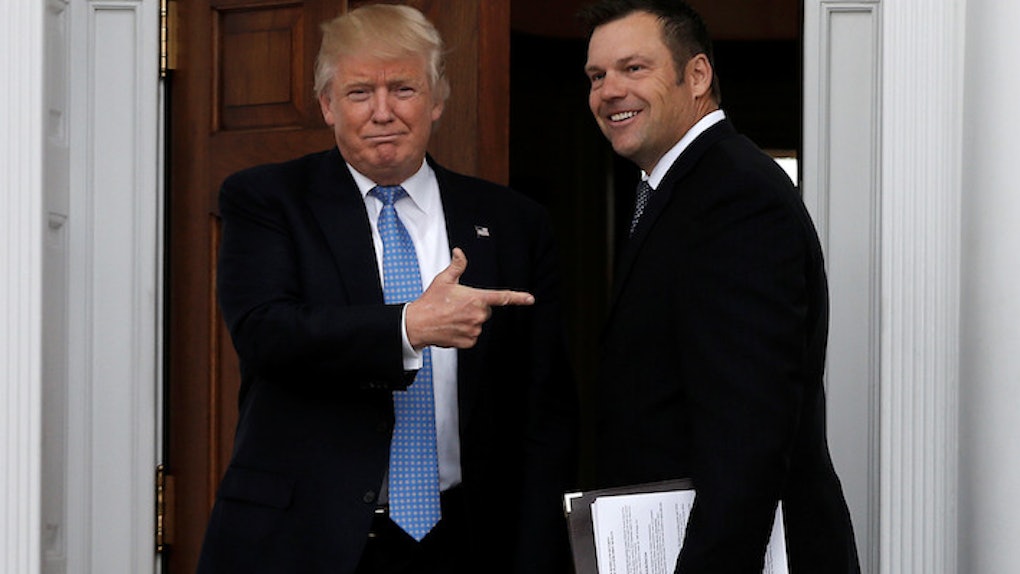 Kris Kobach is all anyone can talk about after the Kansas Secretary of State accidentally revealed some of his secret plans for America to the entire world.

Kobach met with President-elect Donald Trump at the Trump International Golf Club on November 21 to discuss his vision for our great country.

After a press photo of Kobach and Trump meeting hit the internet thanks to Twitter user @Southpaw, people noticed Kobach's secret documents were plainly visible.

All you really have to do is zoom in and there it is: a document titled "Department of Homeland Security Kobach Strategic Plan For First 365 Days."

Underneath the title lies several talking points, which include "terrorists," "criminal aliens" and "Syrian refugees" among others.

Thanks to the lack of a folder or a cover sheet, a portion of Kobach's plans for America are now known by many.

So, what exactly does Kobach's "secret" plan reveal?

The first point seems to hint at plans to "update" and "reintroduce" the Muslim registry system from the Bush era. It reads,

Update and introduce the NSEERS screening and tracking system (National Security Entry-Exit Registration System) that was in place from 2002 - 2005. All aliens from high-risk areas are tracked.

These particular plans resulted in mass deportations of Muslim immigrants back in the Bush era.

The next point calls for the "extreme vetting" process of all immigrants, but primarily focuses on Muslim immigrants in particular. The document continues,

Add extreme vetting for high-risk aliens, questioning them regarding their support for Sharia law, jihad, equality of men and women, and the United States Constitutions.

If you've followed along with Trump's past mentions of a "Muslim ban" throughout his entire presidential campaign, that will look pretty familiar to you.

The next line seems to hint at banning the entry of ALL Syrian refugees:

Reduce intake of Syria refugees to zero, using authority under the 1980 refugee act.

The current count of Syrian refugees around the world is an estimated 4.8 million people.

While a vast majority of them have been scattered throughout Syria itself, nearly a million refugees have requested protection grants and refugee status in Europe.

As a result, President Obama granted about 10,000 Syrian refugees asylum in the United States. However, according to Kobach's plans, he'd like to reduce that number to "zero."

Though partially illegible, the next point found within the "secret" documentation targets the deportation of immigrants who have committed "any crime" of any level. The document continues,

193,000 criminal removal cases dropped by the Obama Administration... guidance memoranda adopted by Obama Administration; its new guidance… criminal alien as any alien arrested for any crime, and any gang member... repatriate their citizens who have committed crimes in the Unites States.

Don't worry. Kobach also mentioned the infamous "wall" mentioned by Trump over the course of his campaign.

Again, the plans are partially illegible due to unintentional obstruction by Kobach's arm. The document says,

The last point observed in the revealing photo, which begins with the word "stop," seems to mention voter rolls. It reads,

According to Mashable, despite the fact that Kobach was ordered by a Kansas Judge earlier this year to put a stop to his "two-tiered voter registration system," which disabled nearly 18,000 eligible voters in Kansas, the Kansas Secretary of State seems to be hinting at a plan to disenfranchise eligible voters.

As of now, it is unclear if Kris Kobach will end up working closely with the Trump administration and if he will ultimately be chosen for a cabinet position.

However, it is quite obvious that he seems to be looking to strategize with Trump on the topic of immigration.

Overall, while it might be alarming to see such a drastic vision for our America typed out on a sheet of paper, these plans, from what we can see, do not seem to reveal anything we haven't heard Trump already refer to in the past.