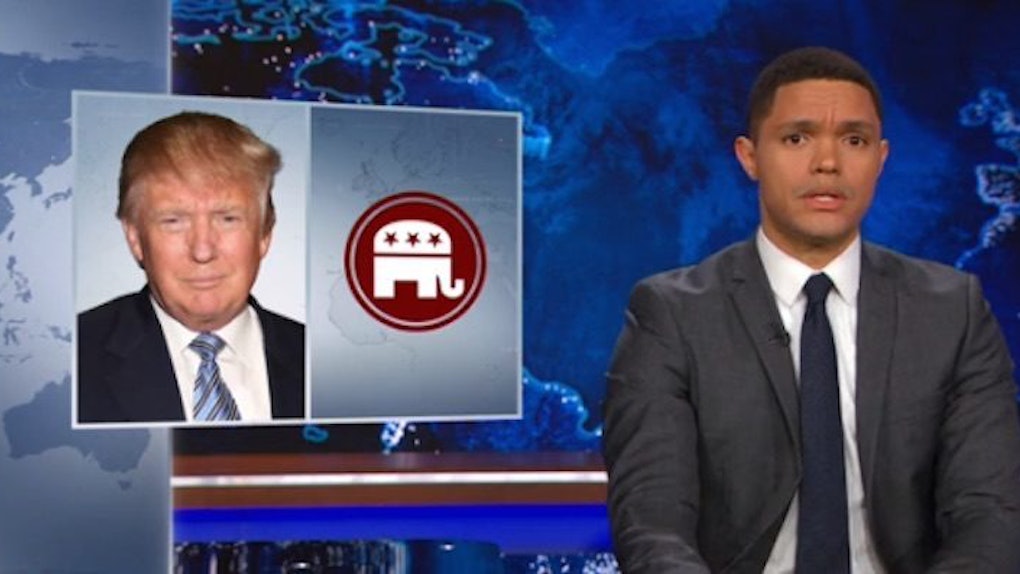 A lot of people have talked about moving to Canada, or literally anywhere outside America, if Donald Trump is elected president.

Trevor Noah has a message for these people: The entire world is full of abhorrent human beings who've somehow assumed positions of leadership. As Noah explains, this phenomenon of terrible leaders is not unique to the US.

Although America might have its own set of problems right now, don't forget a lot of those problems exist everywhere in the world. So, rather than try to flee, maybe you do need to make America great again, because it turns out, there's a lot of places like home.

The man has a point. If Trump actually is elected, running away from the US won't help change it for the better.

With that said, no one can blame you if you're feeling a little down about the country right now.

Somehow, a real estate mogul and former reality TV star with a penchant for bigotry and misogyny (and tiny hands) has actually become the presumptive Republican nominee for president.

This is indeed depressing, and it doesn't reflect very well on the US as a nation.

But, as Noah aptly highlighted on Wednesday evening, similar things are happening in countries worldwide.

Globalization, terrorism, high rates of immigration, and the increased integration of both people and economies, has fueled the rise of a number of Trump-like figures across the globe.

This is particularly evident in Holland with Geert Wilders, the Dutch Party for Freedom leader who is vehemently anti-Islam and has called for such things as banning the Koran.

Unsurprisingly, Wilders is a big fan of Trump (who called for banning Muslims from entering the US), and has even adopted the real estate mogul's campaign slogan, with a Dutch twist.

Noah also discussed Rodrigo Duterte, the recently elected president in the Philippines whose violent and misogynistic rhetoric are very reminiscent of Trump and his approach to both terrorism and women.

Unfortunately, no country is immune to certain levels of xenophobia and bigotry, among other horrendous sentiments and forms of oppression. The sad truth is much of this is inevitable as the world becomes more interconnected. Change can be difficult, and sometimes people respond to it in very ugly or extreme ways.

It might seem tempting to board a plane and fly away from your country's problems, but it doesn't necessarily solve anything. Not to mention, you'd probably just encounter another set of issues wherever you end up.

This all goes to show that the fight for tolerance and equality must be a global effort.

Watch the full segment of Noah explaining how there are Trumps all over the world above.