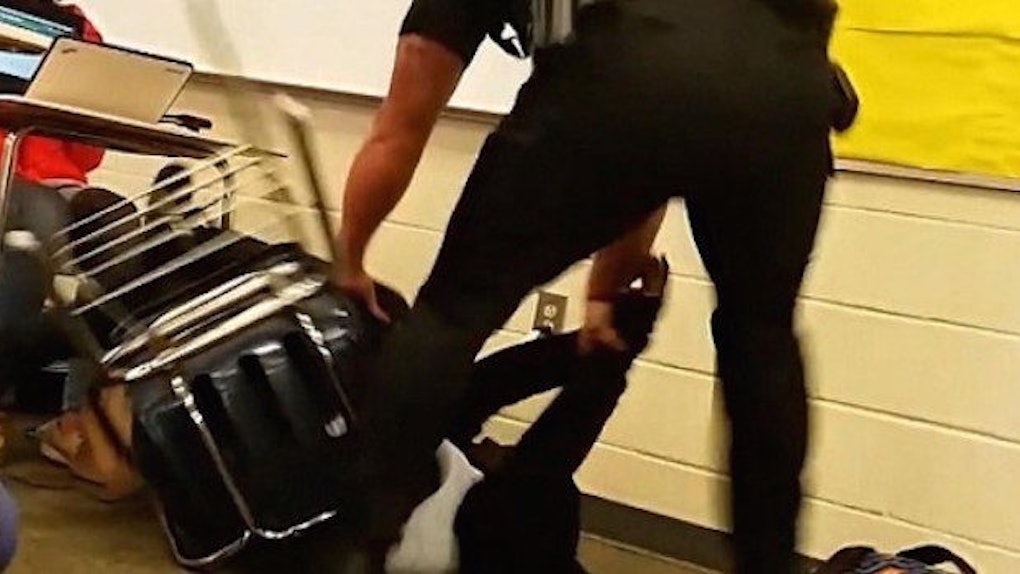 What Spring Valley Can Teach Us About Emotional Learning In Schools

I stopped by Spring Valley High School in Columbia, South Carolina last week, a few days after the horrifying incident in which a school resource officer picked up a student and dragged her across a classroom.

On the way there, my taxi driver talked to me about what should have happened in the classroom.

Rather than bring in the school cop, the driver said, a teacher or administrator should have stepped in and asked the girl why she was acting out in the first place.

We stopped our discussion to listen to what a radio host had to say about the Spring Valley incident. He compared it to Lamar Odom’s recent overdose, saying:

We have an athlete, a famous athlete, who lost his career and his relationship, and he acted out and cried out for help, and he ODed in a brothel. And he got our prayers, sympathy and a reality show. This little girl got choked and dragged. Whoever thought the first thing we could’ve done, rather than throw that little girl around that classroom, is, if you knew that was out of character for her, how come instead of doing all that, we didn’t go, ‘What’s wrong?’ That’s it. That’s humanity. And that’s being a grownup.

This was a theme in my discussions with Columbia residents about Spring Valley. Rather than questioning the officer’s actions -- which were, beyond debate, reprehensible -- people were questioning the proper way to treat a teenager who is acting out in the classroom.

The exact details of the Spring Valley High School assault are unknown, but it speaks to several broader issues, including racially-motivated actions, police brutality and the school-to-prison pipeline.

It also speaks to how mental wellness and emotional learning are handled in schools and the effects of education funding cuts.

According to Ken Zeichner, a professor at the University of Washington College of Education, the underlying problem is a “real lack of connection between teachers, students, schools, families and communities.”

Teachers and administrators need to interact with parents and families, Zeichner said, so their first conversation isn’t a call to say a student is doing something wrong.

There are several factors that contribute to losing the connection between schools and communities.

First, not all teaching programs emphasize connecting with communities.

Many teachers are also entering into communities they are not familiar with.

Non-university teaching programs sometimes send teachers into unfamiliar, high-need communities where it's possible they have more of a mentality of being the solution rather than working with the community to make improvements.

Moreover, funding cuts for education in many states in recent years have cut down on the amount of counselors and support staff in schools.

The national average ratio of students to guidance counselors was nearly 500 to one last year, according to the New York Times. The American School Counselor Association recommends a 250 to one ratio.

We need more counselors and social workers in schools, and not more police and metal detectors.

Through counseling rather than discipline, a student can learn how to handle whatever issues may be causing him or her to act out -- and this emotional knowledge can be used for the rest of his or her life.

Teachers should be aware of the students in the classrooms and be able to notice outlying actions. As Zeichner said:

You need to probe what’s going on in her life that’s causing her to act that way and step in and be supportive in a helpful way, rather than in a way that she’s already demonized as a problem.

There are limitless reasons for a student to act out, from life outside of school to mental health issues to direct interactions with teachers.

For instance, a teacher, like any person, may have class or racial biases, consciously or otherwise, which lead to classroom problems. This is another reason making connections with communities and students is so vital to having a productive learning environment.

Awareness ranges from a teacher noticing if certain students need extra help on a subject to if they’re acting in potentially destructive ways. In fact, one mass shooting prevention method relies on teachers’ attention to students.

And, of course, a teacher can’t be a therapist to every student -- that’s where the support staff, family and community comes in.

We’re looking for [an SRO] to be another dependable adult in the building who children can go to to be able to talk to, to work through situation, whatever that may be.

Canady explained South Carolina has its own training program for SROs, but national organization training advises officers not to get involved in classroom discipline issues. They should only intervene in criminal acts.

This is also somewhat blurred in South Carolina, where a controversial law exists that makes “disturbing schools” an illegal act.

We don’t know the specifics of the Spring Valley High School incident, except it’s quite clear the level of force used by the SRO was horrific and unnecessary.

But in thinking practically about how to prevent future similar incidents, we have to think about the myriad of systemic issues leading to that point.

This includes teacher training and the amount and direction of funds for education, as well as racial bias and the role of law enforcement officials in schools.

Overall, it includes providing genuine care for students and communities. Schools are supposed to be safe resources for young people to learn -- and we have to go beyond teaching math and lit.

As the radio host said:

Every time I turn around, somebody justifies the brutality of an adult for not asking the simple question: ‘What’s wrong?’