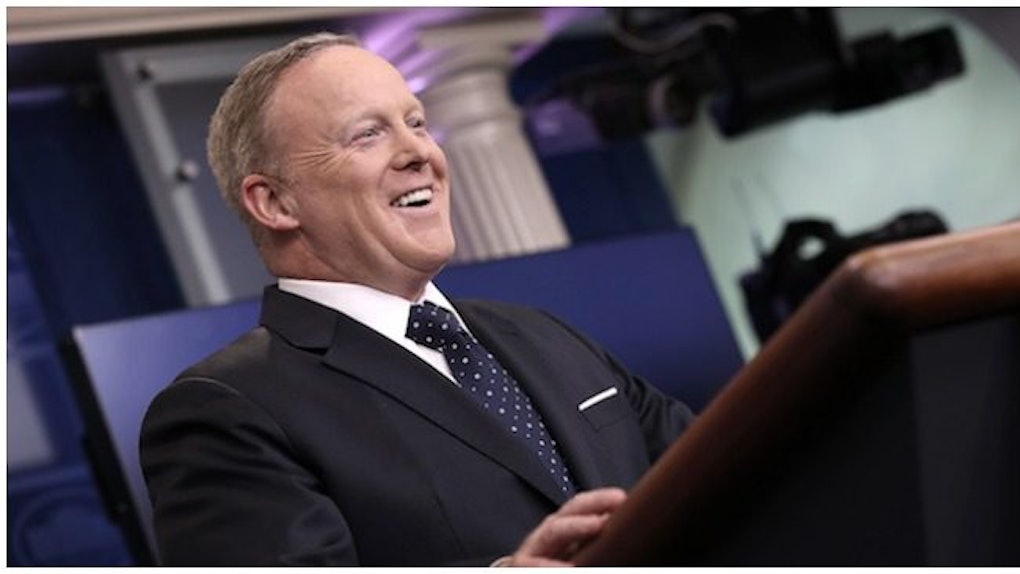 Sean Spicer Met Pope Francis After Getting Shut Down By Donald Trump’s Vatican Visit, & We’re Just Really Happy For Him

It finally freakin' happened, people. Former White House Press Secretary Sean Spicer met Pope Francis. And I am so flippin' excited for him, I practically don't have the words.

Just kidding. I totally do. Spicer meeting the Pope is just the juiciest post-breakup, I'm-living-my-best-life revenge ever.

Spicey finally got his: Vatican spokesman Greg Burke confirmed to the Associated Press on Tuesday, Aug. 29 that Spicer had attended the annual meeting of the International Catholic Legislators Network over the weekend, and FINALLY. MET. THE POPE. There is even photographic evidence of our problematic fave gazing on as the head of the Catholic Church waves at the audience. He even took a photo of the moment, because pics or it didn't happen.

Vatican Radio's English Facebook page posted the photograph of Spicer taking photos of His Holiness at the event, standing at the front row of a crowd of excited people at the Vatican.

Here he is, in the bottom right of the frame, camera phone in hand, slight smile on his face, gazing at the Pope (uh, through the camera). Man, Sean. Look up and enjoy the moment, will you? You can passive-aggressively tag Donald Trump in your 'gram post later.

Just to remind those who are not nearly as obsessed with Spicey as I am, during Trump's trip to the Vatican in May 2017, Spicer, a devout Catholic, was told he would not be meeting the Pope.

He had even bought rosaries for friends and family members in anticipation of the event and was reportedly (and understandably) excited to meet His Holiness. But Trump giveth (maybe), and Trump definitely taketh away. For Spicer was denied the opportunity to meet the leader of his church, seemingly a once-in-a-lifetime opportunity, and, if you ask a Catholic, a life-changing opportunity, at that.

It was an astonishingly cruel thing to do, and the move left many cringing -- even reporters with contentious relationships with Spicer. A source at CNN said of the move, "Wow. That's all he wanted."

Sure, Spicer was known for being combative at the podium and regularly lying and attempting to rewrite history on behalf of Trump, but still. After all he's done, let the guy meet the gosh darn Pope.

Photos from Trump's visit to the Vatican show a notably dour Pope Francis, scowling and looking generally miserable as he stands next to the president. Perhaps Francis and Spicey bonded over the chill that came up their spine every time Trump entered a room. And here's hoping Spicer got a selfie with Francis later.

According to the Associated Press, another guy proposed to his girlfriend in front of the Pope, so maybe Spicer didn't have the best day — but it was pretty high up there.