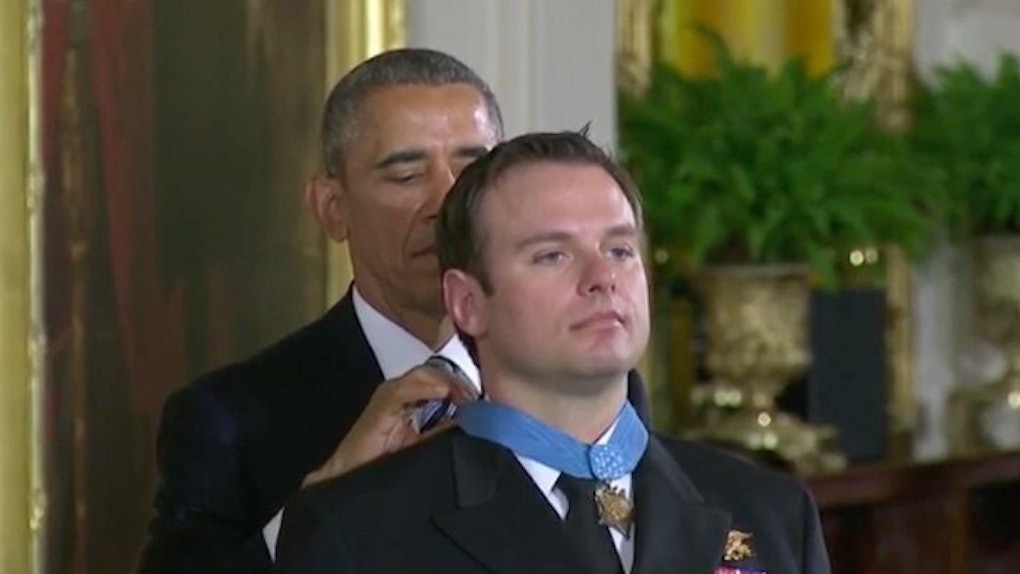 Byers, a member of SEAL Team 6, received the nation's highest military honor for his courageous actions during a hostage rescue mission in Afghanistan in December 2012. He helped rescue Dr. Dilip Joseph, an American medical doctor, who told CNN Byers gave him a "second chance in life."

During the mission, a fellow SEAL was shot in the head and killed as the rescue team went into the building where Joseph was being held hostage.

This didn't phase Byers, who entered, killed two guards and subdued another by pinning him against a wall with a hand to the throat while lying on top of Joseph to protect him from gunfire. In doing so, Byers allowed the rest of the team enough time to safely enter the room and finish the job.

Byers is only the 11th living service member to receive the medal for actions performed in Afghanistan, and just the sixth US Navy SEAL to receive it.

Byers, who is 36 years old and joined the Navy in 1998 as a corpsman, has a diverse history of service, and this is hardly the first military honor he's been awarded.

It's not often members of SEAL Team 6 are placed in the public eye, making the award ceremony for Byers a particularly special occasion.

Ed is defined by a deep sense of humility, he doesn't seek the spotlight, in fact he shuns it. He's the consummate quiet professional. I imagine there are a lot of other places he'd rather be than in front of all these cameras... Today's ceremony is truly unique -- a rare opportunity for the American people to get a glimpse of a special breed of warrior that so often serves in the shadows. We're a nation of more than 300 million Americans. Of these, less than 1 percent wear the uniform of our armed forces. Of these, just a small fraction serve in our Special Operations forces. Among those who train to become a SEAL, only a select few emerge and earn the right to wear that golden Trident... Now, given the nature of Ed's service, there is a lot that we cannot say today. Many of the operational details of his mission remain classified. Many of his teammates cannot be mentioned. And this is as it should be. Their success demands secrecy, and that secrecy saves lives... The American people may not always see them. We may not always hear of their success. But they are there in the thick of the fight, in the dark of night, achieving their mission. We thank God they're there. We sleep more peacefully in our beds tonight because patriots like these stand ready to answer our nation's call and protect our way of life -- now and forever.

Byers, a native of Ohio, was joined by dozens of family members, friends and special operators at the ceremony.