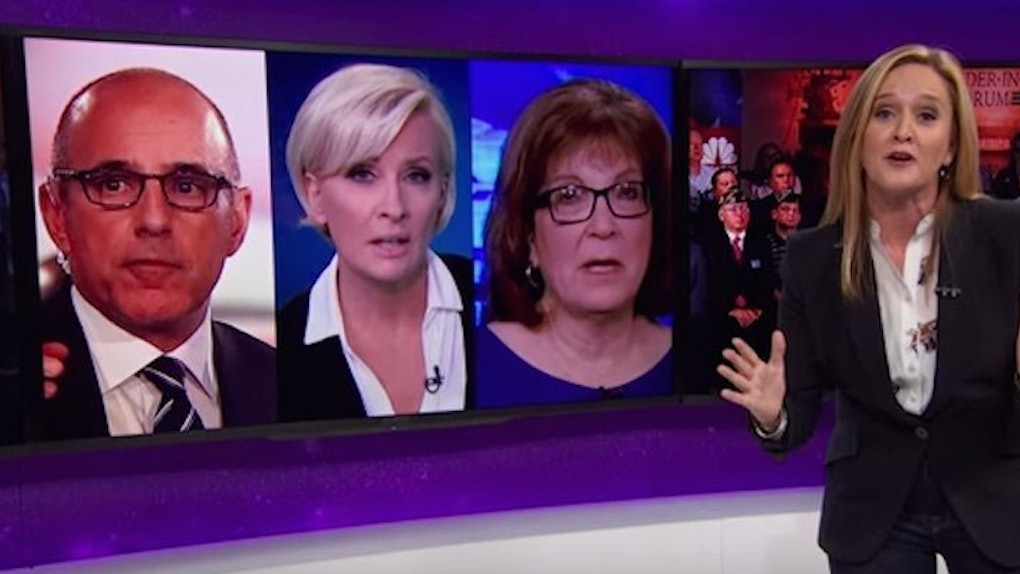 Samantha Bee Calls Out Media For Not Fact-Checking Trump

The media's job is to be objective as possible while fact-checking issues that impact the public. That's what it's supposed to do in theory, at least.

But, as Samantha Bee pointed out, it's been doing a pretty abhorrent job in this regard when it comes to Republican presidential nominee Donald Trump.

She gets that it's difficult and exhausting to fact-check a man who often seems completely averse to telling the truth, but she doesn't care -- that's what journalists are supposed to do.

This issue has come to the forefront of campaign coverage in the wake of Matt Lauer's disastrous political forum in which he failed miserably in challenging Trump on his position on the Iraq War.

Trump told Lauer he opposed the Iraq War from beginning (he didn't) and cited a 2004 article from Esquire to prove his point (the war started in 2003).

Lauer was seemingly not concerned with any of this.

As Bee pointed out, news anchors and political commentators have often resorted to saying that if the public is really concerned with something, they should take the time to dig deeper.

But, as Bee also pointed out, this is a blatant neglect of the responsibility of journalists.

In one of the more egregious examples she highlighted, Fox News anchor Chris Wallace, who is set to moderate a presidential debate, said it's not his responsibility to call out candidates when they lie.

As Wallace explained, it's not his job to be the "truth squad."

Wallace couldn't be more wrong. The purpose of the media is to dig for the truth, regardless of how uncomfortable it might be in the process.

Many Americans are far too busy trying to pay the bills and take care of their families to spend the time it takes to become experts on all of the issues that pertain to a presidential election.

In short, they should be able to rely on journalists to do this for them so they are properly informed before voting in November.

As Bee put it,

At some point, networks decided they could just ask questions and the answers would just be someone else's problem. Specifically, yours... Why can't the media just tell us what's true and what's bullshit?

It's a fair question -- it's not the public's job to fact-check politicians.

Yes, Bee acknowledged, it might be tough to say to a presidential candidate's face that he or she is lying.

That feels like an opinion, and reporters are meant to be as objective as possible. But, as Bee aptly highlighted,

Calling a liar a liar isn't an opinion if you can prove it. That's what we call a fact.

Watch the full segment above.