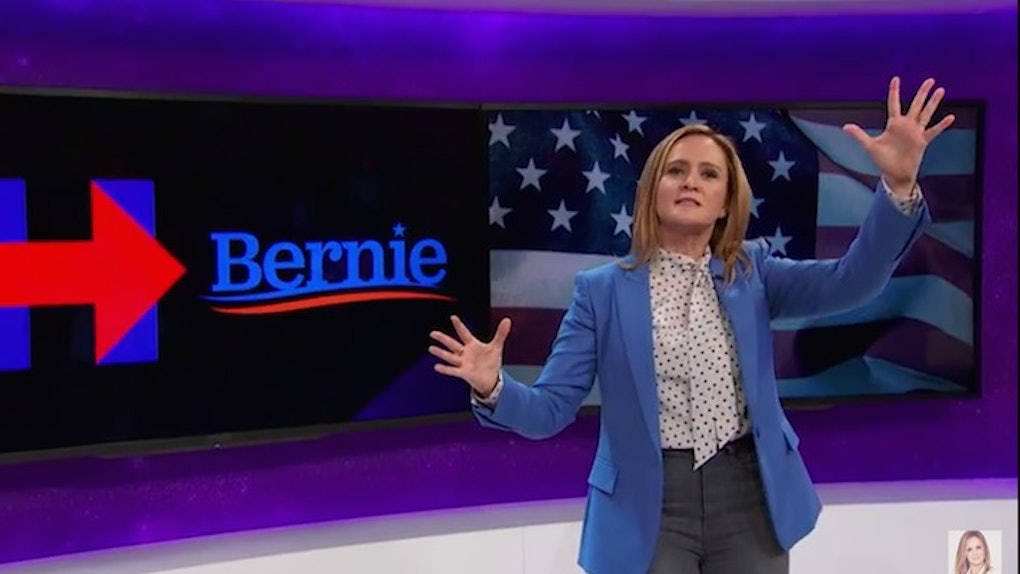 Bee addressed the sh*t that went down at the Nevada Democratic convention last week, where tons of Bernie Sanders supporters showed up, many were disqualified over rules and others responded by sending violent threats to the state party chairwoman, Roberta Lange.

Bee went in on the outsized outrage these supporters had, expertly pointing out why it was so wild.

Hillary Clinton won the popular vote in Nevada's caucus back in February, but Sanders supporters tried to use the system to get more votes via delegates. Bee said,

The Sanders campaign very smartly got a ton of their people to Clark County, which enabled him to pull ahead of Hillary in state delegates, even though he'd lost the popular vote. Which is totally fine when Bernie does it, so shut up.

The Bernie delegates who were disqualified were mostly kicked out because they reportedly didn't meet registration deadlines or provide acceptable IDs. Bee said,

I'm sorry, guys. A game's not rigged against you just because you refused to play it.

It's no big secret the American voting system is a clusterf*ck maze of confusion, but it helps to remember there are differences between missing voting registration deadlines and actual voter disenfranchisement.

There are serious forms of corruption, like voter ID laws that disproportionately prevent minority citizens from voting. But missing a deadline is just not following the rules.

Moreover, as Bee pointed out, Sanders supporters were angry they couldn't game the very same system they were calling corrupt, which kind of seems hypocritical.

Bee also addressed media reports of "thrown chairs" at the convention. Many Sanders supporters criticized the media for saying there were thrown chairs when there was no evidence of that. So, Bee showed a clip with a man waving a chair in the air.

Should the Democratic party make its primary process more democratic? God, yes! But the fact is, nobody stole the Nevada election. Sanders just got beat -- just like he did in New York, Georgia, Texas, Florida, most open primaries, most closed primaries and the popular vote.

She then intimated Sanders supporters' belief that any loss is proof of an illegitimate system is coming from Sanders' own rhetoric.

Bee concluded by criticizing Sanders' statement after the violent threats were sent to Lange. She said,

OK, no. 'I'm sorry I hurt you, but you shouldn't have made me so mad' is not an acceptable reaction here -- unless you're running for Bad Boyfriend in Chief.

Bee also took time on her show Monday night to explain the origins of the pro-life anti-abortion movement in the Republican party. You can check that out here.