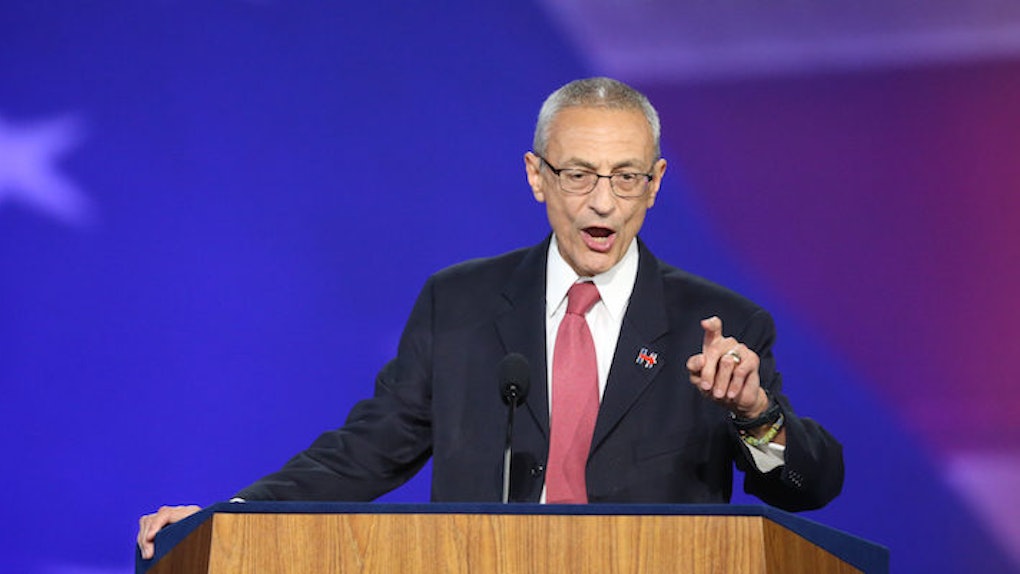 Russian Hackers Got Into Podesta Emails From One Typo

Russian hackers were able to get into the email account of Hillary Clinton's campaign chairman thanks to one tragic typo.

The New York Times published a big piece on exactly how the Russian hacking went down with the Democratic National Committee, the Democratic Congressional Campaign Committee and Podesta on Tuesday afternoon.

It was extremely simple for the hackers to get into Podesta's account, ultimately.

All they did was send a phishing email.

Phishing emails are those emails your mom warns you about in forwarded messages. They are made to look like real emails from your email account (or another organization) and they tell you to change your account password (or provide some other information) to stop something bad from happening.

In this particular case, the hackers sent a bunch of phishing emails.

The emails were purportedly from email accounts and told the users,

Podesta got this email. One of the aides who also used his email account forwarded that email to a computer technician to see if it was real.

This is a legitimate email. John needs to change his password immediately, and ensure that two-factor authentication is turned on his account.

In a bittersweetly ironic twist, you can actually see that email in the WikiLeaks hacked emails leak.

So a Podesta aide clicked to change his account's password.

And then the Russian hackers had access to his 60,000 emails.

They spread them through WikiLeaks.

The hacked leaks wreaked havoc on the Clinton campaign, despite revealing no major controversies. There were just so many of them, for such a prolonged amount of time, that they somehow managed to overpower the sound of Donald Trump saying he grabs women "by the pussy."

Delavan, however, did not mean to say that the email was "legitimate."

He meant to type that the phishing email was "illegitimate," the Times reported. But he had a typo.

This error "has plagued him ever since," according to the Times.

To be fair to Delavan, there were a series of mistakes that led to the mass hacking leaks.

The FBI contacted the DNC, but failed to clarify that they, uh, were actually the FBI.

The FBI failed to contact any high-powered person at the DNC.

The FBI did not go to the DNC offices in person to tell them about this.

The DNC, meanwhile, is a nonprofit without sufficient resources to stop a major attack like this, clearly.

Through a variety of weak links, the Russian hackers got in.

The White House was hesitant about what to do before the election, possibly fearing greater repercussions from Russia.

Investigations are now being carried out.