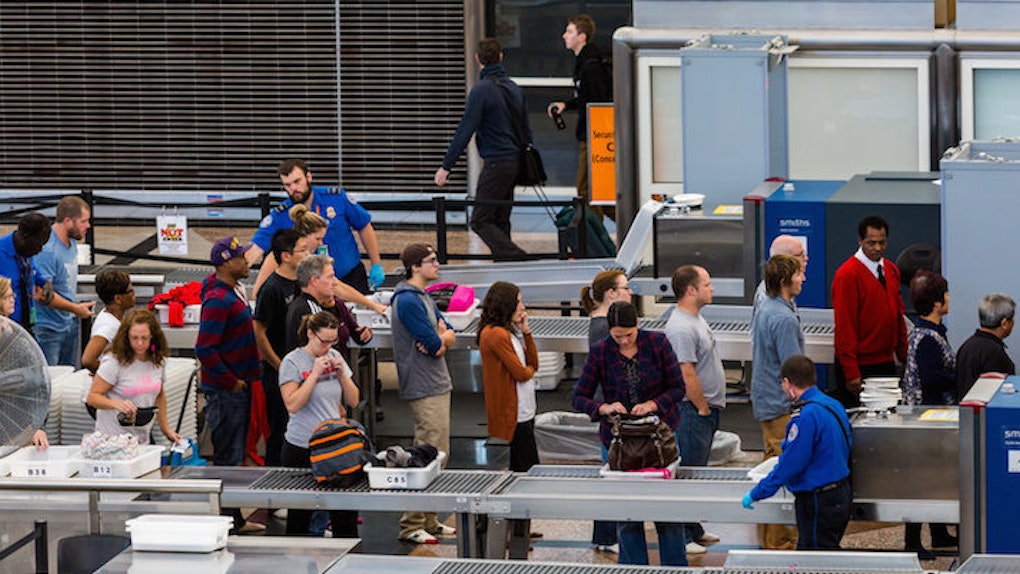 Keep Hating The TSA: The Searches And Pat Downs Aren't Protecting You

It's safe to say the Transportation Security Administration (TSA) is one of the most despised organizations in the United States.

Between the tedious lines, intrusive pat downs (groping), blatant racial profiling, damaged property and general inconvenience, it's not hard to see why.

In spite of all this, people have accepted it as a necessary evil given it's designed to protect travelers. It's like a seatbelt: No one likes wearing it, but it saves lives. It's the old trade-off between liberty and security. You have to sacrifice some freedoms in order to be safe, or so we've been told.

Simply put, the TSA might suck, but it's there to stop terrorists and other malevolent individuals from boarding planes and wreaking havoc.

But we've been duped.

This week, the TSA was revealed as one big facade, and all those who've viewed it with disdain and suspicion are now vindicated.

As an organization, it's so fundamentally ineffectual it's almost laughable -- if it weren't for the fact the joke has been on American taxpayers.

An internal investigation, in which Homeland Security Red Teams posed as passengers, found the TSA failed to detect banned weapons or mock explosives 95 percent of the time (67 out of 70 trials), ABC News reports. The undercover trials were conducted at dozens of America's most frequented airports.

In perhaps the most embarrassing example, TSA screeners failed to detect a fake explosive taped to the back of one of the undercover agents, even after this individual set off the metal detector and was pat down.

This represents a stunning level of ineptitude, and it's incredibly embarrassing for the TSA, the Department of Homeland Security and the Obama administration as a whole.

It comes as no surprise the head of the TSA, Melvin Carraway, lost his job in the wake of these revelations.

But this isn't the first time the TSA has proven to be an inherently useless entity. In 2013, a federal review found the Screening of Passengers by Observation Techniques (SPOT) program, designed to aid thousands of TSA agents in spotting terrorists in lines or crowds based on behavior, was completely fruitless. At that point, around $900 million had been spent (wasted) on SPOT.

Not to mention, as the LA Times highlights, hundreds of TSA security badges have recently gone missing at airports in Atlanta and San Diego and it's not clear where they could have ended up.

In other words, this recent security lapse is hardly an isolated incident.

Moreover, the TSA hasn't just failed to fulfill it's innate purpose, it's also proven to be a decidedly corrupt and arguably criminal organization. As Huffington Post notes, TSA agents have robbed and assaulted passengers on more than one occasion.

There have also been multiple incidents in which TSA agents have been involved in such activities as drug trafficking and downloading child pornography.

The TSA was established in the wake of the terror attacks on September 11, 2001. At the time, America was in a great deal of shock and pain, and it's understandable we desired to take more measures to ensure nothing like that ever happened again.

But, like many of our other reactions to that awful day, the TSA has fallen short. It's yet another a painful reminder our overall response to 9/11 has been expensive, misguided and unproductive.

In establishing the TSA, the US failed to recognize it wasn't simply a lapse in airport security that allowed the 9/11 attacks to take place.

It's more convoluted than that, and in many ways a product of America's dubious activities abroad and the Bush administration's failure to respond to CIA intelligence about Osama bin Laden, Al Qaeda and an impending attack.

This is not to say 9/11 was justified or that anyone specifically is to blame -- other than the murderous terrorists themselves, of course.

But we still have to be brutally honest about the narrative of that day, in terms of both its prelude and aftermath, in order to prevent terrorist attacks in the future.

Indeed, the TSA is an impotent byproduct of the War on Terror that doesn't really protect anyone and sucks up over $5 billion in federal funding every year. There is no substantial evidence it saves lives.

It's arguably time to shut the TSA down and make airlines responsible for security. If nothing else, it's certainly time to have a concerted conversation about this.

Why should we waste our time and money on an organization that only serves to inconvenience, and, at times, violate the public? It's a fair question, and one the Department of Homeland Security, which the TSA has been a part of since 2003, needs to publicly answer.

President Obama has nominated Coast Guard Vice Admiral Pete Neffenger to be the new head of the TSA, but his appointment has yet to be confirmed by the Senate.

This transitional phase provides the ideal opportunity for the Obama administration, the Department of Homeland Security and Congress to ask some deep questions about the TSA, its ultimate purpose and its future.