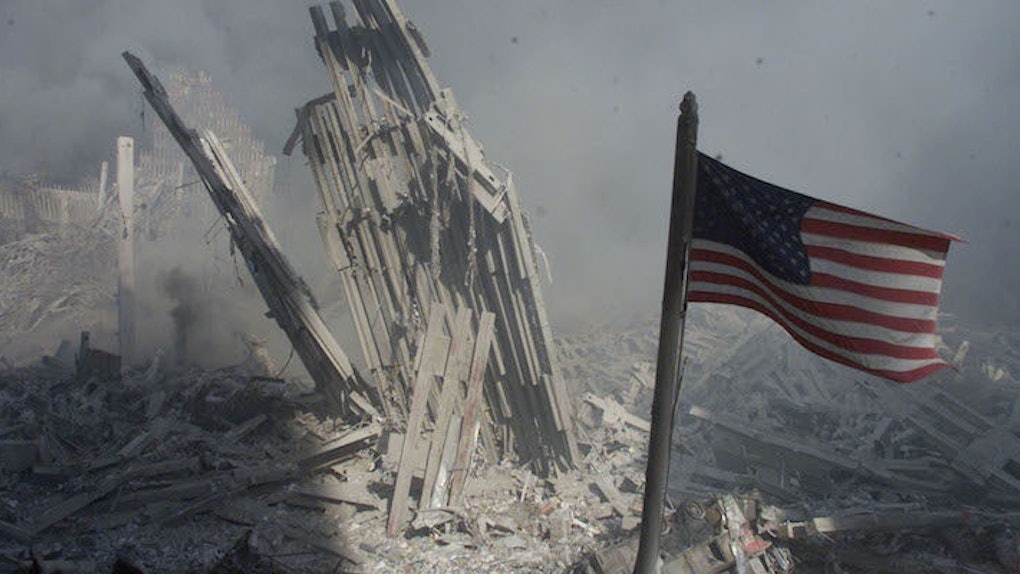 What Millennials Can Teach Future Generations About 9/11, So That History Never Repeats Itself

Millennials were born between 1980 and 2000 and most of us grew up during the 80s and 90s. Some of us are old enough to remember the fall of the Berlin Wall, the collapse of the Soviet Union and the end of the Cold War.

The vast majority of us, however, definitely remember the events of September 11, 2001. This tragic and horrific day will forever haunt our psyche and it is ingrained into our collective memory.

Today, the generation that lived through the national tragedy of Pearl Harbor is beginning to fade from this world. Any firsthand accounts of this event and its ultimate consequences will soon be unattainable unless they're acquired from books or recordings.

One day, the same will be true for 9/11. Indeed, Millennials are the last generation who will remember 9/11. When our grandparents and parents pass on, it will be the duty of this generation to tell the true story of that awful day.

To put this into context: Current high school freshmen were born in 2000 and 2001. They have no memory of 9/11. None of them will remember watching the television in horror as the planes crashed into the two towers. They will not remember President George W. Bush's impassioned speech about exacting revenge on the perpetrators. And they won't likely remember the subsequent invasions of Afghanistan and Iraq.

It will ultimately be Millennials who have to recall these events to future generations. We must be able to explain what happened that day, why it happened and how we responded as a nation. The importance of this task cannot be understated. History teaches us where we came from, why we are and how we might move this world forward.

I was 13 years old and in eighth grade on 9/11. I remember that day more vividly than most of the days that have come since. Memory has a funny way of doing that. It permanently records trauma, like some sort of mental tattoo.

Like countless other Americans, I personally knew people that died on that day. I also went to Ground Zero shortly after the attacks, and was simultaneously shocked -- yet not at all surprised -- that smoke was still rising from what had been the World Trade Center. Mainly, it was just painful to know that so many people had suffered and died there.

I remember being overwhelmed with emotion as I saw the hundreds, if not thousands, of photos that people had hung up as they searched for their missing loved ones. Many of these people were never found.

It was an incredibly painful day for so many reasons. No matter what the circumstances, such violence and destruction is inherently devastating to the human spirit. I was encouraged, however, by the resurgence of patriotism and solidarity across the nation in the weeks and months that followed 9/11. Perhaps the only positive aspect of tragedy is that it brings people together.

It's not hard to miss this sentiment in the present day, as our country is now nearly just as polarized as it was during the Civil War. Republicans and Democrats can barely have a civil conversation, let alone stand to be in the same room with each other. Consequently, the nation's progress has been completely derailed.

America's history is as complex as its current politics. This country has done wonderful things and inspired the world with its achievements. Yet, it's also been responsible for some very shameful and terrible things. This is true both in terms of its domestic history and its activities abroad.

Let me be clear: America did not deserve to be attacked on September 11; that is not the argument here.

It's just important to acknowledge that the world is not black and white, there are shades of grey. The United States is an incredible country, one with the greatest potential to change the world. In many ways it already has, and we continue to stand as a testament to freedom, progress and hope.

However, we have to address our past mistakes or else we risk committing them again. It's important to approach events like 9/11 with as much objectivity as possible, in order to ensure that they never occur again.

When 9/11 happened, it was difficult to understand what could have inspired anyone to hate the United States and its people so much. I had grown up believing America was a beacon of freedom and hope for the world. It baffled me that anyone could dislike my country... I was young and unaware of the darker side of my nation's history.

I asked myself, "Why do they hate us?"

Americans are asking, 'Why do they hate us?' They hate what they see right here in this chamber: a democratically elected government. Their leaders are self-appointed. They hate our freedoms: our freedom of religion, our freedom of speech, our freedom to vote and assemble and disagree with each other.

This was an easy answer to accept. Instead of questioning what we might have done to provoke such an attack, we accepted the conclusion that they were simply jealous of our way of life. We ignored the history of American imperialism and chose to believe, instead, that because our country was so insurmountably amazing it was bound to make others envious.

This is a falsity that Millennials have a duty to expose.

With that said, there is no justification for acts of terror. Violently attacking civilians is despicable, regardless of the circumstances. None of the nearly 3,000 individuals who lost their lives on 9/11 deserved to die.

It's important to be honest about our past in order to build a better future. The United States, as the most powerful country in the world, is often expected to act in extremely complex, difficult and dangerous situations.

This is our burden and we will always be subjected to criticism regardless of our decisions and actions. With that said, if we take a closer look at what we've done wrong in the past, we will be more likely to establish peace between nations in the long run. America is the most influential player in the world, and there is no country better suited for this role.

We were angry and upset after 9/11 and understandably so. Recalling that day that still brings tears to my eyes. But as evidenced by our past, when we let our emotions and rage get the best of us, very little good can come from it.

The invasion of Iraq in 2003 was illegal and violated the UN charter. Consequently, it was extremely damaging to the global standing of the United States. Not to mention, it ultimately decimated Iraq and its people.

We continue to deal with the consequences of these actions and struggle to find our role in the world in the post 9/11 era.

It's important that we teach future generations that emotive responses to tragic events cloud judgment. Simply put, it's easy to seek revenge, but it's far more difficult to stop, take a deep breath and think about why something happened.

Likewise, it's very difficult to be logical about a situation during times of distress, which is perhaps why a majority of Americans initially supported the invasions of Afghanistan and Iraq. Now, even veterans of these wars say they were not worth it.

We should not be too critical of ourselves in regards to our response to 9/11; in the event of any tragedy, people are bound to struggle in the days that come. With that said, we cannot ignore the consequences of the events over the past 13 years.

The War in Afghanistan is now the longest conflict in US history, and it has failed to eradicate the Taliban. And yes, the problems that the United States now faces in the Middle East are of its own creation.

The moral of the story is that we must learn from history, and understand the value of other people's perspectives and ways of life. We need to realize that while America is an amazing country, it's also capable of immense transgressions.

It's important that we continue to be honest about our storied but convoluted history, or we will never live up to the ideals upon which this nation was founded.

This is particularly important to remember as we escalate the fight against ISIS. This extremist organization has already committed horrific and enraging acts, and has brutally executed two American journalists.

Yet, we cannot allow our emotions to dictate our actions in this situation. We have to approach this situation rationally, but also without fear of being aggressive and assertive when necessary.

This is the key to success in foreign policy, and a very important lesson for both Millennials and future generations of Americans. By building a better world, we will honor the memory of those lost on 9/11.

We will never forget.