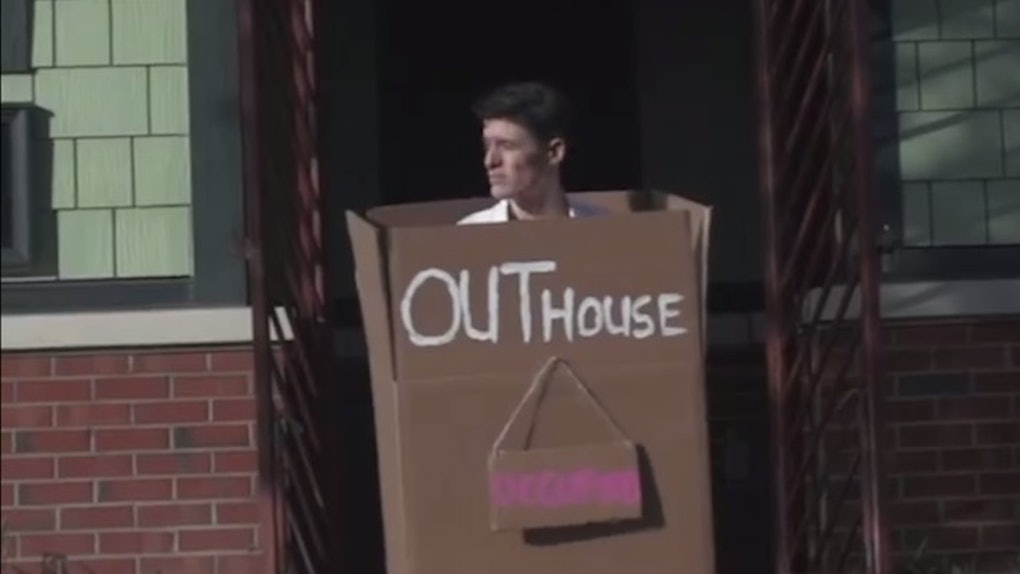 The controversial bill, signed by Governor Pat McCrory says people must use the bathroom of the gender listed on their birth certificate. Defenders of the bill say it's in place to protect women and children from molestation, which is a completely unfounded paranoia.

The bill is discriminatory towards transgender people -- and, Dove argues, towards pretty much everybody else.

Dove, 26, put a team together to look into the law. Along with a group of collaborators, she went out to North Carolina to film several videos pointing out the absurdities and danger of the bill. She told Elite Daily:

It was a whole community of people who decided to educate, not hate.

Her ultimate goal is to get the law taken down, mainly by pointing out that it's unenforceable.

Last week, Dove released the first of several videos from her trip to North Carolina.

Dove doesn't believe in genders. As she told Elite Daily:

I personally believe that all humans are just organisms with genitalia and hormones that are unique to ourselves.

Dove intimately understands the dangers of gender stereotypes. She grew up thinking she was “a very ugly woman.”

But then people assumed she was a “handsome guy” and, as she described it, her whole world changed.

When Dove is assumed to be a white man, she experiences more social pressure -- people expect her to pay the bill and “have [her] shit together.” Dove said:

There is a lot of social pressure, but it's mostly privilege.

When Dove is assumed to be a white woman, the world treats her differently. And when she wears a dress, she is sometimes assumed to be a transgender woman -- and people start calling her “brave” for wearing a dress.

Dove has modeled clothes intended for both men and women, but she sees clothes as constructed by design, not gender. She said:

If I buy it, I'll be damned if someone tells me I can't wear it… I'll wear whatever the f*ck I want to.

Although Dove generally thrives in androgyny, gender prescriptions have affected her.

I have this thing called 'bathroom anxiety.'

Dove has faced discrimination for using gendered restrooms. She was once pulled out of a bar restroom in London by security with her pants down. She said:

If I didn't have a vagina, I would've been thrown out of that bar.

She gets especially nervous in airports, thinking people will call security to take her out of bathrooms. She waits to use the restroom until she gets on a plane.

For some time, Dove wore a t-shirt that said “I'm not a boy” to use the restroom.

Her experiences prompted her to see the North Carolina bathroom bill as harmful for everyone.

This bill really hits home for me because it's beyond transgender. It's oppressing all people and the way we present ourselves.

As Dove's team analyzed, to enforce the North Carolina bathroom bill, police officers would have to profile based on gender -- a practice that is banned at the federal level.

To do this, officers would have to have a set of characteristics for what each gender looks like. This could include breasts, muscle tone, facial hair, height and clothing.

But ultimately, none of those characteristics can accurately determine a person's gender, for an endless variety of reasons. Consider, for instance, a woman who went through chemotherapy and a mastectomy for breast cancer. She may have short hair and no breasts, but that by no means makes her not a woman.

This stereotyping is damaging, Dove said. It can be traumatic for a person and cause eating disorders and depression.

To stop a person from using a restroom, an officer would have to follow some set of useless gender rules.

But in North Carolina, you're only required to give an officer your birth certificate or ID if you are in a vehicle or reasonably suspicious of committing a crime. Dove wrote:

Because of this diversity in expression and the fact that there is no legal definition of what a birth certificate stated 'FEMALE' LOOKS like (or a MALE) there can be no 'REASONABLE' SUSPICION that anyone is MALE or FEMALE on their birth certificate.

Based on this reasoning, a person does not have to give an officer their birth certificate or ID -- therefore, the North Carolina bathroom law is not enforceable or valid.

Dove wants to spread this information about the North Carolina bathroom law to empower people to protect themselves from discrimination.

While in North Carolina, Dove filmed several videos and made demonstrations, all with the intention of peaceably educating people.

Dove orchestrated a sit-in in bathrooms of the North Carolina Legislative Building and left educational reading material for legislators on bathroom doors. More videos are being released in coming weeks.

Ultimately, Dove believes keeping people safe in bathrooms has nothing to do with gender and gender beliefs. She said:

Violators come in all sexes, all sizes, all types of people… We need to really just separate violent from nonviolent people.

Dove reserves her judgment for the legislators responsible for the bill, like Governor McCrory. She doesn't blame police officers -- many of whom have said they're confused by the bill themselves -- and she has some love for North Carolina:

It's just so sad that this state that has come so far gets such a bad rap for one move made by a small amount of people that don't represent everyone.

Dove noted McCrory keeps mixing up “gender” and sex” in discussing this bill, which shows just how little he understands about various identity statuses. Dove said:

How can you represent an entire state of people and not understand a portion of them, even on a linguistic level?

Despite criticism and protests, the North Carolina bathroom bill still stands -- for now.