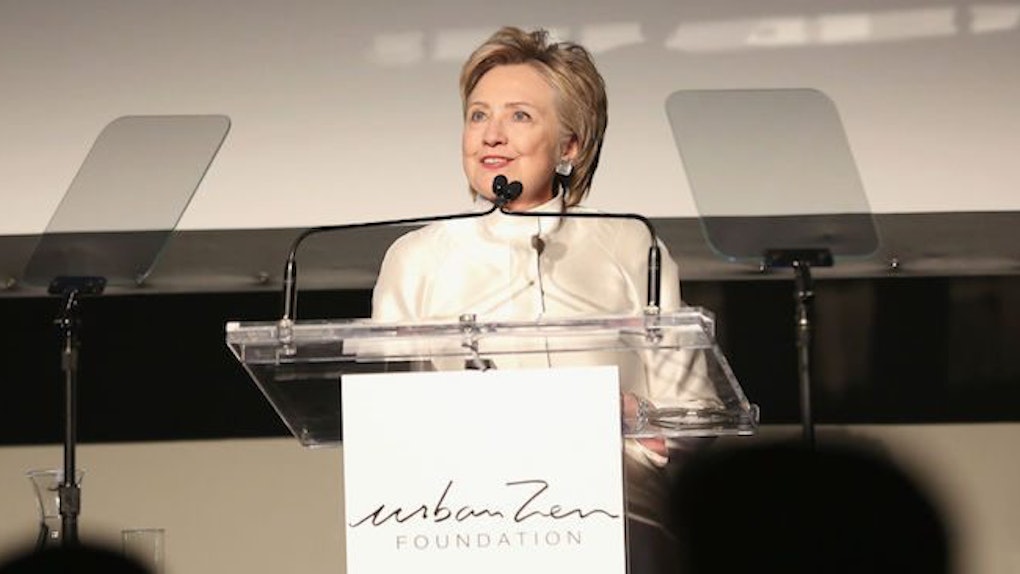 It's the time of year again where that daunting task of picking that perfectly clever Halloween costume hangs heavy over everyone's heads. Let's avoid the last minute panic that leaves us frantically scrolling through Pinterest for the easiest and cheapest costume to put together on the night of Oct. 30. Instead, let's trade in procrastination for a more prepared approach to the upcoming holiday this year. Of course, there are the classic go-to Halloween costumes that remain timeless, but how about considering a costume that is socially relevant, and in a way mournful of what could have been? For those that are #StillWithHer, here are some ideas for Hillary Clinton Halloween costumes that can maybe help bring closure to the year-long grieving process.

Clinton fans know better than anyone that one cannot separate the pantsuit from Clinton, and vice versa. They are almost synonymous with each other; something so central to her very public existence and the first image that comes to mind when picturing Clinton. So to start, the first obvious option for a Clinton-inspired costume would be the classic pantsuit, which can have plenty of options.

The pantsuit is a classic, comfortable, and warm option for Halloween night -- and it's versatile as well. With all the color options that the pantsuit presents, you can almost guarantee that the color you pick will not be repeated by a friend or random person you encounter. The Le Suit collection of women's pantsuits are a great place to look for one. You can find their merchandise on Amazon and Macy's.

If you're looking to add the "power pearls," which is an obligatory addition to most of Clinton's pantsuit looks, you can find them here.

If the colored pantsuit isn't for you, you might consider the all-white pantsuit, a look Clinton wore at significant events during the election, including the Democratic National Convention, a debate, and Donald Trump's January Inauguration. The all-white outfit symbolized women's suffrage with a powerful message of resistance and solidarity. Shop the white pantsuit look at Tahari or Midnight Velvet.

If you want to take it back a few years to Clinton's earlier days, try recreating the classic pink coat look at former President Bill Clinton's inauguration in 1997. This is a softer look for Clinton, but you are sure to stand out, since it is still one of Clinton's pinnacle public appearance looks. Some places to find that barbie pink coat are Chadwicks, Appleseed's, and Bonanza.

To pair with the coat, you can find the thick pink turtleneck at OASAP or Woolrich. If you want to go the extra mile for the friends that might not pick up on the coat, you can grab a blonde wig that is sure to be a giveaway.

If you're going for the most obvious way to literally be Hillary Clinton, there are always plenty of masks that are a dead giveaway. You can find some at Halloween costumes (where you can also find a Bill Clinton mask, or Donald Trump mask for your costume partner), Find Costume, or Buy Payoff.

This is as retro as it gets for Clinton's looks. Recreate the recent Wellesley grad portraits '60s look with an easy white button up shirt from H&M and some fun striped pants from Chico's or Gold Case.

If you have two Halloween parties to attend, you can also reuse the white button up H&M shirt to recreate this "Bar Talk" look from Clinton's SNL appearance.

An easy giveaway or addition to any of the Clinton costumes would be the blonde wig. Pair it with any of the pantsuits, white button ups, or pearls.

A more chic and warm look would be Clinton's coat of many colors that she wore back in 2011 on her visit to Afghanistan and has since wore at other events around the U.S. Find similar embroidered coats on eBay for your costume.

If you're going for a more subtle Clinton costume this year that says, "I'm still with her" and is more inspired by solidarity than impersonating her identity, it's never too late to buy a "Nasty Woman" t-shirt that Clinton has promoted herself. Here are some ideas for the "Nasty Woman" inspired Halloween costumes

With Halloween just right around the corner, make sure you stay on top of getting a costume ready this year. Nobody wants to be the friend whose last-minute costume decision and effort is so obviously displayed on their recycled and oh-so original cat costume. And if you're planning to recreate the Clinton look on Halloween night this year, it can't hurt to stick a #StillWithHer pin somewhere on your costume, just as a last-ditch effort to express your enduring solidarity for the people weren't already aware of who you voted for last year.