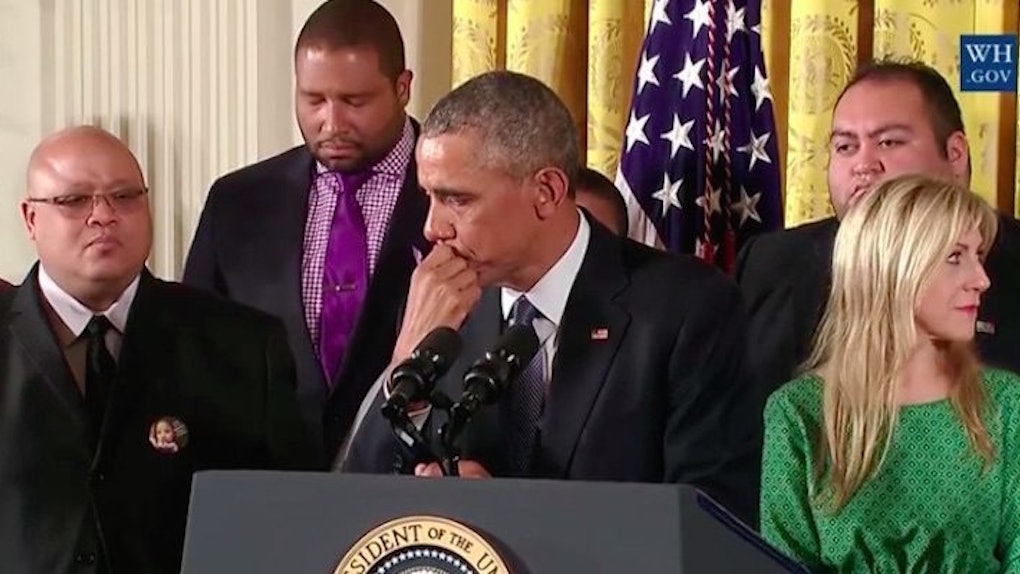 "People are dying. And the constant excuses for inaction no longer do. No longer suffice. That's why we're here today." —@POTUS — The White House (@WhiteHouse) January 5, 2016

It's clear the president is fed up with inaction in Congress on this issue, ultimately leading him to this point.

In an impassioned speech, he argued gun control is not about placing burdensome restrictions on gun owners; it's about common sense and the safety of Americans.

"This is not a plot to take away everybody's guns." - @POTUS #StopGunViolence — Elite Daily (@EliteDaily) January 5, 2016

At one point, while recalling the tragic and heartbreaking shooting at Sandy Hook Elementary School in 2012, the president became quite emotional -- tears streamed down his face. It was a powerful and touching moment.

"Every time I think about those kids, it gets me mad" - @POTUS gets emotional about Sandy Hook. #StopGunViolence pic.twitter.com/qYhWHj0fZv — Elite Daily (@EliteDaily) January 5, 2016

This is obviously an issue the president is extremely passionate about.

Obama at his best when discussing the issue of gun violence. It's an issue clearly that he cares about deeply in his heart. #StopGunViolence — Michael Skolnik (@MichaelSkolnik) January 5, 2016

Shockingly, gun violence kills more Americans every year than terrorism has since 9/11.

Indeed, this is a huge problem, and it's one we cannot afford to ignore.

Accordingly, it's hard to disagree with the president on this issue, particularly given Congress is seemingly unwilling to do anything to address it.

The president's executive action will expand background checks and make them more efficient, and require those selling firearms to get licenses and conduct background checks. It will also add 200 new ATF agents and investigators.

"Anybody in the business of selling firearms must get a license and conduct background checks" —@POTUS pic.twitter.com/6E71ZGUvYM — The White House (@WhiteHouse) January 5, 2016

It also calls for investing more resources in mental health care and expanding access to treatments, as well as increased research into gun safety technology.

"We're going to do more to help those suffering from mental illness get the help they need" —@POTUS pic.twitter.com/lvvpQ2IYzj — The White House (@WhiteHouse) January 5, 2016

President Obama is aware gun control will not completely eradicate gun violence, but it's apparent he feels doing nothing is both counterintuitive and unethical.

"We maybe can't save everybody, but we could save some." - @POTUS StopGunViolence — Elite Daily (@EliteDaily) January 5, 2016

"If we love our kids...then we can find the courage to cut through all the noise." —@POTUS #StopGunViolence — Elite Daily (@EliteDaily) January 5, 2016

Watch the full speech below.