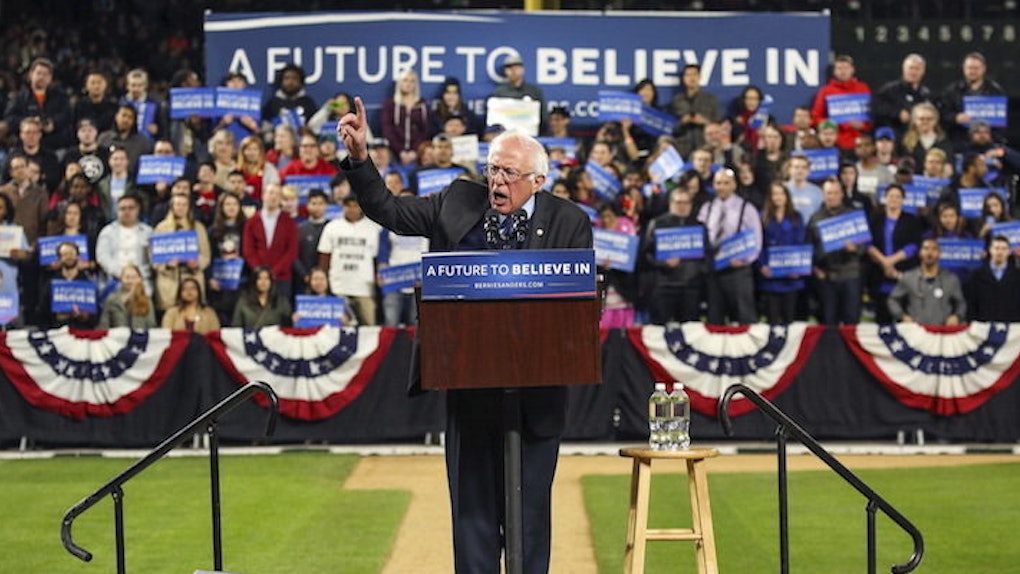 How The Pope And Bernie Sanders Are The Unlikely Millennial Leaders

When it comes to politics, Millennials are an enigmatic generation. Attempts to define their political outlook and general worldview have habitually come up short. Given the size and diversity of the generation, this isn't all that surprising.

But two leaders in particular have consistently proven to share the same values and perspectives as Generation-Y: Pope Francis and Bernie Sanders.

No one would've predicted it, but a Jewish, self-proclaimed democratic socialist from Vermont and the head of the Catholic Church are actually the leaders Millennials have been calling for all along.

They're not afraid to be brutally honest and are deeply critical of those who seek to perpetuate the status quo. Both are champions of the environment, exhibit populist ideals and are genuinely concerned for today's youth.

Correspondingly, Sanders has publicly expressed his affinity for the Pope on a number of occasions and frequently quotes him on his social media accounts. In his view, the Pope is the progressive religious leader the world has been waiting for.

.@Pontifex: While the income of a minority is increasing exponentially, that of the majority is crumbling. pic.twitter.com/u0FQjG0Vzk — Bernie Sanders (@SenSanders) June 21, 2015

Indeed, Sanders and Pope Francis fundamentally agree on a number of issues, coinciding with the viewpoints of a majority of Generation-Y.

It's reasonable to argue no other presidential candidate agrees with Pope Francis more than Sanders, and no other leaders align with Millennials more than these two.

Bernie Sanders and Pope Francis might both be over 70, but they're Millennials at heart.

They both believe wealth inequality is immoral.

It's almost impossible to distinguish between statements made by Pope Francis and Bernie Sanders on wealth inequality.

Both believe the gap between the rich and poor has reached astronomical proportions, and it's the duty of all humans to help remedy this.

During his announcement speech, Sanders contended:

Likewise, Pope Francis has characterized inequality as "the root of social evil," frequently rallying against corporate interests and the increasing disparity between the rich and poor.

He consistently challenges capitalism, and has been labeled a Marxist because of it. Unlike Sanders, however, he doesn't publicly embrace such an image.

Interestingly, Sanders has actually argued the Pope is more radical than he is on economics and has praised him for his stances, stating:

[Pope Francis is] saying, you know what… the economy should serve people, not people serving the economy. The market is the billionaire class who want to get richer, that is what it is. I don't think we should have an economy serving their needs.

It appears Millennials would agree, as a 2014 Harvard Public Opinion Project poll highlighted a majority of this generation (52 percent) believes the wealth gap is a major problem.

Millennials are also deeply distrustful of Wall Street and other monetary institutions. Given they face extraordinary levels of student loan debt and were impacted disproportionately by the Great Recession, this is hardly unanticipated.

They both feel current rates of youth unemployment are inexcusable.

The biggest issue facing Millennials is unemployment. They currently comprise around 40 percent of unemployed workers in the US.

Despite being perhaps the most educated generation in history, Millennials aren't finding jobs. This problem is not unique to the US either, it's global.

Both Pope Francis and Bernie Sanders find this unjustifiable.

The Pope once contended:

We risk having a generation that hasn't held a job. Personal dignity comes from working, from earning your bread. Young people are in a crisis.

It is beyond comprehension that we, as a nation, have not focused attention on the fact that millions of young people are unable to find work and begin their careers in a productive economy. We cannot turn our backs on this national tragedy.

Accordingly, Sanders has asked Congress to spend $5.5 billion on jobs for young people. In his opinion, the fact so many young people are unemployed reveals America's misguided priorities and policies.

It is time to focus on the needs of the young people of our country and not more tax breaks for billionaires pic.twitter.com/SHVw3NJfzQ — Bernie Sanders (@SenSanders) June 22, 2015

The Pope and Sanders believe it's irresponsible to deny climate change.

Last week, Pope Francis made some powerful remarks on climate change, publicly scolding all those who choose denial in the face of scientific consensus.

The earth, our home, is beginning to look more and more like an immense pile of filth. — Pope Francis (@Pontifex) June 18, 2015

The deterioration of the environment and of society affect the most vulnerable people on the planet. — Pope Francis (@Pontifex) June 18, 2015

Leaving an inhabitable planet to future generations is, first and foremost, up to us. — Pope Francis (@Pontifex) June 19, 2015

The Pope presented climate change not just as an environmental and economic issue, but as a deeply moral matter.

Bernie Sanders was quick to praise Pope Francis for his remarks.

On the issue of climate change, Sanders is arguably the most progressive and active politician in the Senate.

He has consistently urged for policies aimed at reducing carbon emissions, while highlighting the extreme importance of fully acknowledging the existence and impact of climate change.

Sanders believes it's imperative we invest in more sustainable forms of energy.

His position on climate change is simple: Like Pope Francis, he believes denial is reckless and indefensible. During his announcement in May, he stated:

The debate is over. The scientific community has spoken in a virtually unanimous voice. Climate change is real. It is caused by human activity and it is already causing devastating problems in the United States and around the world.

Millennials are definitely on the same page as both the Pope and Sanders. A majority of this generation (75 percent) agrees climate change is real and due to human activities (55 percent).

According to Pew Research Center, the vast majority of Generation-Y (71 percent) also feels strongly about the need to focus on finding alternative forms of energy.

Thus, on the issue of climate change, Pope Francis and Bernie Sanders can count Millennials as allies.

With that said, it would be wrong to argue Pope Francis, Bernie Sanders and Generation-Y agree on everything. But there is an evident consensus between these two men and Millennials on a number of vital issues.

With their populist messages, focus on social justice and common-sense approach to issues, Pope Francis and Bernie Sanders have arisen as the unlikely mouthpieces of this dynamic generation.