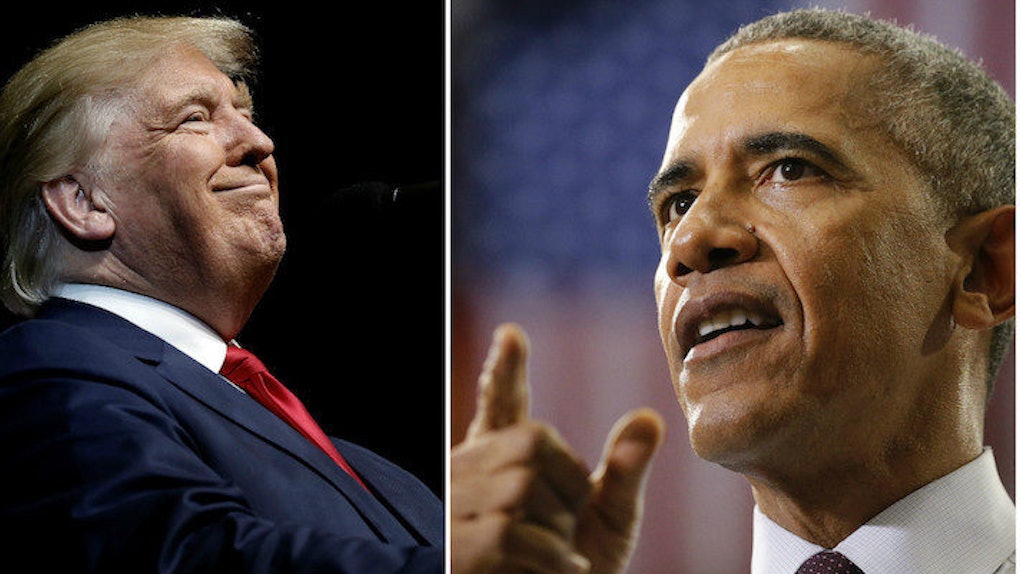 As if you need even more evidence Donald Trump is a confusing human being and chronic liar...

Remember on Friday at a rally in Hershey, Pennsylvania, when he accused President Barack Obama of "screaming" at a protester in his audience?

The candidate was referring to a man who stood up, in uniform, waving a Trump sign while Obama spoke at Fayetteville State University in North Carolina earlier that day. Trump said,

He was talking to the protester, screaming at him, really screaming at him. By the way, if I spoke the way Obama spoke to that protester they would say, "He became unhinged." You have to go back and look and study and see what happened. They never move the camera. And he spent so much time screaming at this protester, and, frankly, it was a disgrace. And he shouldn't be there to start off with.

Trump even advised the crowd to go back, watch and "study" Obama's reaction.

Well, a lot of people did. And guess what? Obama wasn't "screaming" at the protester. Quite the opposite, actually.

In fact, Obama dealt with the interruption so well, I'd like to personally thank Trump for bringing this to our attention and driving nail number 9,352 into Trump's coffin.

People on Twitter jumped at the chance to call him out for lying — again.

CNN put together a video of the Trump lies vs Obama reality.

When Obama's speech is cut off by a man waving a Trump sign, the president spends roughly a minute trying to quiet down the crowd. He says,

Hold up, hold up. Hey, hold up. HEY. Hey, listen. Listen to what I'm saying. Everybody sit down and be quiet for a second. Now listen up, I'm serious. Listen up. You've got an older gentleman who is supporting his candidate. He's not doing nothing. You don't have to worry about him.

Obama added it's distractions like these that have led to one crazy election.

If we lose focus, we could have problems. This is part of what's happened here in election season. We just get stirred up for all kinds of reasons that are unnecessary. Just relax.