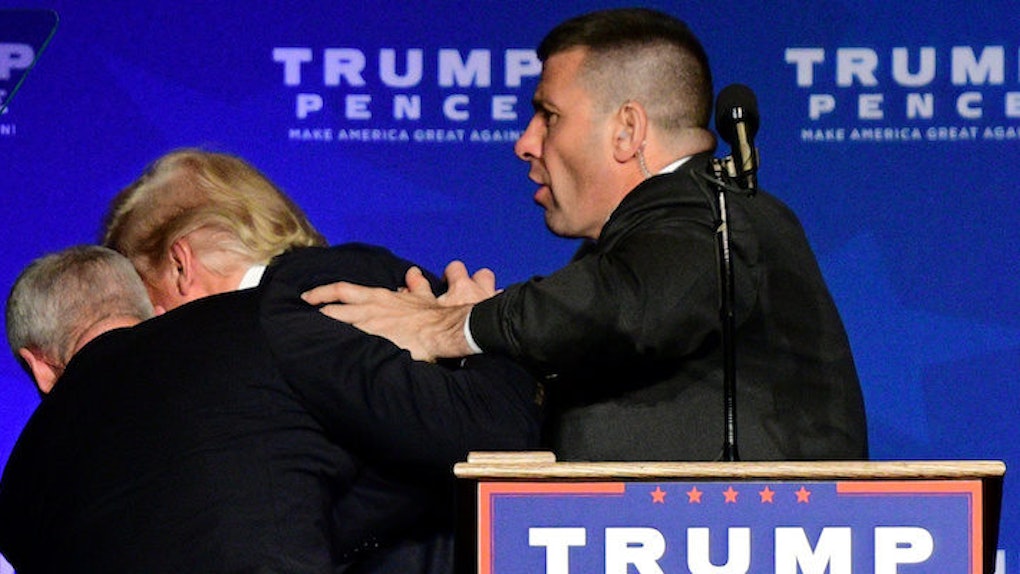 It's not like Donald Trump to have a flair for the dramatic.

But last night, the presidential candidate was rushed off stage by the Secret Service after they spotted an assumed threat in the audience.

He was bundled away by two men after someone shouted "gun" at the event in Reno, Nevada.

The footage shows Trump talking to the crowd moments before the drama unfolds. He says,

Suddenly, he's cut off by a ruckus at the front of the audience. Trump shields his eyes from the lights so he can see what's going on before his detail swoops in, bend his head down and rush him off stage.

A man was tackled to the ground and searched by authorities. No weapon was found.

This evening at approximately 9:05 pm, at a presidential nominee Trump rally in Reno, Nevada, Mr Trump was removed from stage by his Secret Service protective detail after a commotion occurred in the crowd. Immediately in front of the stage, an unidentified individual shouted "gun." Secret Service agents and Reno Police officers immediately apprehended the subject. Upon a thorough search of the subject and the surrounding area, no weapon was found.

A thorough investigation is ongoing at this time by the US Secret Service and the Reno Police Department. Candidate Trump ultimately returned to the stage and continued with his remarks.

But it looked like Trump's Secret Service weren't the only people trigger-happy that night.

The man behind Trump's social media, Dan Scavino Jr., jumped on the incident, completely blowing it out of proportion to attack Hillary Clinton.

He retweeted Jack Posobiec, a self-proclaimed recovering political operative, saying Trump was back on stage minutes after the "assassination attempt" even though no weapon or credible threat was found.

The election is Tuesday, November, 8.