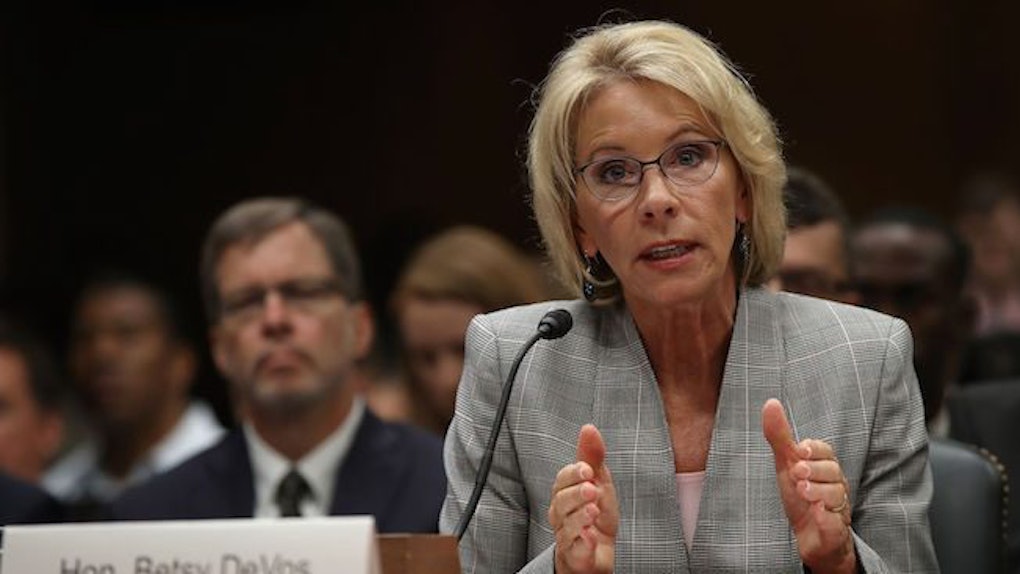 Secretary of Education Betsy DeVos, who was nominated by President Donald Trump, gave remarks on Thursday, Sept. 7 about her plans for Title IX, the landmark law that protects students from gender discrimination. Specifically, DeVos spoke about how she plans to change the government's Title IX work when it comes to sexual violence. But DeVos' Title IX speech got a major concept about sexual violence wrong, and we have to talk about it.

Title IX is a federal law that requires schools to allow for equal opportunities for all students, regardless of gender. Over time, that has come to mean that schools must protect students from sexual violence, which can limit opportunities to education. In 2011, the Obama administration sent a "Dear Colleague" letter to schools clarifying that they are required to handle sexual violence cases in an immediate, timely manner, with investigations using a "preponderance of evidence" to determine their conclusions (which basically means investigations find that it was more likely than not that the violence happened, End Rape On Campus explains).

DeVos said in the speech,

The truth is that the system established by the prior administration has failed too many students. Survivors, victims of a lack of due process and campus administrators have all told me that the current approach does a disservice to everyone involved.

Basically, what she was intimating is that the Obama-era Title IX system is bad in part because people who did not commit assault may have been punished for it and that it makes it too easy to find someone guilty of assault. She mentioned the lawsuits people accused of assault have filed against schools. So because someone might be found guilty when they weren't, DeVos wants to overhaul the system to some extent.

This tweet from HuffPost editor Alanna Vagianos sums up the bad logic in DeVos' thoughts:

There's a harmful myth that Title IX empowers women on campus to go around accusing everyone of sexual assault out of vengeance or some such bullsh*t. The reality is that there are very few false accusations of rape, on campuses and throughout the rest of the country. Meanwhile, very few cases conclude in legitimate punishment.

A 2010 study of 10 years' worth of a university's campus assault data found that just 2 to 10 percent of accusations were false. And in terms of those people's lives being ruined from false accusations, there's not all that much majority evidence there -- aside from anecdotes DeVos brought up. A 2014 HuffPost analysis found that of students found responsible for sexual assault, only 30 percent were expelled.

For DeVos to say that the Obama-era Title IX system presents equal threats to the campus safety of both survivors and the "innocent accused" is bullsh*t. That's all.